angular-cli where is webpack.config.js file - new angular6 does not support ng eject

With Angular CLI 6 you need to use builders as ng eject is deprecated and will soon be removed in 8.0

UPDATE: November 2016: angular-cli now only use webpack. You only need install normally with npm install -g angular-cli. "We changed the build system between beta.10 and beta.14, from SystemJS to Webpack.", but actually i use angular-cli just to firs structure and folders and then anymore, i use webpack config manually

I've installed angular cli with this:

When I worked with angular1 and web pack , i used to modify "webpack.config.js" file to execute all the task and plugins, but i don't see on this project created with angular-cli who does it work. it's magic?

I see Webpack is working when i do:

but i don't understand the way that angular-cli config works...

This will generate webpack.config.js in the root folder of your project, and you're free to configure it the way you want. The downside of this is that build/start scripts in your package.json will be replaced with the new commands and instead of

According to this issue, it was a design decision to not allow users to modify the Webpack configuration to reduce the learning curve.

Considering the number of useful configuration on Webpack, this is a great drawback.

I would not recommend using angular-cli for production applications, as it is highly opinionated.

With Angular CLI 6 you need to use builders as ng eject is deprecated and will soon be removed in 8.0. That's what it says when I try to do an ng eject 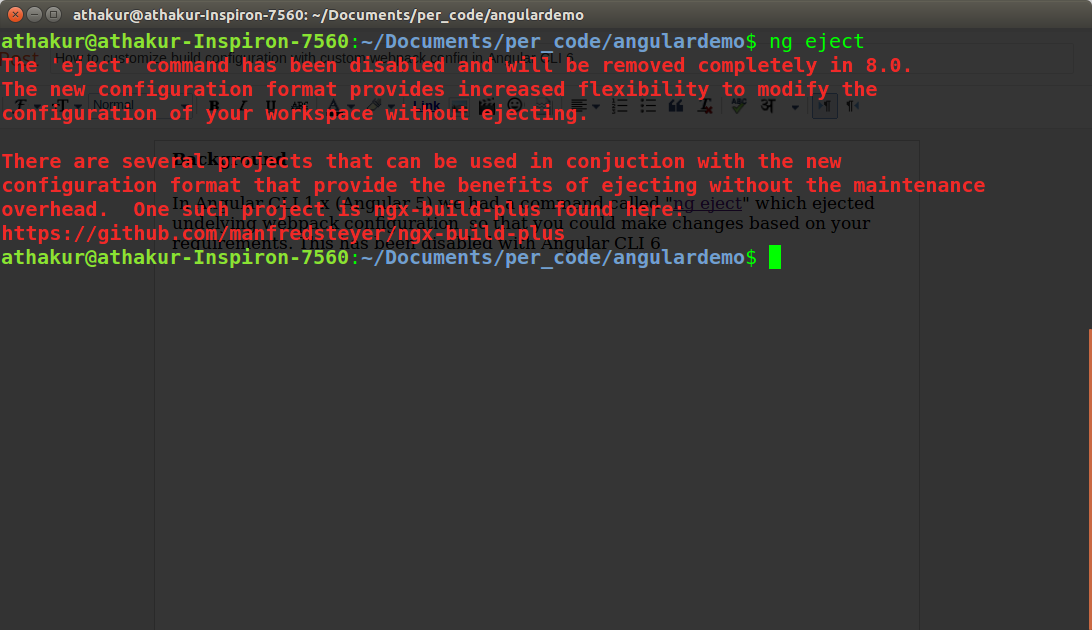 but essentially you add following dependencies -

Notice the change in builder again for serve target. Post these changes you can create a file called custom-webpack.config.js in your same root directory and add your webpack config there.

However, unlike ng eject configuration provided here will be merged with default config so just add stuff you want to edit/add.

You can hack the config template in angular-cli/addon/ng2/models. There's no official way to modify the webpack config as of now.

There's a closed "wont-fix" issue on github about this: https://github.com/angular/angular-cli/issues/1656

What I am thinking is having webpack would be easy when production release.

Not the answer you're looking for? Browse other questions tagged angular webpack angular-cli or ask your own question.

125
How do I correctly upgrade angular 2 (npm) to the latest version?
299
How to add bootstrap to an angular-cli project
87
Angular Cli Webpack, How to add or bundle external js files?
4
No such file or directory error on command 'ng-build'
13
Where is the webpack.config.js in angular-cli new project?
3
Angular cli server-side rendering without ng eject
0
Error setting up new project with angular/cli
0
Angular Cli: after eject i can't use ng commands parameters, any alternatives for ng params?
60
Load new modules dynamically in run-time with Angular CLI & Angular 5