Why the debugger won't take me to the line that generated an AV?

I have a program that started to crash on shutdown. The debugger shows:

When I click Continue, I see the same error. When I click 'Break' the IDE will open the EMemLeaks.pas unit.

The program is compiled in 'Debug' mode with ALL debugging info included. Map file is set to Details. 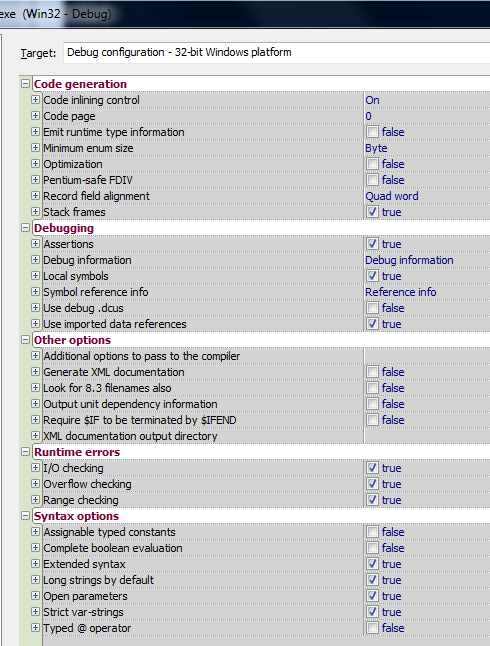 Also, I only use FreeAndNil instead of Free in MY code (but not in the 3rd party libraries). 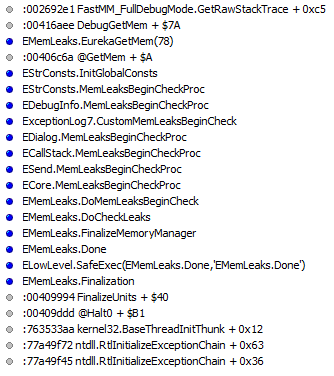 The crash appears somewhere after "Application.Run". This means that all my clean up code got executed. Right?

Questions:
1. Are the settings above correct? If not, what to change?
2. What does it mean when the debugger cannot put the cursor on the code that generated the problem?
3. Is this an indication that the error is outside my code?

Update (all roads lead to Eureka):

I managed to remove ALL code in my project. This is all that is left:

Even more, running a procedure called GenerateCrash will generate EXACTLY the same AV as the one that I get when I shut down the program (and Eureka is active): $C0000005.

Makes you think. Right? Plus, the EurekaLog support abandoned this issue. Probably they now know about the issue and it will be fixed in some future version (which I won't be able to access). I see that in EACH release they list quite a number of serious bugs. Since their "v7.0 Hot-fix 1" release they introduced 110 features and fixed 271 bugs. Basically with each new featured introduce they also introduced almost 3 bugs! EurekaLog must be ONE OF THE THE MUST BUGGY software products ever!

If you enable Debug DCUs then you are more likely to have success. Doing so gives the debugger access to debug info for RTL/VCL code.

Look at the EurekaLog stack trace though. That should have all you need to explain this.

Looking at your stack trace the AV is raised in an external DLL, that implements the debug version of FastMM. You won't learn anything by looking at that code. You need to study the stack trace to solve your problem. The answer will not be found where the access violation is raised. Memory corruption errors are frequently of this nature. The error is raised far away from the defect.

Do be aware that debug FastMM sometimes does raise AV exceptions that it subsequently ignores. These can be very misleading. That could be happening for you. However I have not encountered that at shutdown so I still suspect you have a real defect.

That said, the defect could well be in EurekaLog or in how you have configured it. If you want my advice I recommend madExcept rather than EurekaLog.

Not the answer you're looking for? Browse other questions tagged delphi debugging crash access-violation eurekalog or ask your own question.

421
How do you launch the JavaScript debugger in Google Chrome?
602
How to automatically generate a stacktrace when my program crashes
224
Starting python debugger automatically on error
530
Debugging with command-line parameters in Visual Studio
277
Firebug-like debugger for Google Chrome
250
Editing in the Chrome debugger
273
Release generating .pdb files, why?
209
Eclipse debugger always blocks on ThreadPoolExecutor without any obvious exception, why?
8
How do I trace an intermittent crash that occurs only under the debugger, but is not caught by it?
246
Attach IntelliJ IDEA debugger to a running Java process