How do I generate UML diagram based on existing classes in PHP?

Install it on the command line via:

(This used to be $ pear install pear/php_uml-alpha but the package has since gone stable.)

I strongly recommend BOUML which:

phUML is fully automatic UML class diagramm generator written in PHP, licensed under the BSD license. It is capable of parsing any PHP5 object oriented source code and create an appropriate image representation of the oo structure based on the UML specification. 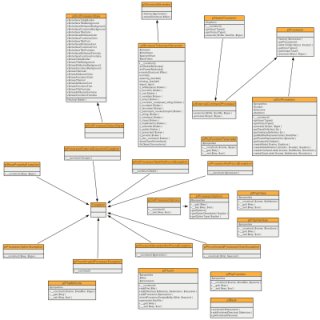 the best (Windows) software i have found to do PHP and UML is Sparx Systems Enterprise Architect. besides a pletora of features, it supports the following for PHP:

Have you tried Autodia yet? Last time I tried it it wasn't perfect, but it was good enough.

There's also php2xmi. You have to do a bit of manual work, but it generates all the classes, so all you have to do is to drag them into a classdiagram in Umbrello.

Otherwise, generating a diagram with the use of reflection and graphviz, is fairly simple. I have a snippet over here, that you can use as a starting point.

Here's how I did it (directly from code to PDF drawing without manual drawing of anything):

As an alternative you could try PHP_UML or php2xmi instead of BOUML for doing the "reverse engineering" part. I haven't yet tried that.

If you prefer drawing the class diagram by hand (instead of using computer to do all the drawing), you can use either BOUML or ArgoUML for the drawing. Using the "reverse engineered" data via BOUML will help in that case.

If you are looking to generate UML easily from your existing PHP Classes you might want to consider PHPStorm 3.0 IDE. It does a good job of replicating existing code into UML.

Have a look at the PHP Storm feature list.

In theory you can use PhpStorm to visualise your classes using UML. The generation is not really great but you can effectively refactor stuff and again, at least preview parents, implementations, constants, attributes, methods and their visibility in a nice way.

I want to visualise a communication between already existing components to a colleague.

Anyway, after some painful hour of work I was only able to generate unrelated boxes and had to use additional program to link relations. Really bad. But I believe once they make it work properly it will be a great feature because as the code changes, the diagrams would be automatically updated!

For now, don't use PhpStorm for UML diagrams.

You can use Visual Paradigm for UML. This might not be the best paid (it's US$699) product, just as an option if anyone would like to try. It can create class diagram from PHP and vice versa, and not only PHP, there's a bunch of language you can choose such as C#, C++, Ruby, Java, VB.NET, Python, Objective C, Perl, etc. There's also a trial you can check on.

Well to be honest, first and foremost you shouldn't generate UML model from code, but code from UML model ;).

Even if you are in a rare situation, when you need to do this reverse engineering, it is generally suggested that you do it by hand or at least tidy-up the diagrams, as auto-generated UML has really poor visual (=information) value most of the time.

If you just need to generate the diagrams, it's probably a good thing to ask yourself why exactly? Who is the intended audience and what is the goal? What does the auto-generated diagram have to offer, what code doesn't?

Basicly I accept only one answer to that question. It just got too big and incomprehensible.

Which again is a reason to start with UML in the first place, as opposed to start coding ;) It's called analysis and it's on decline, because every second guy in business thinks it's a bit too expensive and not really necessary.

Not the answer you're looking for? Browse other questions tagged php uml class-diagram or ask your own question.

444
How to generate UML diagrams (especially sequence diagrams) from Java code?
1256
Enumerations on PHP
2849
Deleting an element from an array in PHP
1228
Secure hash and salt for PHP passwords
1432
How do I make a redirect in PHP?
1326
How to get the client IP address in PHP
4865
Reference — What does this symbol mean in PHP?
2178
How does PHP 'foreach' actually work?
2641
Why shouldn't I use mysql_* functions in PHP?