How to make [DebuggerNonUserCode] hide an exception from the debugger in simple test case?

2) This sample code placed within some class and called during startup:

Expected result is that TestIgnoreException() runs silently and returns false.

Actual result is the debugger stops in TestIgnoreException() even though there should be no exception being processed at that scope. 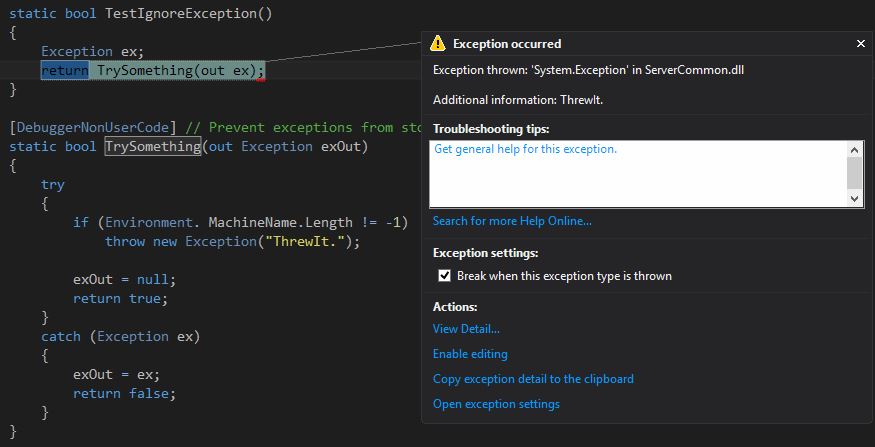 The motivation is for cases where some API that is out of your control does not provide a "Try" method and instead only indicates failure by using exceptions.

One of numerous such examples is .NET TcpClient.Connect(host, port). Say a program always tests some connections during startup, the debugger should not stop on this particular section of code each time.

Using the standard "break when thrown" exceptions checkboxes is is not good because it works globally by type. It cannot be configured to work locally. Also other developers who check out the code should automatically skip the exception as well.

Mystery solved. It is indeed a known issue that is new to MSVS 2015 because of added exception handling optimizations.

Don't stop debugger at THAT exception when it's thrown and caught

Not the answer you're looking for? Browse other questions tagged c# debugging exception visual-studio-2015 attributes or ask your own question.

92
Don't stop debugger at THAT exception when it's thrown and caught
43
Visual Studio debugging - ignore exception in one place while breaking at it elsewhere?
20
How to tell the debugger to ignore breaking on thrown exceptions?
8
Prevent debugger from stopping on an Exception in a Compiled LambdaExpression
1
Visual Studio 2015 debugger stops for a handled exception of a DebuggerHidden function
1
How to toggle “Just my code” within code?

869
How do you test that a Python function throws an exception?
2068
How do you assert that a certain exception is thrown in JUnit 4 tests?
516
What are the effects of exceptions on performance in Java?
472
The case against checked exceptions
819
How to properly ignore exceptions
841
How to print an exception in Python?
1243
How to make an HTTP POST web request
1177
Reference - What does this error mean in PHP?
222
What makes the Visual Studio debugger stop evaluating a ToString override?
1
Visual Studio 2015 debugger stops for a handled exception of a DebuggerHidden function