Can any of you explain what the differences are between throw, throws and Throwable and when to use which? 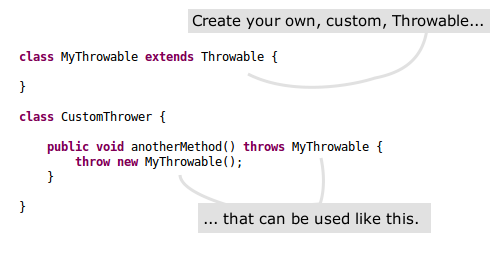 See here for a tutorial on using exceptions.

This really easy to understand.

The key word throws is used in method declaration, this specify what kind of exception[Throwable class] we may expect from this method.

The key word throw is used to throw an object that is instance of class Throwable.

Lest see some example:

We create ourself an exception class

The we create a method that create a object from our exception class and throws it using key word throw.

When we are going to use method throwMeAException(), we are forced to take care of it in specific way because we have the information that it throws something, in this case we have three options.

First option is using block try and catch to handle the exception:

Second option is to pass the exception

Third options is to catch and re-throw the exception

Resuming, when You need to stop some action you can throw the Exception that will go back till is not server by some try-catch block. Wherever You use method that throws an exception You should handle it by try-catch block or add the declarations to your methods.

The exception of this rule are java.lang.RuntimeException those don't have to be declared. This is another story as the aspect of exception usage.

throw - It is used to throw an Exception.The throw statement requires a single argument : a throwable class object

Throwable - This is the superclass of all errors and exceptions in the Java language. you can throw only objects that derive from the Throwable class. throwable contains a snapshot of the execution stack of its thread at the time it was created

Throw is used for throwing exception, throws (if I guessed correctly) is used to indicate that method can throw particular exception, and the Throwable class is the superclass of all errors and exceptions in the Java

How to Throw Exceptions

is used to actually throw the exception, whereas throws is declarative for the method. They are not interchangeable.

This is to be used when you are not using the try catch statement in your code but you know that this particular class is capable of throwing so and so exception(only checked exceptions). In this you do not use try catch block but write using the throw clause at appropriate point in your code and the exception is thrown to the caller of the method and is handled by it. Also the throws keyword is used when the function may throw a checked exception.

Runtime Exceptions are exceptions that occur at runtime and the developer should not try to catch it or stop it. You only write code to avoid them or issue a command throw, when the error criteria is met. We use throw inside the method body.

However for Checked Exceptions, the JVM expects you to handle it and will give compiler error if not handled so you declare that it throws that type of exception as seen below in the clone() method.

Same answer as above but with copy-paste pleasure:

Not the answer you're looking for? Browse other questions tagged java exception-handling throw throws throwable or ask your own question.