How fast is Perl's smartmatch operator when searching for a scalar in an array?

I want to repeatedly search for values in an array that does not change.

So far, I have been doing it this way: I put the values in a hash (so I have an array and a hash with essentially the same contents) and I search the hash using exists.

I don't like having two different variables (the array and the hash) that both store the same thing; however, the hash is much faster for searching.

I found out that there is a ~~ (smartmatch) operator in Perl 5.10. How efficient is it when searching for a scalar in an array?

If you want to search for a single scalar in an array, you can use List::Util's first subroutine. It stops as soon as it knows the answer. I don't expect this to be faster than a hash lookup if you already have the hash, but when you consider creating the hash and having it in memory, it might be more convenient for you to just search the array you already have.

As for the smarts of the smart-match operator, if you want to see how smart it is, test it. :)

Now, before I start this benchmark, I expect that if the smart match can short circuit (and it can; its documented in perlsyn), that the best case times will stay the same despite the array size, while the other ones get increasingly worse. If it can't short circuit and has to scan the entire array every time, there should be no difference in the times because every case involves the same amount of work.

Here's how the various parts did. Note that this is a logarithmic plot on both axes, so the slopes of the plunging lines aren't as close as they look: 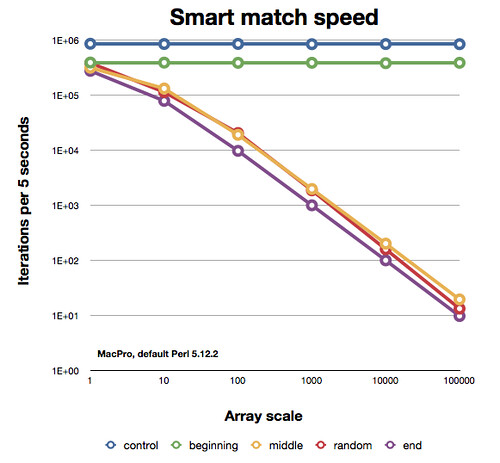 So, it looks like the smart match operator is a bit smart, but that doesn't really help you because you still might have to scan the entire array. You probably don't know ahead of time where you'll find your elements. I expect a hash will perform the same as the best case smart match, even if you have to give up some memory for it.

Okay, so the smart match being smart times two is great, but the real question is "Should I use it?". The alternative is a hash lookup, and it's been bugging me that I haven't considered that case.

As with any benchmark, I start off thinking about what the results might be before I actually test them. I expect that if I already have the hash, looking up a value is going to be lightning fast. That case isn't a problem. I'm more interested in the case where I don't have the hash yet. How quickly can I make the hash and lookup a key? I expect that to perform not so well, but is it still better than the worst case smart match?

Before you see the benchmark, though, remember that there's almost never enough information about which technique you should use just by looking at the numbers. The context of the problem selects the best technique, not the fastest, contextless micro-benchmark. Consider a couple of cases that would select different techniques:

Now, keeping those in mind, I add to my previous program:

Here's the plot. The colors are a bit difficult to distinguish. The lowest line there is the case where you have to create the hash any time you want to search it. That's pretty poor. The highest two (green) lines are the control for the hash (no hash actually there) and the existing hash lookup. This is a log/log plot; those two cases are faster than even the smart match control (which just calls a subroutine). 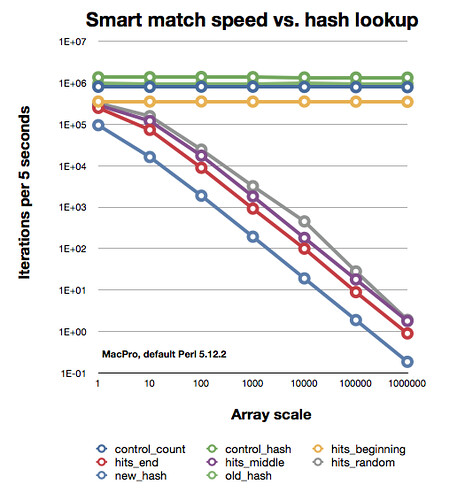 There are a few other things to note. The lines for the "random" case are a bit different. That's understandable because each benchmark (so, once per array scale run) randomly places the hit elements in the candidate array. Some runs put them a bit earlier and some a bit later, but since I only make the @random array once per run of the entire program, they move around a bit. That means that the bumps in the line aren't significant. If I tried all positions and averaged, I expect that "random" line to be the same as the "middle" line.

Now, looking at these results, I'd say that a smart-match is much faster in its worst case than the hash lookup is in its worst case. That makes sense. To create a hash, I have to visit every element of the array and also make the hash, which is a lot of copying. There's no copying with the smart match.

Here's a further case I won't examine though. When does the hash become better than the smart match? That is, when does the overhead of creating the hash spread out enough over repeated searches that the hash is the better choice?

Fast for small numbers of potential matches, but not faster than the hash. Hashes are really the right tool for testing set membership. Since hash access is O(log n) and smartmatch on an array is still O(n) linear scan (albeit short-circuiting, unlike grep), with larger numbers of values in the allowed matches, smartmatch gets relatively worse.

The "smart" in "smart match" isn't about the searching. It's about doing the right thing at the right time based on context.

The question of whether it's faster to loop through an array or index into a hash is something you'd have to benchmark, but in general, it'd have to be a pretty small array to be quicker to skim through than indexing into a hash.

Not the answer you're looking for? Browse other questions tagged perl smartmatch or ask your own question.

16
Perl: Good way to test if a value is in an array?
2
Searching unsorted array in perl?
2
How to get an unique element from two arrays in Perl

1
How do I create and access a Perl hash with scalar keys whose values are arrays?
1
Can I use smart matching, ~~, in Test::More's cmp_ok?
9
Why does smartmatch return different values depending on the order of the operands?
2
How can this perl sub be optimised for speed?
21
Ways to Flatten A Perl Array in Scalar Context
0
Assigning scalars from a subroutine which returns an array in Perl
0
Perl, Define scalar variables out of an array
14
How are scalars stored 'under the hood' in perl?
3
“=~” and “!~” operator makes odd hash count in Perl when passed in a subroutine
4
Why do people say Perl is dynamically typed?