How to debug Ruby scripts [closed]

I copied the following Ruby code from the Internet and made a few changes but it doesn't work.

What can I do to debug the program by myself?

As of pry 0.12.2 however, there are no navigation commands such as next, break, etc. Some other gems additionally provide this, see for example pry-byedebug.

As banister recommended: use pry! I can only agree on this.

pry is a much better repl than irb.

You need to add

Once your program hits the

line, you'll be thrown right into the pry repl, with all the context of your program right at hand, so that you can simply explore everything around, investigate all objects, change state, and even change code on the fly.

I believe you can not change the code of the method that you are currently in, so you can sadly not change the next line to be executed. But good ruby code tends to be single line anyway ;-)

Debugging by raising exceptions is far easier than squinting through print log statements, and for most bugs, its generally much faster than opening up an irb debugger like pry or byebug. Those tools should not always be your first step.

1. Fast Method: Raise an Exception then and .inspect its result

The fastest way to debug Ruby (especially Rails) code is to raise an exception along the execution path of your code while calling .inspect on the method or object (e.g. foo):

In the above code, raise triggers an Exception that halts execution of your code, and returns an error message that conveniently contains .inspect information about the object/method (i.e. foo) on the line that you're trying to debug.

This technique is useful for quickly examining an object or method (e.g. is it nil?) and for immediately confirming whether a line of code is even getting executed at all within a given context.

2. Fallback: Use a ruby IRB debugger like byebug or pry

Only after you have information about the state of your codes execution flow should you consider moving to a ruby gem irb debugger like pry or byebug where you can delve more deeply into the state of objects within your execution path.

When you are trying to debug a problem, good advice is to always: Read The !@#$ing Error Message (RTFM)

That means reading error messages carefully and completely before acting so that you understand what it's trying to tell you. When you debug, ask the following mental questions, in this order, when reading an error message:

In the stack trace pay particular attention to lines of code that come from your project (e.g. lines starting with app/... if you are using Rails). 99% of the time the problem is with your own code.

To illustrate why interpreting in this order is important...

E.g. a Ruby error message that confuses many beginners:

You execute code that at some point executes as such:

and you get an error that states:

Beginners see this error and think the problem is that the method bar is undefined. It's not. In this error the real part that matters is:

for Nil:nilClass means that @foo is Nil! @foo is not a Foo instance variable! You have an object that is Nil. When you see this error, it's simply ruby trying to tell you that the method bar doesn't exist for objects of the class Nil. (well duh! since we are trying to use a method for an object of the class Foo not Nil).

Unfortunately, due to how this error is written (undefined method "bar" for Nil:nilClass) its easy to get tricked into thinking this error has to do with bar being undefined. When not read carefully this error causes beginners to mistakenly go digging into the details of the bar method on Foo, entirely missing the part of the error that hints that the object is of the wrong class (in this case: nil). It's a mistake that's easily avoided by reading error messages in their entirety.

Always carefully read the entire error message before beginning any debugging. That means: Always check the class type of an object in an error message first, then its methods, before you begin sleuthing into any stacktrace or line of code where you think the error may be occurring. Those 5 seconds can save you 5 hours of frustration.

tl;dr: Don't squint at print logs: raise exceptions or use an irb debugger instead. Avoid rabbit holes by reading errors carefully before debugging.

deletes all the things

Okay, so if you're not opposed to trying out a new IDE you can do the following for free.

After doing all that fun stuff, you should be able to set breakpoints and debug in a menu similar to this for mid-2017 and a darker theme: 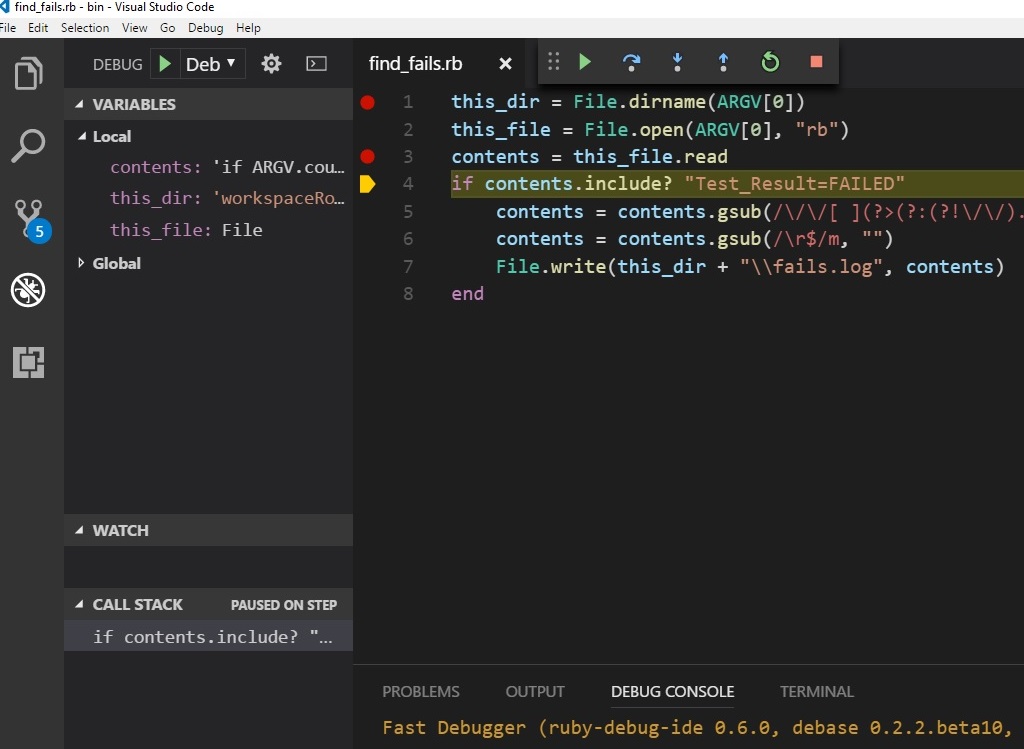 with all the fun stuff like your call stack, variable viewer, etc.

The biggest PITA is 1) installing the pre-reqs and 2) Remembering to configure the .vscode\launch.json file. Only #2 should add any baggage to future projects, and you can just copy a generic enough config like the one listed above. There's probably a more general config location, but I don't know off the top of my head.

I strongly recommend this video, in order to pick the proper tool at the moment to debug our code.

Personally, I'd highlight two big topics in this video.

Then every time when debugger console is shown, you can choose:

In case the script just hangs and you need a backtrace, try using lldb/gdb like:

and then check your process foreground.

All other answers already give almost everything... Just a little addition.

If you want some more IDE-like debugger (non-CLI) and are not afraid of using Vim as editor, I suggest Vim Ruby Debugger plugin for it.

Its documentation is pretty straightforward, so follow the link and see. In short, it allows you to set breakpoint at current line in editor, view local variables in nifty window on pause, step over/into — almost all usual debugger features.

For me it was pretty enjoyable to use this vim debugger for debugging a Rails app, although rich logger abilities of Rails almost eliminates the need for it.

I just discovered this gem ( turns Pry into a debugger for MRI Ruby 2.0+ )

then use exactly like pry, mark the line you want to break at:

Unlike vanilla pry however, this gem has some key GDB-like navigation commands such as next, step and break:

As of Ruby 2.4.0, it is easier to start an IRB REPL session in the middle of any Ruby program. Put these lines at the point in the program that you want to debug:

You can run Ruby code and print out local variables. Type Ctrl+D or quit to end the REPL and let Ruby program keep running.

You can also use puts and p to print out values from your program as it is running.

If you are using RubyMine, debugging ruby scripts is simple and straightforward.

Suppose you have a Ruby script hello_world.rb

Set a breakpoint at line 6 as below.

Now you can just start the debugger to run the script: 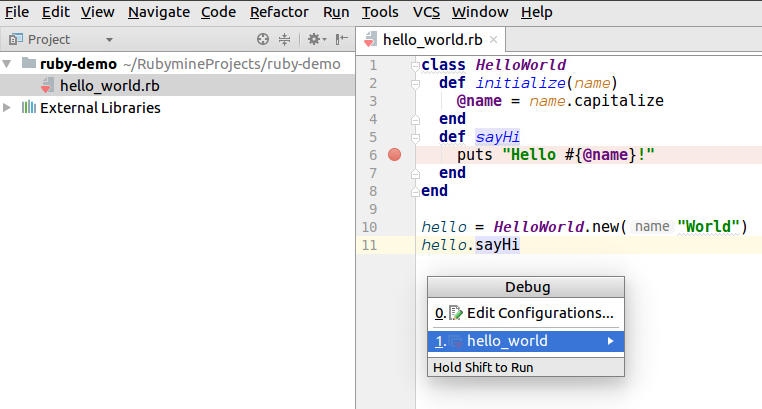 Then when the execution hits a breakpoint, you'll be able to inspect variables, etc.

Further information for your reference

There has always been a controversy around debugging techniques, some people like to debug by print statements, some other ones like to dig deep with a debugger.

I'd suggest that you try both approaches.

Actually one of the old Unix men recently said, that printf debugging was a faster way to go for him at some points.

But if you are new at some job and need to understand a big blob of code, then it's really usefull to step throughout there, putting some breakpoints here and there, going along with it how it works.

It should give you some understanding how the code is weaved.

If you are new to some other peoples software, It might help you to step through there.

You'll quickly find out if they arranged it in a clever way, or if that's just a bunch of shit.

Well, ruby standard lib has an easy to use gdb-like console debugger: http://ruby-doc.org/stdlib-2.1.0/libdoc/debug/rdoc/DEBUGGER__.html No need to install any extra gems. Rails scripts can be debugged that way too.

The mother of all debugger is plain old print screen. Most of the time, you probably only want to inspect some simple objects, a quick and easy way is like this:

This will print out the contents of @result to STDOUT with a line in front for easy identification.

Bonus if you use a autoload / reload capable framework like Rails, you won't even need to restart your app. (Unless the code you are debugging is not reloaded due to framework specific settings)

I find this works for 90% of the use case for me. You can also use ruby-debug, but I find it overkill most of the time.

There is many debuggers with different features, based on which you make choice. My priorities was satisfied with pry-moves which was:

Not the answer you're looking for? Browse other questions tagged ruby debugging or ask your own question.

1
Is it possible to run a program step by step in Ruby?
28
How to debug ruby code?
9
Ruby hash error: undefined method []
5
How does Ruby chaining work?
5
Question about “gets” in ruby
4
How Do You Put 'gets' Input Into An Array?
8
Check why ruby script hangs
5
ruby instance_variable_get returns nil
1
Ruby / Rails debugging strategy
2
An error occurred while installing debugger (1.6.6)
See more linked questions

459
Is there a “do … while” loop in Ruby?
1155
How to understand nil vs. empty vs. blank in Ruby
2127
How to write a switch statement in Ruby
1609
How do I debug Node.js applications?
1354
How to check if a value exists in an array in Ruby
1664
How do I remedy “The breakpoint will not currently be hit. No symbols have been loaded for this document.” warning?
534
“The breakpoint will not currently be hit. The source code is different from the original version.” What does this mean?
673
What is a stack trace, and how can I use it to debug my application errors?
1050
What is attr_accessor in Ruby?