Conda environments not showing up in Jupyter Notebook

The problem is that Jupyter Notebook does not recognize the new environment I just created. No matter I start Jupyter Notebook from the GUI Navigator or from the command line within the tensorflow env, there is only one kernel in the menu called Python [Root], and Tensorflow cannot be imported. Of course, I clicked on that option multiple times, saved file, re-opened, but these did not help.

Strangely, I can see the two environments when I open the Conda tab on the front page of Jupyter. But when I open the Files tab, and try to new a notebook, I still end up with only one kernel.

I looked at this question: Link Conda environment with Jupyter Notebook But there isn't such a directory as ~/Library/Jupyter/kernels on my computer! This Jupyter directory only has one sub-directory called runtime.

I am really confused. Are Conda environments supposed to become kernels automatically? (I followed https://ipython.readthedocs.io/en/stable/install/kernel_install.html to manually set up the kernels, but was told that ipykernel was not found.)

I don't think the other answers are working any more, as conda stopped automatically setting environments up as jupyter kernels. You need to manually add kernels for each environment in the following way:

If your environments are not showing up, make sure you have installed

nb_conda_kernels should be installed in the environment from which you run Jupyter Notebook or JupyterLab. This might be your base conda environment, but it need not be. For instance, if the environment notebook_env contains the notebook package, then you would run

To utilize an R environment, it must have the r-irkernel package; e.g.

For other languages, their corresponding kernels must be installed.

In addition to Python, by installing the appropriatel *kernel package, Jupyter can access kernels from a ton of other languages including R, Julia, Scala/Spark, JavaScript, bash, Octave, and even MATLAB.

Note that at the time originally posting this, there was a possible cause from nb_conda not yet supporting Python 3.6 environments.

If other solutions fail to get Jupyter to recognize other conda environments, you can always install and run jupyter from within a specific environment. You may not be able to see or switch to other environments from within Jupyter though.

Notice that I am running Python 3.6.1 in this notebook: 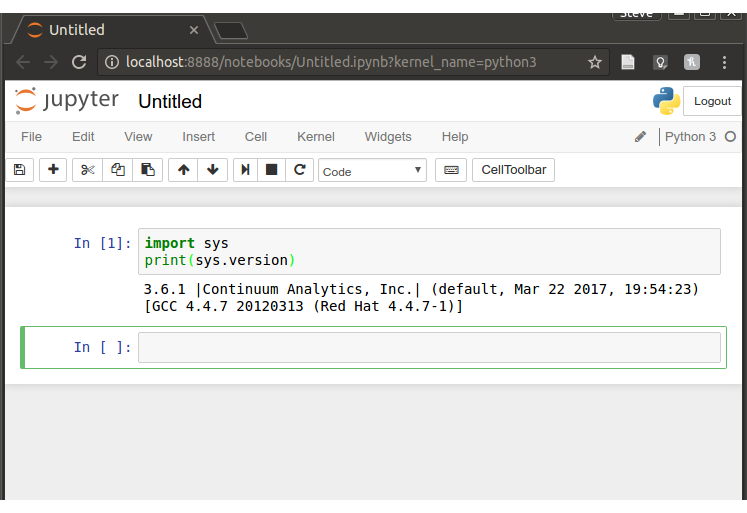 Note that if you do this with many environments, the added storage space from installing Jupyter into every environment may be undesirable (depending on your system).

The annoying thing is that in your tensorflow environment, you can run jupyter notebook without installing jupyter in that environment. Just run

and the tensorflow environment should now be visible in Jupyter Notebooks started in any of your conda environments as something like Python [conda env:tensorflow].

I had to run all the commands mentioned in the top 3 answers to get this working:

Just run conda install ipykernel in your new environment, only then you will get a kernel with this env. This works even if you have different versions installed in each envs and it doesn't install jupyter notebook again. You can start youe notebook from any env you will be able to see newly added kernels.

I am going to post an alternative and simpler solution for the following case:

I am going to use the name 'test_env' for the environment for the rest of the solution. Also, note that 'python3' is the name of the kernel.

The currently top-voted answer does work, but there is an alternative. It says to do the following:

This will give you the option of using the test_env environment regardless of what environment you launch jupyter notebook from. But, launching a notebook with 'python3' will still use the Python installation from the base environment.

What likely is happening is that there is a user python3 kernel that exists. Run the command jupyter kernelspec list to list all of your environments. For instance, if you have a mac you will be returned the following (my user name is Ted).

What Jupyter is doing here is searching through three different paths looking for kernels. It goes from User, to Env, to System. See this document for more details on the paths it searches for each operating system.

The two kernels above are both in the User path, meaning they will be available regardless of the environment that you launch a jupyter notebook from. This also means that if there is another 'python3' kernel at the environment level, then you will never be able to access it.

To me, it makes more sense that choosing the 'python3' kernel from the environment you launched the notebook from should execute Python from that environment.

You can check to see if you have another 'python3' environment by looking in the Env search path for your OS (see the link to the docs above). For me (on my mac), I issued the following command:

And I indeed had a 'python3' kernel listed there.

Thanks to this GitHub issue comment (look at the first response), you can remove the User 'python3' environment with the following command:

Now when you run jupyter kernelspec list, assuming the test_env is still active, you will get the following:

Notice that this path is located within the test_env directory. If you create a new environment, install jupyter, activate it, and list the kernels, you will get another 'python3' kernel located in its environment path.

It also seems that this User 'python3' is not installed for everyone by default, so not everyone is confronted by this issue.

To add a conda environment to Jupyter:

(in the conda environment where you run jupyter notebook) will make all conda envs available automatically. For access to other environments, the respective kernels must be installed. Here's the ref.

This worked for me in windows 10 and latest solution :

(NOTE : Include the quotes around "your_env_name", in step 3)

The nb_conda_kernels package is the best way to use jupyter with conda. With minimal dependencies and configuration, it allows you to use other conda environments from a jupyter notebook running in a different environment. Quoting its documentation:

This package is designed to be managed solely using conda. It should be installed in the environment from which you run Jupyter Notebook or JupyterLab. This might be your base conda environment, but it need not be. For instance, if the environment notebook_env contains the notebook package, then you would run

To utilize an R environment, it must have the r-irkernel package; e.g.

For other languages, their corresponding kernels must be installed.

Then all you need to do is start the jupyter notebook server: 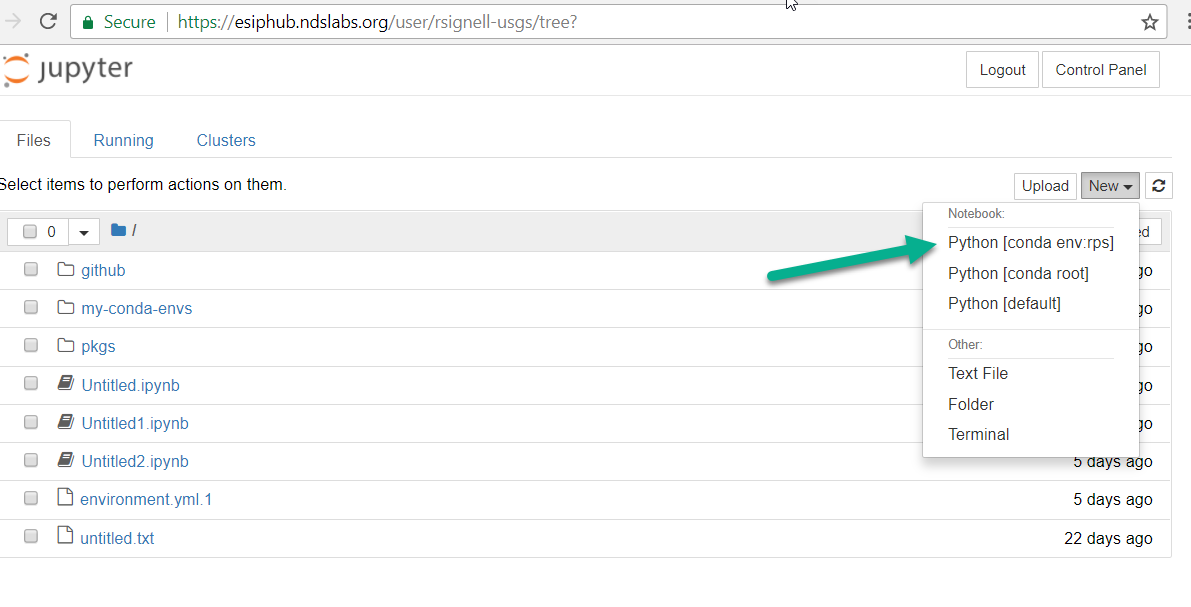 Despite the plethora of answers and @merv's efforts to improve them, it still hard to find a good one. I made this one CW, so please vote it to the top or improve it!

We have struggle a lot with this issue, and here's what works for us. If you use the conda-forge channel, it's important to make sure you are using updated packages from conda-forge, even in your Miniconda root environment.

So install Miniconda, and then do:

and your custom environment will show up in Jupyter as an available kernel, as long as ipykernel was listed for installation in your custom_env.yml file, like this example:

Just to prove it working with a bunch of custom environments, here's a screen grab from Windows: 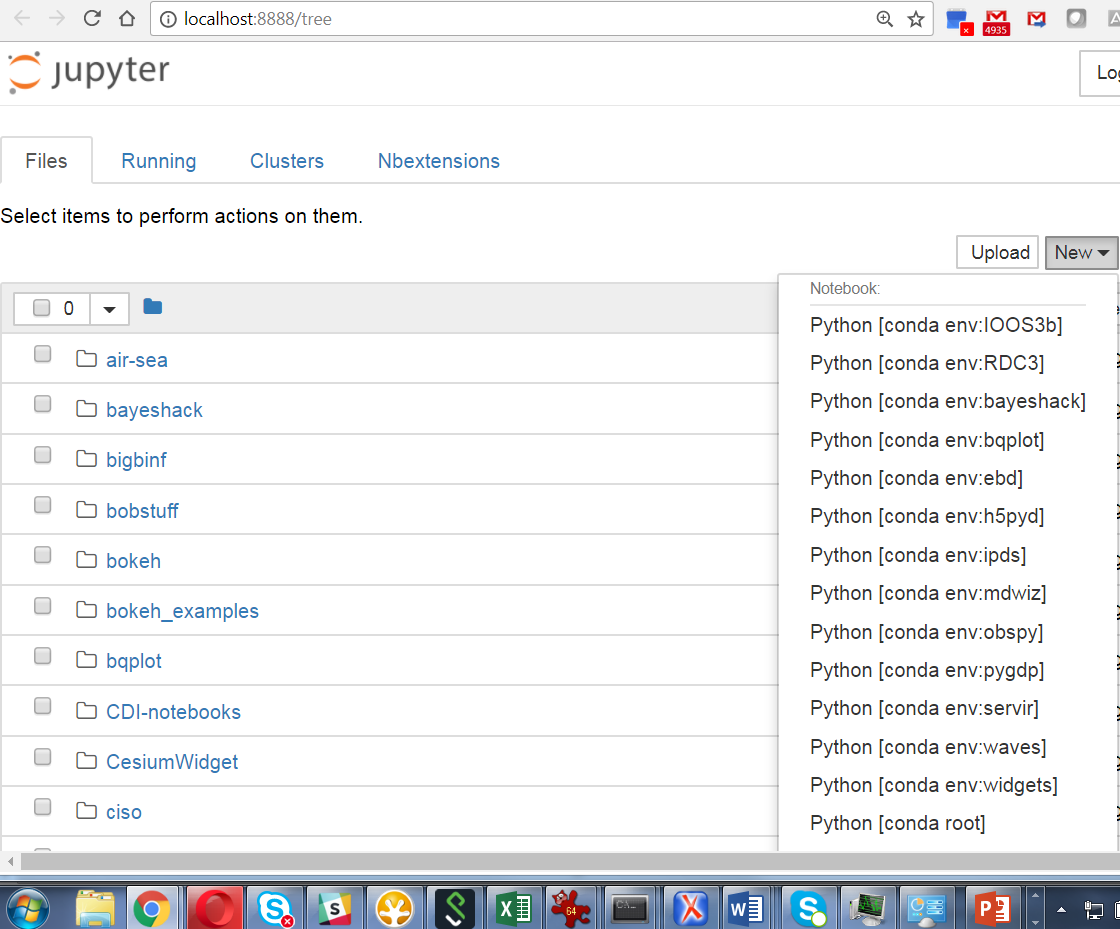 This is an old thread, but running this in Anaconda prompt, in my environment of interest, worked for me:

I ran into this same problem where my new conda environment, myenv, couldn't be selected as a kernel or a new notebook. And running jupter notebook from within the env gave the same result.

My solution, and what I learned about how Jupyter notebooks recognizes conda-envs and kernels:

Installing jupyter and ipython to myenv with conda:

After that, running jupter notebook outside any env listed myenv as a kernel along with my previous environments.

Running the notebook once I activated the environment:

hides all my other environment-kernels and only shows my language kernels:

This has been so frustrating, My problem was that within a newly constructed conda python36 environment, jupyter refused to load “seaborn” - even though seaborn was installed within that environment. It seemed to be able to import plenty of other files from the same environment — for example numpy and pandas but just not seaborn. I tried many of the fixes suggested here and on other threads without success. Until I realised that Jupyter was not running kernel python from within that environment but running the system python as kernel. Even though a decent looking kernel and kernel.json were already present in the environment. It was only after reading this part of the ipython documentation: https://ipython.readthedocs.io/en/latest/install/kernel_install.html#kernels-for-different-environments and using these commands:

I was able to get everything going nicely. (I didn’t actually use the —user variable).

One thing I have not yet figured is how to set the default python to be the "Python (other-env)" one. At present an existing .ipynb file opened from the Home screen will use the system python. I have to use the Kernel menu “Change kernel” to select the environment python.

I had similar issue and I found a solution that is working for Mac, Windows and Linux. It takes few key ingredients that are in the answer above:

To be able to see conda env in Jupyter notebook, you need:

The env you can see in your terminal:

On Jupyter Lab you can see the same env as above both the Notebook and Console: 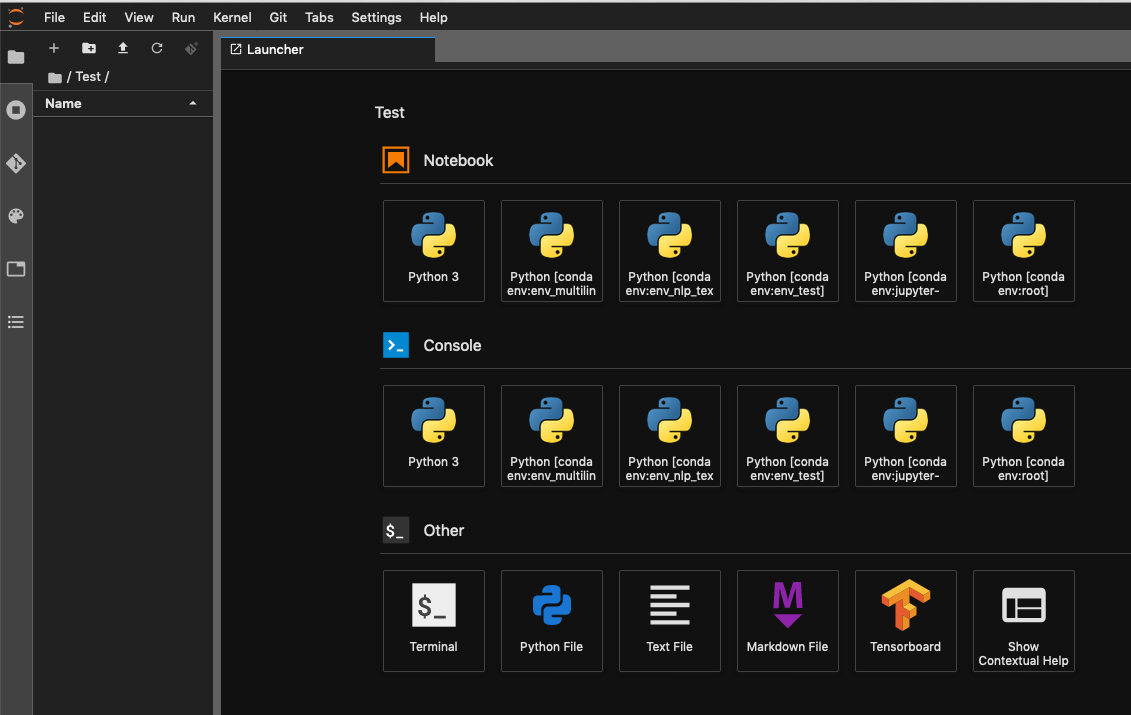 And you can choose your env when have a notebook open:

While @coolscitist's answer worked for me, there is also a way that does not clutter your kernel environment with the complete jupyter package+deps. It is described in the ipython docs and is (I suspect) only necessary if you run the notebook server in a non-base environment.

You can check if it works using

First you need to activate your environment .

Next you can add your virtual environment to Jupyter by typing:

Follow the instructions in the iPython documentation for adding different conda environments to the list of kernels to choose from in Jupyter Notebook. In summary, after installing ipykernel, you must activate each conda environment one by one in a terminal and run the command python -m ipykernel install --user --name myenv --display-name "Python (myenv)", where myenv is the environment (kernel) you want to add.

I had this issue (again) and it turned out I installed from the conda-forge channel; removing it and reinstalling from anaconda channel instead fixed it for me.

Update: I again had the same problem with a new env, this time I did install nb_conda_kernels from anaconda channel, but my jupyter_client was from the conda-forge channel. Uninstalling nb_conda_kernels and reinstalling updated that to a higher-priority channel.

So make sure you've installed from the correct channels :)

After reinstalling, executing jupyter notebook in the opennmt2 environment will execute the newly installed jupyter

I just wanted to add to the previous answers: in case installing nb_conda_kernels, ipywidgets and ipekernel dosen't work, make sure your version of Jupyter is up to date. My envs suddenly stopped showing up after a period of everything working fine, and it resumed working after I simply updated jupyter through the anaconda navigator.

from the terminal while having the environment active didn't do the job after I opened Jupyter from the same command line using conda jupyter notebook.

Environments in Anaconda Navigator to run Jupyter from the selected environment 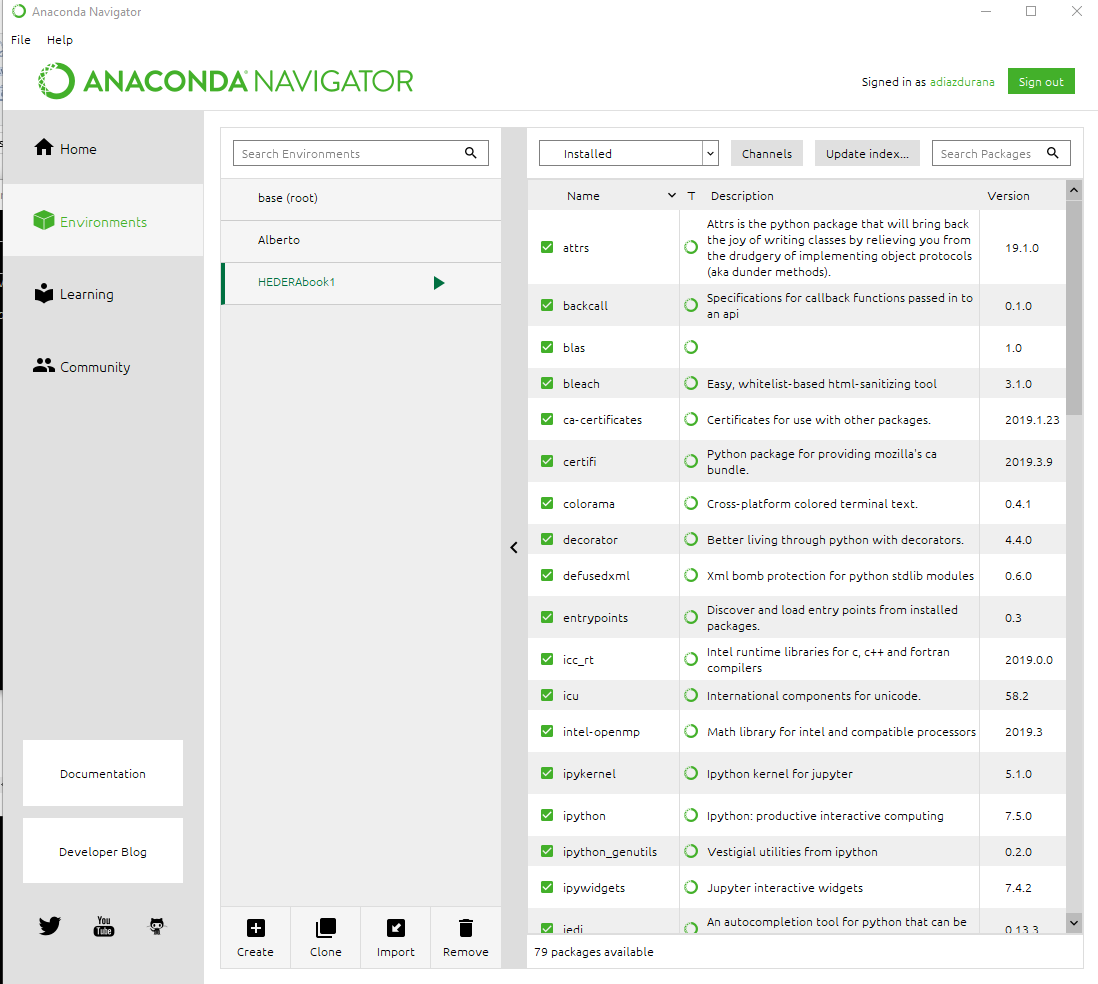 Not the answer you're looking for? Browse other questions tagged anaconda jupyter jupyter-notebook conda or ask your own question.