Gradle: How to Display Test Results in the Console in Real Time?

I would like to see test results ( system.out/err, log messages from components being tested ) as they run in the same console I run:

And not wait until tests are done to look at the test reports ( that are only generated when tests are completed, so I can't "tail -f" anything while tests are running )

Here is my fancy version:

You could run Gradle with INFO logging level on the command line. It'll show you the result of each test while they are running. Downside is that you will get far more output for other tasks also.

Disclaimer: I am the developer of the Gradle Test Logger Plugin.

You can simply use the Gradle Test Logger Plugin to print beautiful logs on the console. The plugin uses sensible defaults to satisfy most users with little or no configuration but also offers a number of themes and configuration options to suit everyone.

Make sure you always get the latest version from Gradle Central.

You don't need any configuration at all. However, the plugin offers a few options. This can be done as follows (default values shown):

I hope you will enjoy using it.

You can add a Groovy closure inside your build.gradle file that does the logging for you:

Since version 1.1 Gradle supports much more options to log test output. With those options at hand you can achieve a similar output with the following configuration:

adding the following code to your build.gradle (since version 1.1) works fine for output on passed, skipped and failed tests.

What I want to say additionally (I found out this is a problem for starters) is that the gradle test command executes the test only one time per change.

So if you are running it the second time there will be no output on test results. You can also see this in the building output: gradle then says UP-TO-DATE on tests. So its not executed a n-th time.

If you want to force the test cases to run, use gradle cleanTest test.

This is slightly off topic but I hope it will help some newbies.

As sparc_spread stated in the comments:

If you want to force gradle to always run fresh tests (which might not always be a good idea) you can add outputs.upToDateWhen {false} to testLogging { [...] }. Continue reading here.

Add this to build.gradle to stop gradle from swallowing stdout and stderr.

As a follow up to Shubham's great answer I like to suggest using enum values instead of strings. Please take a look at the documentation of the TestLogging class.

My favourite minimalistic version based on Shubham Chaudhary answer. 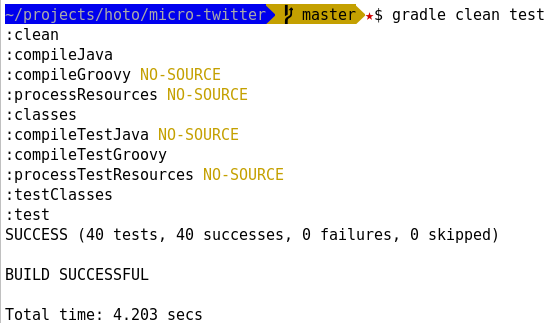 Put this in build.gradle file:

Then the output will be:

If you have a build.gradle.kts written in Kotlin DSL you can print test results with (I was developing a kotlin multi-platform project, with no "java" plugin applied):

Just add the following closure to your build.gradle. the output will be printed after the execution of every test.

For Android, this works nicely:

Following on from Benjamin Muschko's answer (19 March 2011), you can use the -i flag along with grep, to filter out 1000s of unwanted lines. Examples:

Strong filter - Only display each unit test name and test result and the overall build status. Setup errors or exceptions are not displayed.

Soft filter - Display each unit test name and test result, as well as setup errors/exceptions. But it will also include some irrelevant info:

Explanation of how it works:

The first command is ./gradlew test -i and "-i" means "Info/Verbose" mode, which prints the result of each test in real-time, but also displays large amounts of unwanted debug lines.

In the strong filter, a unit test name and test result is allowed to display using " > ", and the overall status is allowed with "BUILD".

In the soft filter, the "-v" flag means "not containing" and "^" means "start of line". So it strips out all lines that start with "Executing " or start with "Creating ", etc.

For those using Kotlin DSL, you can do:

If you are using jupiter and none of the answers work, consider verifying it is setup correctly:

And then try the accepted answers

I've written a test logger for Kotlin DSL. You can put this block on your project scope build.gradle.kts file.

A more comprehensive response for those using th Kotlin DSL:

This should produce an output close to @odemolliens answers.

Not the answer you're looking for? Browse other questions tagged testing console gradle or ask your own question.

1
gradle compiles but does not run tests
255
Grep regex NOT containing string
27
Gradle: How to display androidTest results in the console?
8
Gradle Android: How to Display test results without using --info
5
Gradle DSL method not found: test()
2
How can I share build code script for all my gradle projects (not just subprojects)
3
Cannot resolve symbol testLogging, events, exceptionFormat- Gradle
2
How to print Kotlin tests output to console instead of html report?
1
How can I show a running test total in the console output?
0
RSpec-like output in Grails test-app command
See more linked questions

1087
How can I get the application's path in a .NET console application?
142
Having the output of a console application in Visual Studio instead of the console
847
How to change node.js's console font color?
906
How can I force gradle to redownload dependencies?
555
How to run only one unit test class using Gradle
27
Gradle: How to display androidTest results in the console?
1227
What's the difference between implementation, api and compile in Gradle?