Enabling CORS on IIS for only Font files

Is there a way to enable CORS for only files of a certain type on IIS7? I am going off this article (https://www.maxcdn.com/one/tutorial/how-to-use-cdn-with-webfonts/) and noticed that the Apache and nginx examples show that CORS is only enabled if the request is looking for a certain Content-Type, whereas the IIS example shows CORS enabled for everything.

I have CSS that is being referenced on an external site but the font files are being blocked by the browser and wish to enable CORS on IIS7 but only for .woff, .woff2, .tff, .eot, and .svg files. I do not wish to enable CORS for everything if possible.

Hackerman's answer is great and it led me to a solution, however, there are a few adjustments that I had to make. The first was placing the rule in the outboundRules section under the rewrite node.

Lastly, the regex was updated to prevent requests such as the one below, which would allow someone to request any URL across origins:

... but it still allows the following

You should add this code to your Web.config:

You can install the IIS rewrite Module https://www.microsoft.com/en-us/download/details.aspx?id=7435 . After installing the module, restart your IIS Manager and click on your website under the “Sites” node. If you see the URL Rewrite Module symbol (shown below) in the window on the right under IIS section, then you are ready to go: 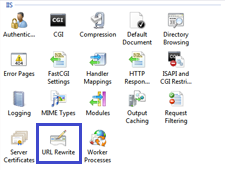 Then on your Web.config, you need to add the following rule:

534
How to add multiple font files for the same font?
483
Login failed for user 'IIS APPPOOL\ASP.NET v4.0'
978
"Cross origin requests are only supported for HTTP." error when loading a local file
0
Font-face not working from CDN - CORS already set
10
Google Font API uses browser detection. How to get all font variations for font-face
73
Are eot, ttf, and svg still necessary in the font-face declaration?
1
Laravel : add Cors header for static files
1
multiple files for multiple font-weight with @font-face
3
Which Fontfile to use in a website?