Why did my Git repo enter a detached HEAD state?

I ended up with a detached head today, the same problem as described in: git push says everything up-to-date even though I have local changes

As far as I know I didn't do anything out of the ordinary, just commits and pushes from my local repo.

So how did I end up with a detached HEAD?

See committing with a detached HEAD

When HEAD is detached, commits work like normal, except no named branch gets updated. (You can think of this as an anonymous branch.) 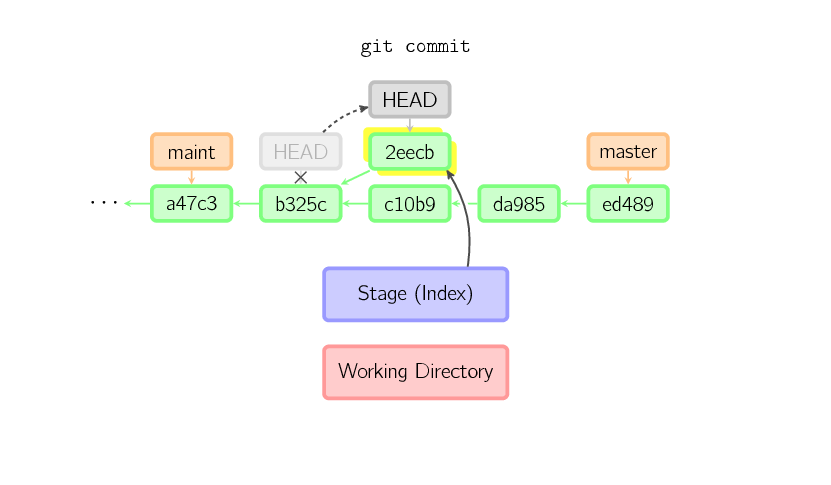 For example, if you checkout a "remote branch" without tracking it first, you can end up with a detached HEAD.

Meaning: git checkout origin/main (or origin/master in the old days) would result in:

That is why you should not use git checkout anymore, but the new git switch command.

With git switch, the same attempt to "checkout" (switch to) a remote branch would fail immediately:

To add more on git switch:

With Git 2.23 (August 2019), you don't have to use the confusing git checkout command anymore.

git switch can also checkout a branch, and get a detach HEAD, except:

To check out commit HEAD~3 for temporary inspection or experiment without creating a new branch:

If you wanted to create a new local branch tracking a remote branch:

If <branch> is not found but there does exist a tracking branch in exactly one remote (call it <remote>) with a matching name, treat as equivalent to

And if you git switch <tag> instead of git switch --detach <tag>, Git 2.36 will help you to remember the missing --detach option.

I reproduced this just now by accident:

Do not include origin/ at the front of my branch spec when checking it out:

Add -b parameter which creates a local branch from the remote

git checkout -b origin/Feature/f1234 or

this gives you a history of how your HEAD and branch pointers where moved in the past.

the top of this list is one reasone one might encounter a DETACHED HEAD state ... checking out a remote tracking branch.

Detached HEAD means that what's currently checked out is not a local branch.

Some scenarios that will result in a Detached HEAD state:

It can happen if you have a tag named same as a branch.

produces detached HEAD at "release/0.1". If you expect release/0.1 to be a branch name, then you get confused.

If git was to rename detached HEAD I would have it named as a HEAD that isn’t identified by a branch and will soon be forgotten.

We as people can easily remember branch names. We do git checkout new-button-feature / git checkout main. main and new-button-feature are easy to remember. And we can just do git branch and get a list of all branches. But to do the same with just commits you'd have to do git reflog which is very tedious. Because you have thousands of commits but only very few branches.

You are in 'detached HEAD' state.

Then if you made some changes and made a commit, you're still NOT on a branch.

Do you think you'd remember the commit SHA? You won't!

git doesn't want this to happen. Hence it's informing your HEAD is not associated to a branch so you're more inclined to checkout a new branch. As a result below that message it also says:

If you want to create a new branch to retain commits you create, you may do so (now or later) by using -b with the checkout command again. Example:

To go a bit deeper a branch is built in a way that it's smart. It will update its HEAD as you make commits. Tags on the other hand are not meant to be like that. If you checkout a tag, then you're again on a detached HEAD. The main reason is that if you make a new commit from that tag then given that that commit is not referenced by anything (not any branch or tag) then still its considered a detached HEAD.

Attached HEADs can only happen when you're on a branch.

Attached HEAD means that it is attached to some branch (i.e. it points to a branch).

Detached HEAD means that it is not attached to any branch, i.e. it points directly to some commit.

To look at from another angle, if you're on a branch and do cat .git/HEAD you'd get:

Then if you do cat refs/heads/Your-current-branch-name then you'd also see the SHA of the commit that your branch is pointing/referencing to.

However if you were on a detached HEAD you and cat .git/HEAD you'd just get the SHA of the commit and nothing more:

All of the following will cause detached head:

You're only on an attached head, if you've checked out a local branch

Special thanks to Josh Caswell & Saagar Jha in helping me figure this out.

It can easily happen if you try to undo changes you've made by re-checking-out files and not quite getting the syntax right.

You can look at the output of git log - you could paste the tail of the log here since the last successful commit, and we could all see what you did. Or you could paste-bin it and ask nicely in #git on freenode IRC.

A simple accidental way is to do a git checkout head as a typo of HEAD.

The other way to get in a git detached head state is to try to commit to a remote branch. Something like:

Note that if you do this, any further attempt to checkout origin/foo will drop you back into a detached head state!

The solution is to create your own local foo branch that tracks origin/foo, then optionally push.

This probably has nothing to do with your original problem, but this page is high on the google hits for "git detached head" and this scenario is severely under-documented.

When you checkout to a commit git checkout <commit-hash> or to a remote branch your HEAD will get detached and try to create a new commit on it.

Commits that are not reachable by any branch or tag will be garbage collected and removed from the repository after 30 days.

Another way to solve this is by creating a new branch for the newly created commit and checkout to it. git checkout -b <branch-name> <commit-hash>

This article illustrates how you can get to detached HEAD state.

HEAD is a pointer to the currently checked out branch or commit, it answers the question: Where am I right now in the repository? HEAD can be in either of two states, attached (default) or detached, depending on if you've checked out a local branch or not.

OP: How did I end up with a detached HEAD?

Ending up in detached HEAD state can be due to various reasons, below are 5 common cases (perhaps did you do any of the following):

In detached state experimental changes can be made without impacting any existing branch. See infographic below illustrating the difference between committing in attached vs detached state. 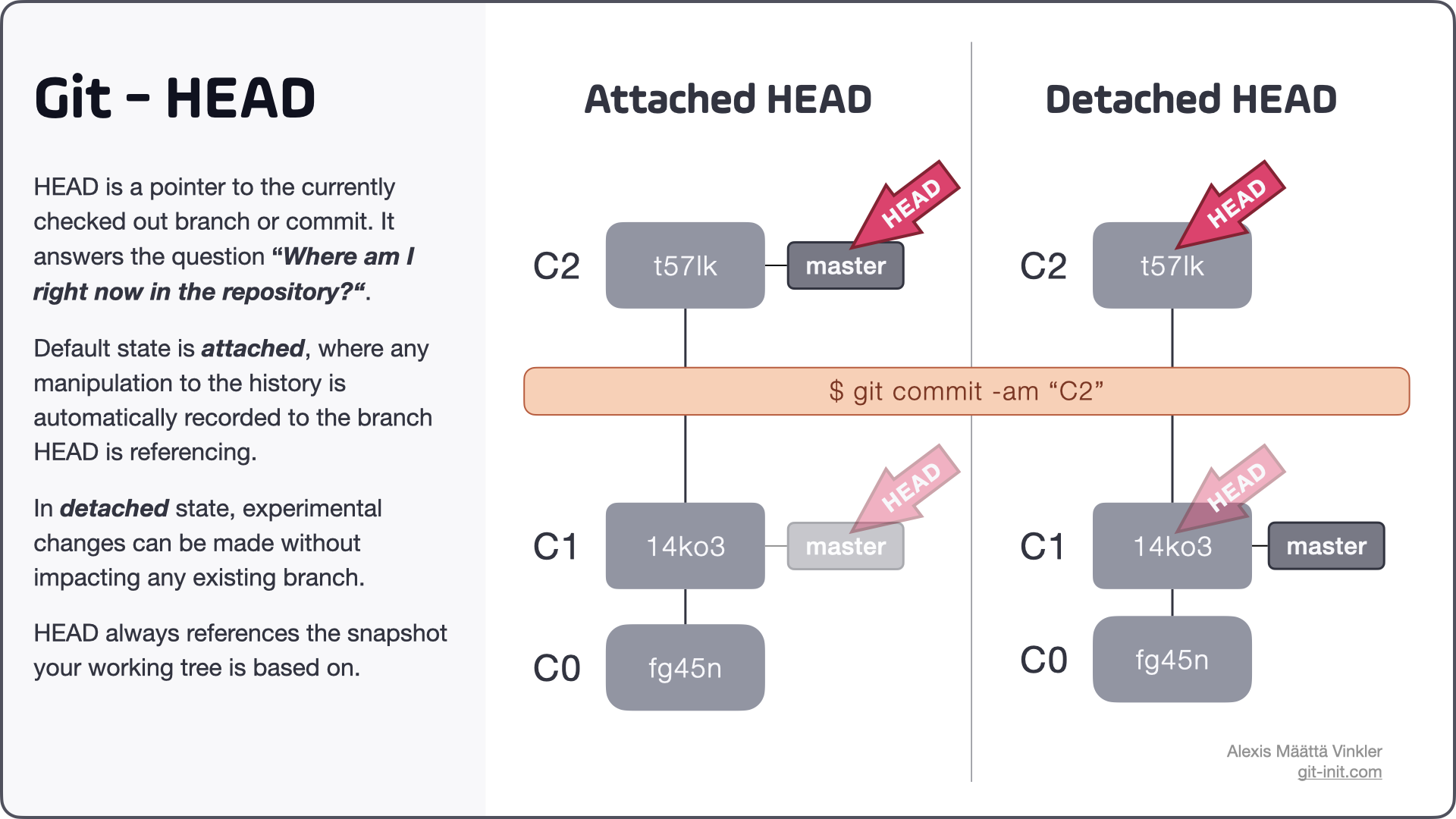 A common misconception is that the message You are in 'detached HEAD' state is of erroneous tone, when in fact it just describes how HEAD is referencing the current snapshot.

Moving from detached to attached state

To move from detached to attached state, you can either create a new branch from where you're at, or switch back to an existing branch.

Note: any commits created in detached state will eventually (post garbage collection) be discarded if you switch to another existing branch, without first persisting your changes in a new branch.

Source: Above excerpt is taken from this full length post on the subject: What is HEAD in Git?

Following VonC's comment, here is the short version of how I resolved this same 'detached HEAD' issue.

For others who may be looking into a way of getting the branch name but are getting HEAD instead, here is what I came up with:

For my case it happens this way:

For fixing I just need another checkout

37
Understanding detached HEAD in git
1
Can't switch from detached HEAD when trying a hard reset?
1
Can i commit to the origin/master branch locally?
0
downloaded a repo instead of cloning it from gitlab and fixed bugs,now want to push
13516
What is the difference between 'git pull' and 'git fetch'?
1974
How do I fix a Git detached head?
1728
How can I reconcile detached HEAD with master/origin?
1454
How do you rename a Git tag?
1037
How can I specify a branch/tag when adding a Git submodule?
966
How to permanently remove few commits from remote branch
See more linked questions

2484
How do I revert all local changes in Git managed project to previous state?
983
How do I clone a single branch in Git?
1261
What is HEAD in Git?
2163
Throw away local commits in Git
1728
How can I reconcile detached HEAD with master/origin?
384
What to do with commit made in a detached head
856
Make the current commit the only (initial) commit in a Git repository?
1974
How do I fix a Git detached head?
443
Can't push to GitHub because of large file which I already deleted
894
There is no tracking information for the current branch