When I attempt to visit http://mysubdomain.localhost chrome resolves to [::1]80, even if there is an explicit entry for this domain in the hosts file. No other browser behaves this way. Firefox, safari, and curl all resolve the IP address given in my hosts file. This is the entirety of my hosts file at the moment: 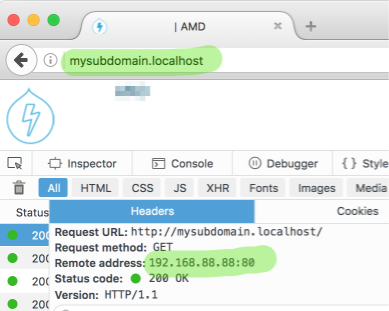 Chrome (not working as desired) 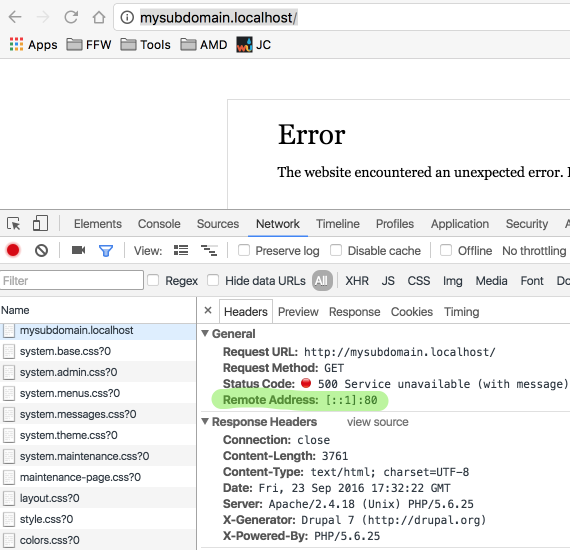 Upon further review, I think this is unfortunately working as designed. From the chromium issue queue:

The security risk is not about properly configured server vs improperly configured server. It's that a DNS resolver should never send foo.localhost requests out to the network. If it does, a network attacker could make "foo.localhost" point to any IP of their choosing. This is bad, because "localhost" (and "*.localhost") have special privileges (c.f. http://www.w3.org/TR/powerful-features/#is-origin-trustworthy ), and because they have those special privileges, they need to be secure.

In fact, it seems that chrome may be the only tool in the bunch properly implementing RFC-6761 which states in part:

So it seems there is no way to fix this. I will change the domain of my virtual machine to http://mysubdomain.local

After playing around with this and using firefox for a while, I found a workaround by accident. Instead of changing your development environments you can simply install https://www.telerik.com/download/fiddler.

Fiddler bypasses the DNS of chrome, I believe, so you are left with a perfectly working system without having to change all your environments.

I have tested this on Windows 10 with Hyper-v over vagrant.

Not the answer you're looking for? Browse other questions tagged google-chrome curl dns hosts or ask your own question.