I am using the following Go connection code:

I am using this Go MySQL driver: https://github.com/go-sql-driver/mysql

The documentation for this driver mentions the following connection string for connecting to a Google Cloud SQL server via Google App Engine: user@cloudsql(project-id:instance-name)/dbname

I am using projectid:regionname:instancename rather than projectid:instancename because this post mentions the need to include the regionname: google app engine golang, driver: bad connection

I have tried both variants of the connection string.

I made the following query in my mysql console to verify that the user 'root'@'localhost' indeed has a null password: select User, Host, HEX(authentication_string) from mysql.user. The 'root'@'%' user still has the password I specified in the Google Cloud SQL instance console.

I also created a new user and tried to connect to the instance with the new user's username in the connection string. This didn't fix the error.

I also tried adding a firewall rule, but this didn't fix the problem either: 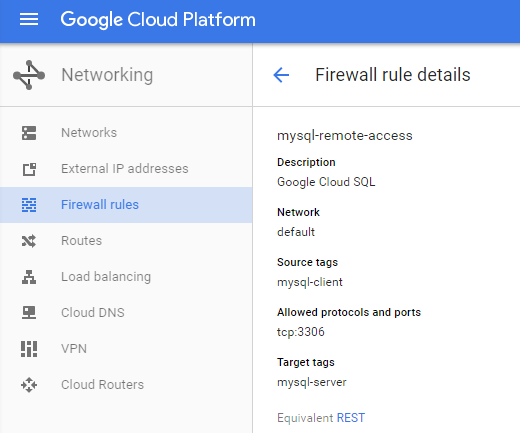 Finally, I went to the Compute Engine section of the Google Cloud Console and SSHed into the VM which is serving the latest instance of my app. I successfully pinged the Cloud SQL server's IP, but telnet xxx.xxx.xxx.xxx 3306 timed out. I also ran lsof -i TCP:3306 and lsof -i | grep 3306 but no processes appeared. I also installed mysql on this box and tried to connect to the server from there, but the connection failed.

Does anyone know what might be causing this issue?

It looks like there could be an issue with the Go MySQL driver when a deployed Google App Engine application tries to connect to a second generation Google Cloud SQL Server.

I created a first generation Cloud SQL instance and I was able to successfully connect to the server using a deployed Google App Engine application with this connection string:

No region name was required.

Google's posted documentation was (and perhaps still is) wrong, but the correct solution is posted there. We're using 2nd generation Cloud SQL in production without issue.

Not the answer you're looking for? Browse other questions tagged google-app-engine go google-cloud-sql or ask your own question.