I've been bashing my head against this brick wall for what seems like an eternity, and I just can't seem to wrap my head around it. I'm trying to implement an autoencoder using only numpy and matrix multiplication. No theano or keras tricks allowed.

I'll describe the problem and all its details. It is a bit complex at first since there are a lot of variables, but it really is quite straightforward.

1) X is an m by n matrix which is our inputs. The inputs are rows of this matrix. Each input is an n dimensional row vector, and we have m of them.

2)The number of neurons in our (single) hidden layer, which is k.

3) The activation function of our neurons (sigmoid, will be denoted as g(x)) and its derivative g'(x)

What we don't know and want to find

They are initallized randomly and we find the best solution using gradient descent. 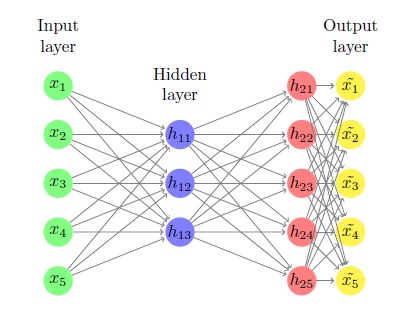 Finally, we take this output and perform some linear operator on it: Xhat = h2w3+b3 which is also m by n and is our final result.

Where I am stuck

The cost function I want to minimize is the mean squared error. I already implemented it in numpy code

The problem is finding the derivatives of cost with respect to w1,b1,w2,b2,w3,b3. Let's call the cost S.

After deriving myself and checking myself numerically, I have established the following facts:

But I can't for the life of me figure out dSdz2. It's a brick wall.

What is the formula to compute the derivative of S with respect to z2?

Edit - This is my code for the entire feed forward operation of the autoencoder.

@Paul is right that the bias terms should be vectors, not matrices. You should have:

Numpy's broadcasting means that you don't have to change your calculation of xhat.

Then (I think!) you can compute the derivatives like this:

Does this work for you?

I've decided that I'm not at all sure that gGradient is supposed to be a matrix. How about:

Not the answer you're looking for? Browse other questions tagged python algorithm numpy matrix derivative or ask your own question.