Microsoft.WebApplication.targets was not found, on the build server. What's your solution?

Trying to build my project on the build server gives me the following error:

I solved this problem a few months ago, with installing Visual Studio 2010 on the Build Server. But now I'm setup a new server from scratch, and I want to know if there any better solution to solve this issue.

Remove x86 according to how your build breaks. If you have other project types you will probably need to copy the entire msbuild folder.

Building and publishing WAPs is not supported if VS is not installed. With that said, if you really do not want to install VS then you will need to copy all the files under %ProgramFiles32%\MSBuild\Microsoft\.

You will need to install the Web Deploy Tool as well. I think that is it.

Right now, in 2017, you can install WebApplication redists with MSBuildTools. Just go to this page that will download MSBuild 2017 Tools and while installation click Web development build tools to get these targets installed as well: 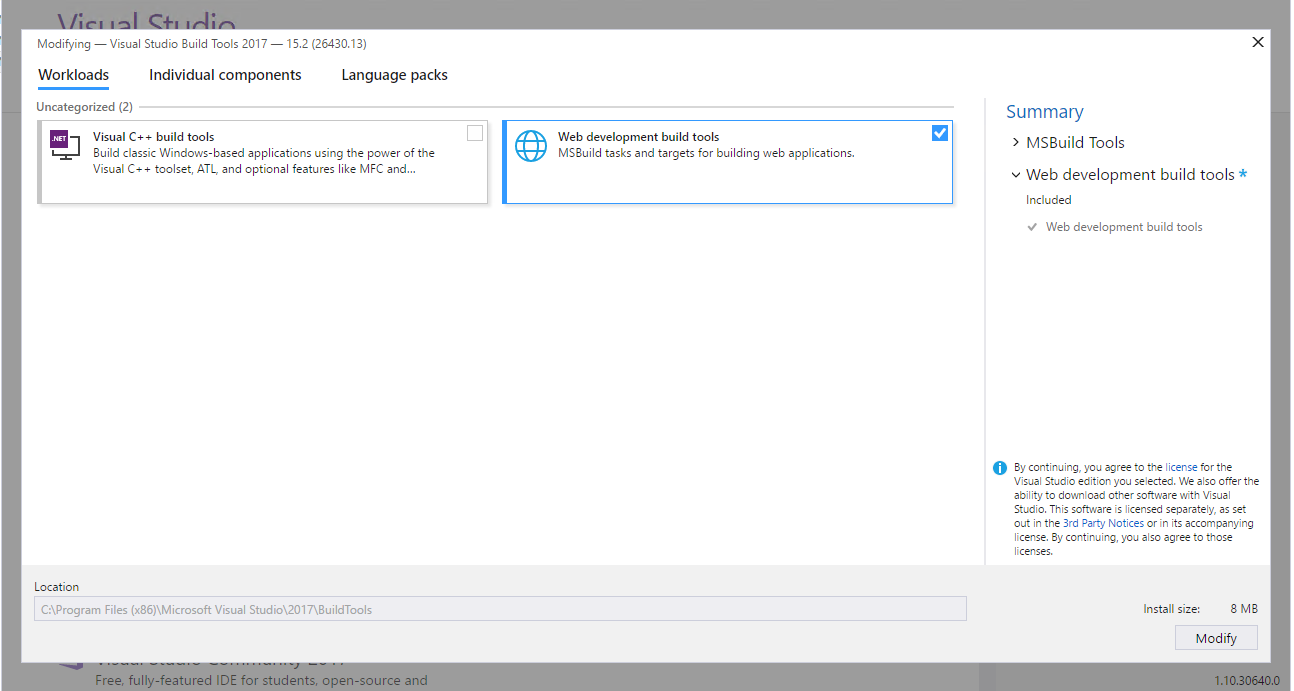 This will lead to installing missing libraries in C:\Program Files (x86)\Microsoft Visual Studio\2017\BuildTools\MSBuild\Microsoft\VisualStudio\v15.0\WebApplications by default

UPD: as of VS2017, there is workload in Build Tools that eliminates this problem completely. See @SOReader answer.

If you'd prefer not to modify anything on build server, and you still want the project to build right out of source control, it might be a good idea to put the required binaries under source control. You'll need to modify the imports section in your project file to look like this:

The first line is the actual import from the new location that is relative to the solution directory. The second one is a turned-off version (Condition="false") of the original line that allows for Visual Studio to still consider your project to be a valid Web Application Project (that's the trick that VS 2010 SP1 does itself).

Don't forget to copy the C:\Program Files (x86)\Microsoft\VisualStudio\v10.0\WebApplications to BuildTargets folder under your source control.

You can also use the NuGet package MSBuild.Microsoft.VisualStudio.Web.targets, referencing them within your Visual Studio project(s), then change your references as Andriy K suggests.

Based on this post here you can simply download the Microsoft Visual Studio 2010 Shell (Integrated) Redistributable Package and the targets are installed.

This avoids the need to install Visual Studio on the build server.

I have just tried this out now, and can verify that it works:

error MSB4019: The imported project "C:\Program Files (x86)\MSBuild\Microsoft\VisualStudio\v10.0\WebApplications\Microsoft.WebApplication.targets" was not found. Confirm that the path in the declaration is correct, and that the file exists on disk.

This is a far better solution than installing Visual Studio on a build server, obviously.

When building on the build/CI server, turn off the import of Microsoft.WebApplication.targets altogether by specifying /p:VSToolsPath=''. This will, essentially, make the condition of the following line false:

This is how it's done in TeamCity: 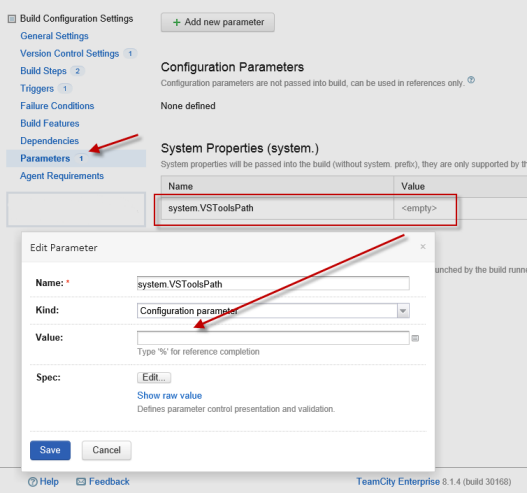 Goal: no changes / installs necessary to the build agents

I have taken a hybrid approach to the NuGet approach by Lloyd here, which was based off of the committing binary dependencies solution by Andrik.

The reason why is I want to be able to add new build agents without having to pre-configure them with items such as this.

In Version 7, I did the following. This may not have been necessary, and based on the comments is definitely not needed now. Please see the comments below.

If you migrate Visual Studio 2012 to 2013, then open *.csproj project file with edior.
and check 'Project' tag's ToolsVersion element.

Or If you build with msbuild then just specify VisualStudioVersion property

It seems the new version of msbuild does not ship with Microsoft.WebApplication.targets. To fix you need to update your csproj file as so:

1) Edit the web app csproj (right click). Find the section in the csproj towards the bottom concerning build tools. It should look like so.

This is all you need. Only 103MB. Don't install everything 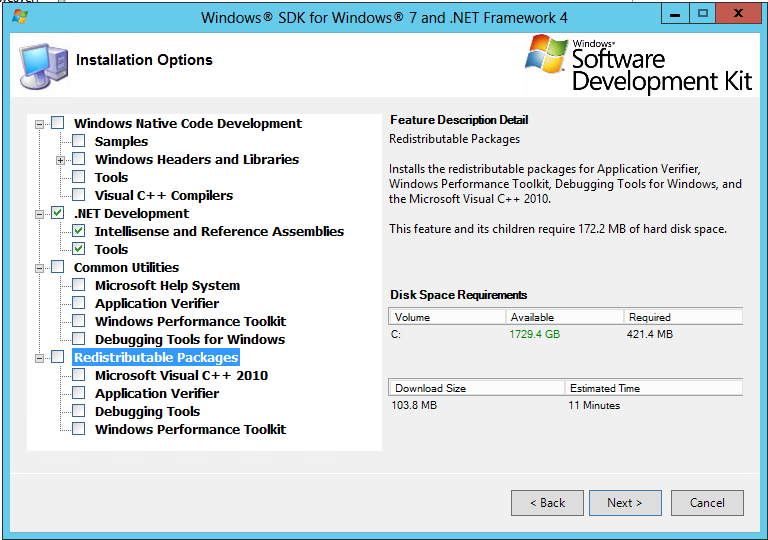 I have found this on MS connect:

Yes, you need to install Visual Studio 2010 on your build machine to build database projects. Doing so does not require an additional license of Visual Studio.

So, this is the only option that I have for now.

My solution is a mix of several answers here.

I checked the build server, and Windows7/NET4.0 SDK was already installed, so I did find the path:

However, on this line:

$(MSBuildExtensionsPath) expands to C:\Program Files\MSBuild which does not have the path.

Therefore what I did was to create a symlink, using this command:

This way the $(MSBuildExtensionsPath) expands to a valid path, and no changes are needed in the app itself, only in the build server (perhaps one could create the symlink every build, to make sure this step is not lost and is "documented").

It basically entails calling MSBuild from the MSBuild directory, instead of the Visual Studio directory.

I also added the MSBuild directory to my path, to make the scripts easier to code.

Anyone coming here for Visual Studio 2017. I had the similar issue and couldn't compile the project after update to 15.6.1. I had to install MSBulild tools but still the error was there.

I was able to fix the issue by copying the v14.0 folder from C:\Program Files (x86)\MSBuild\Microsoft\VisualStudio to the same folder as v15.0 and that resolved all the errors. So now my folder structure looks like below, where both folders contain the same content.

If you are using MSBuild, as in the case of a build server, what worked for me is:

In case if you're trying to deploy a project using VSTS, then issue might be connected with checking "Hosted Windows Container" option instead of "Hosted VS2017"(or 18, etc.): 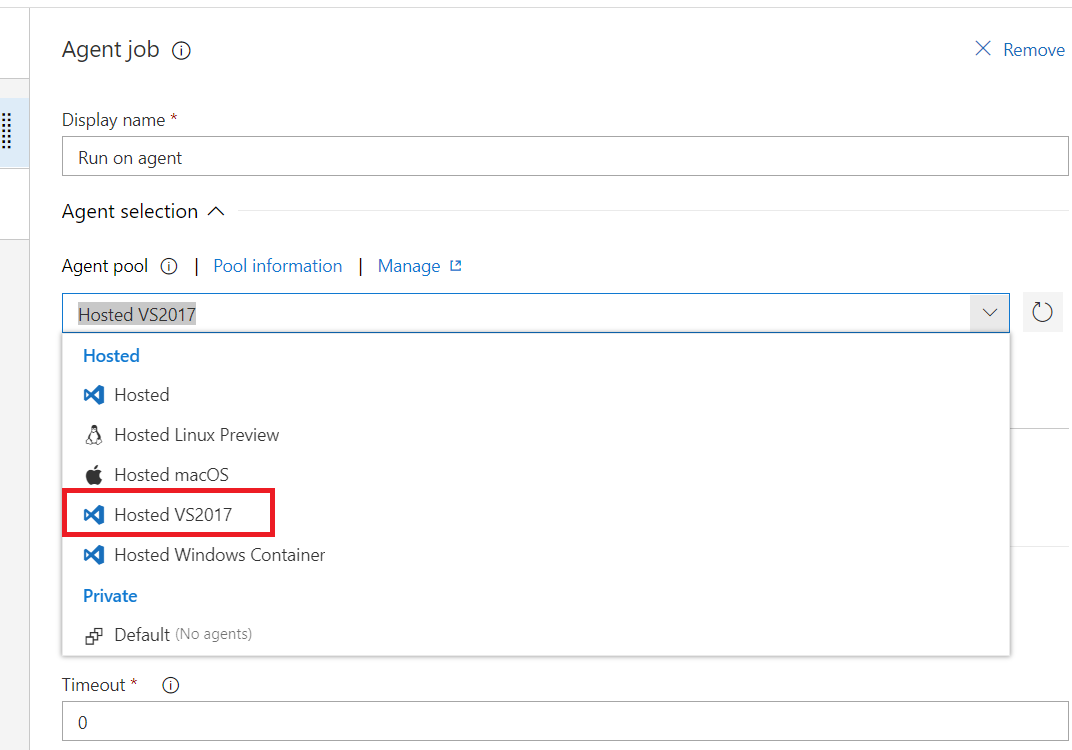 I was having this issue building a SQL Server project on a CI/CD pipeline. In fact, I was having it locally as well, and I did not manage to solve it.

What worked for me was using an MSBuild SDK, capable of producing a SQL Server Data-Tier Application package (.dacpac) from a set of SQL scripts, which implies creating a new project. But I wanted to keep the SQL Server project, so that I could link it to the live database through SQL Server Object Explorer on Visual Studio. I took the following steps to have this up and running:

PS: The files have to be physically in the SDK project, either in the root or on some folder, so links to the .sdk files in the SQL Server project won't work. In theory, it should be possible to copy these files with a pre-build condition, but for some obscure reason, this was not working for me. I tried also to have the .sql files on the SDK project and link them to the SQL Server project, but that would easily break the link with the SQL Server Object Explorer, so I decided to drop this as well.

Not the answer you're looking for? Browse other questions tagged msbuild .net-4.0 build-server targets dbproj or ask your own question.