I've been using Linux perf for some time to do application profiling. Usually the profiled application is fairly complex, so one tends to simply take the reported counter values at face value, as long as there isn't any gross discrepancy with what you might expect based on first principles.

Recently, however, I have profiled some trivial 64-bit assembly programs - triival enough that one can calculate almost exactly the expected value of various counters, and it seems that perf stat is overcounting.

Take the following loop for example:

This will simply loop n times, where n is the initial value of rax. Each iteration of the loop executes 4 instructions, so you would expect 4 * n instructions executed, plus some small fixed overhead for process startup and termination and the small bit of code that sets n before entering the loop.

OK, so you might guess that these few hundred thousand extra instructions are just fixed application setup and teardown costs (the userland setup is very small, but there might be hidden stuff). Let's try for n=10 billion then:

Now there are ~4.9 million extra instructions, about a 10x increase from before, proportional to the 10x increase in the loop count.

You can try various counters - all the CPU related ones show similar proportional increases. Let's focus then on instruction count to keep things simple. Using the :u and :k suffixes to measure user and kernel counts, respectively, shows that counts incurred in the kernel account for almost all of the extra events:

OK, but where does that leave us? This is a trivial CPU-bound loop. It does not make any system calls, and it does not access memory (which may indirectly invoke the kernel though the page fault mechanism). Why is the kernel executing instructions on behalf of my application?

It doesn't seem to be caused by context switches or CPU migrations, since these are at or close to zero, and in any case the extra instruction count doesn't correlate to runs where more of those events occurred. 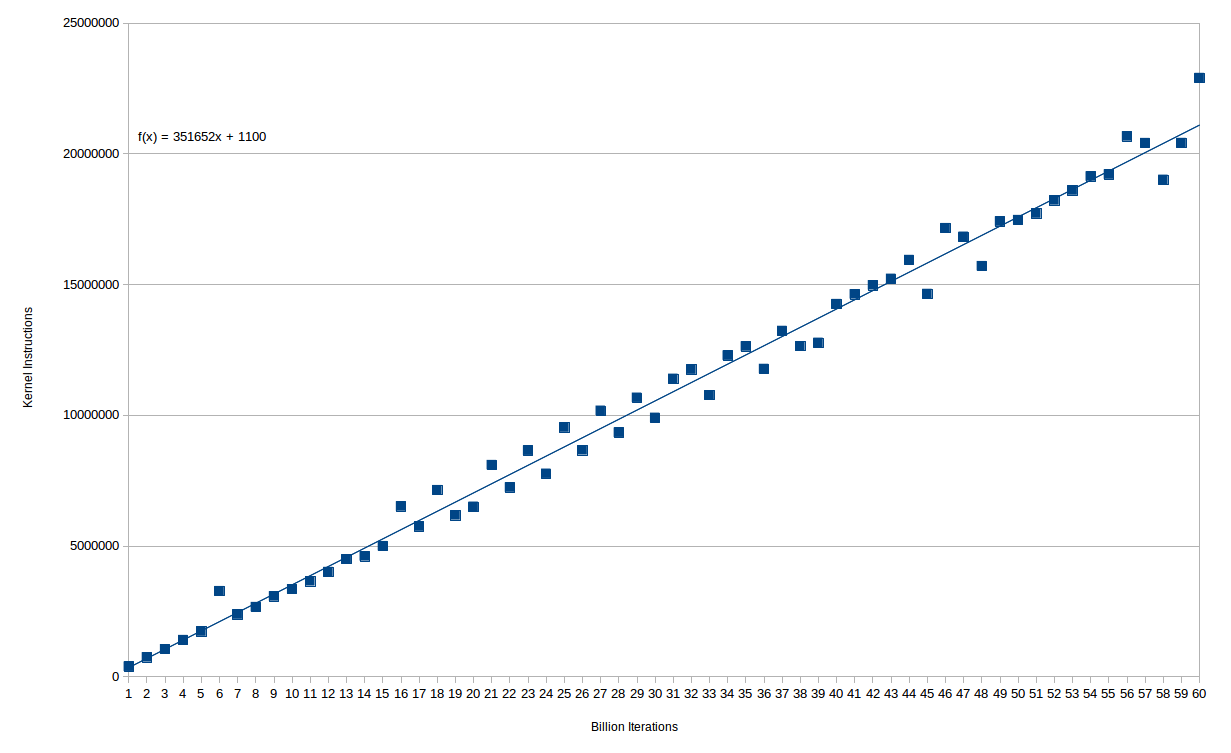 You can see that the relationship is pretty much perfectly linear - in fact up until 15e9 iterations there is only one outlier. After that, there seem to be two separate lines, suggesting some kind of quantization of whatever it is that causes the excess time. In any case, you incur about 350K kernel instructions for every 1e9 instructions executed in the main loop.

What's up with this mysterious work happening in the kernel?

1 Here I'm using the terms "time" and "cycles" more or less interchangeably here. The CPU runs flat out during these tests, so modulo some turbo-boost related thermal effects, cycles are directly proportional to time.

The answer is quite simple. Your counters are set to count in both user and OS mode, and your measurements are disturbed at periodic intervals by Linux's time-slicing scheduler, which ticks several times per second.

Fortuitously for you, while investigating an unrelated issue with @PeterCordes 5 days ago, I published a cleaned-up version of my own performance counter access software ,libpfc.

libpfc is a very low-level library and Linux Loadable Kernel Module that I coded myself using only the complete Intel Software Developers' Manual as reference. The performance counting facility is documented in Volume 3, Chapter 18-19 of the SDM. It is configured by writing specific values to specific MSRs (Model-Specific Registers) present in certain x86 processors.

There are two types of counters that can be configured on my Intel Haswell processor:

To configure the counters, I took upon the burden of programming every MSR myself in my LKM, pfc.ko, whose source code is included in my repository.

Programming MSRs must be done extremely carefully, else the processor will punish you with a kernel panic. For this reason I familiarized myself with every single bit of 5 different types of MSRs, in addition to the general-purpose and fixed-function counters themselves. My notes on these registers are at pfckmod.c:750, and are reproduced here:

In the MSR IA32_PERFEVTSELx, if the OS bit is cleared while the User bit is set, the counter will only accumulate events while in user mode, and will exclude kernel-mode events. In the MSR IA32_FIXED_CTRL_CTRL, each group of 4 bits contains a two-bit enable field, which if set to 2 (0b10) will enable counting events in user mode but not in kernel-mode.

My LKM enforces user-mode-only counting for both fixed-function and general-purpose counters at pfckmod.c:296 and pfckmod.c:330 respectively.

In user-space, the user configures the counters (example of the process, starting at pfcdemo.c:98), then sandwiches the code to be timed using the macros PFCSTART() and PFCEND(). These are very specific code sequences, but they have a cost, and thus produce a biased result that overcounts the number of events from the timers. Thus, you must also call pfcRemoveBias(), which times PFCSTART()/PFCEND() when they surround 0 instructions, and removes the bias from the accumulated count.

I took your code and put it into pfcdemo.c:130, such that it now read

. I got the following:

Not the answer you're looking for? Browse other questions tagged performance assembly linux-kernel x86 perf or ask your own question.

629
How do I achieve the theoretical maximum of 4 FLOPs per cycle?
83
C code loop performance [continued]
1
setitimer and signal count on Linux. Is signal count directly proportional to run time?
18
Analyzing cause of performance regression with different kernel version
1388
Replacing a 32-bit loop counter with 64-bit introduces crazy performance deviations with _mm_popcnt_u64 on Intel CPUs
1
Why is time servicing softirqs increased on kernel 4.1 in compare with kernel 3.4?
1
performance degrading with PTI=on in Linux-4.4.0
6
Why modifying an instruction cause huge i-cache and i-TLB misses on x86?
5
why cpu “insn per cycle” is different in similar cpu and How “MONITOR-MWAIT” work in Linux?