How to make a custom activation function with only Python in Tensorflow?

Suppose you need to make an activation function which is not possible using only pre-defined tensorflow building-blocks, what can you do?

So in Tensorflow it is possible to make your own activation function. But it is quite complicated, you have to write it in C++ and recompile the whole of tensorflow [1] [2].

Is there a simpler way?

Credit: It was hard to find the information and get it working but here is an example copying from the principles and code found here and here.

So let's take for example this function which we would want to use an activation function:

Which look as follows: 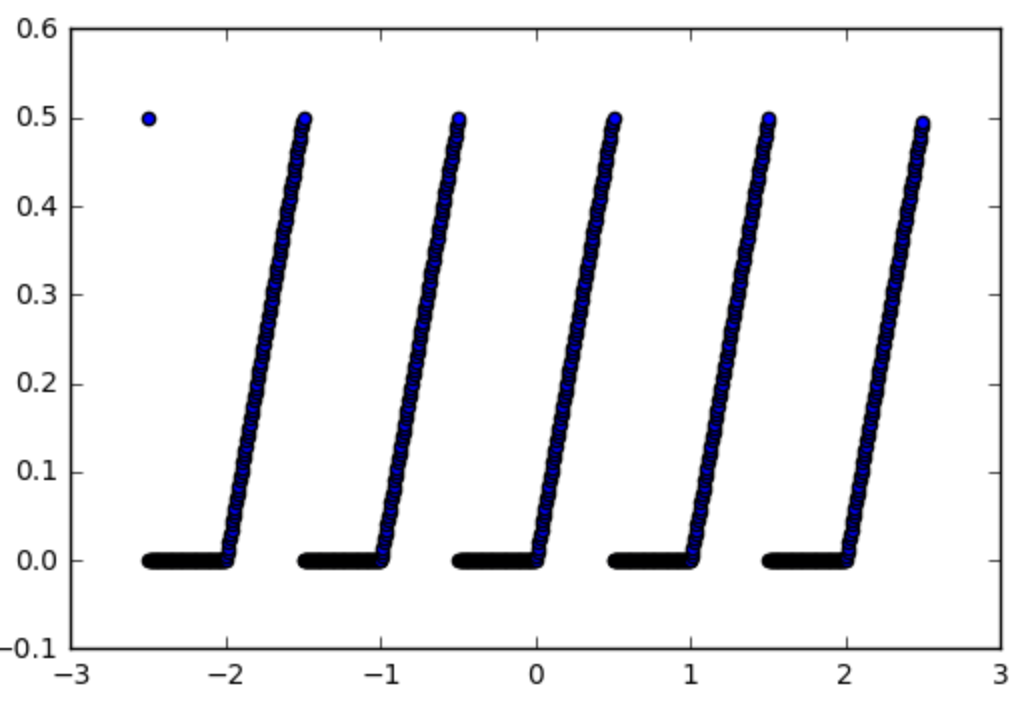 The first step is making it into a numpy function, this is easy:

Now we should write its derivative.

Now for the hard part of making a TensorFlow function out of it.

tf.py_func acts on lists of tensors (and returns a list of tensors), that is why we have [x] (and return y[0]). The stateful option is to tell tensorflow whether the function always gives the same output for the same input (stateful = False) in which case tensorflow can simply the tensorflow graph, this is our case and will probably be the case in most situations. One thing to be careful of at this point is that numpy used float64 but tensorflow uses float32 so you need to convert your function to use float32 before you can convert it to a tensorflow function otherwise tensorflow will complain. This is why we need to make np_d_spiky_32 first.

What about the Gradients? The problem with only doing the above is that even though we now have tf_d_spiky which is the tensorflow version of np_d_spiky, we couldn't use it as an activation function if we wanted to because tensorflow doesn't know how to calculate the gradients of that function.

Hack to get Gradients: As explained in the sources mentioned above, there is a hack to define gradients of a function using tf.RegisterGradient [doc] and tf.Graph.gradient_override_map [doc]. Copying the code from harpone we can modify the tf.py_func function to make it define the gradient at the same time:

Gradient Function: So for our spiky activation function that is how we would do it:

The activation function has only one input, that is why x = op.inputs[0]. If the operation had many inputs, we would need to return a tuple, one gradient for each input. For example if the operation was a-bthe gradient with respect to a is +1 and with respect to b is -1 so we would have return +1*grad,-1*grad. Notice that we need to return tensorflow functions of the input, that is why need tf_d_spiky, np_d_spiky would not have worked because it cannot act on tensorflow tensors. Alternatively we could have written the derivative using tensorflow functions:

And now we are done. And we can test it.

Why not simply use the functions that are already available in tensorflow to build your new function?

For the spiky function in your answer, this could look as follows

I would consider this substantially much easier (not even need to compute any gradients) and unless you want to do really exotic things, I can barely imagine that tensorflow does not provide the building blocks for building highly complex activation functions.

Not the answer you're looking for? Browse other questions tagged python tensorflow neural-network deep-learning activation-function or ask your own question.

3141
How do I copy a file in Python?
5011
How can I safely create a nested directory in Python?
3413
How to get the current time in Python
2976
How to make function decorators and chain them together?
4374
How to make a flat list out of a list of lists
3154
How do I concatenate two lists in Python?
2418
How to upgrade all Python packages with pip
2746
How to delete a file or folder in Python?