So Xcode 8 has been pretty buggy and seems to crash constantly when using the Sprite Kit scene editor and tile maps...

The error occurred while I had a scene open in the scene editor and was using tile maps.

Now I can't even open my project for more than 3 seconds without Xcode crashing... Kind of at a loss as to what to do...

I've tried uninstalling and reinstalling Xcode...but that did nothing.

Here's a pastebin of the crash report. Any help would be extremely appreciated.

Clearing the Xcode's derived data folder worked for me. you can find the derived data location in Xcode -> Preferences -> Locations tag.

I had a similar problem (unrelated to SceneKit though) — Xcode would just crash when opening a certain project. Deleted my UserInterfaceState.xcuserstate file from under the xcworkspace directory and that solved it.

I had this issue. Got it solved using Solution 2. 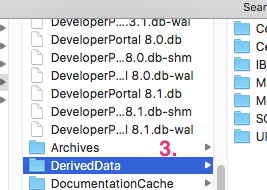 I believe the Git reset command was made for moments like this. So rather than pointing the finger at Xcode, it's better to have a workflow that acknowledges that things sometimes go wrong. Git reset would take you back to a known good state.

It seemed that a certain sks file was triggering the crash... So the trick to get it working again was to

a. rapidly click to get Xcode to show the project navigator

b. quickly hold ^⌘W , which closed the currently open scene editor that the project kept opening in and subsequently crashing.

c. delete and restore the previous version of the file from time machine.

Now it seems to work.

To avoid Tile Map related crashes ensure you save the tile set before attempting to use it.

As per this question here. Having issues with creating Tile Sets in Xcode 8. Anyone have any success?

On a tangent, blaming Xcode 8 is fair... Xcode 8 is very buggy in terms of Sprite Kit.

It struggles to let me use the new spritekit features in .SKS files created in versions previous to 8.

For instance the tile maps often don't seem to function in these older scenes unless I duplicate the SKS File and delete the old one, then try again. Not to mention Xcode crashes very often.

I'm always one to back up frequently... but it looks like I'm going to need to walk on eggshells with this release. Which is pretty awful.

Well the error is due to some empty array that is being indexed.

I get that is most unhelpful. But at least you know it is tile map editor related. This could very well be an Apple bug. But as Mark Brownsword mentioned above, if you have source control, you can go back to your prior version of the file that worked. Then diff with that version versus the current version. If you are not using source control, this unfortunately is an example of why source control is helpful.

Questions like you raise are difficult because you are not clear about actions that lead to this. This isn't to say you are doing something that isn't correct. But it is a difficult diagnosis when limited info is presented.

2
Having issues with creating Tile Sets in Xcode 8. Anyone have any success?