When to use Yarn over NPM? What are the differences?

What are the differences between Yarn and NPM? At the time of writing this question I can only find some articles on the Internet showing what's the Yarn equvalent of an NPM command like this.

Do they have the same functionalities (I know Yarn does local caching and looks like you only need to download a package once) but other than this is there any benefits for moving from NPM to Yarn?

Personally, I still use npm.

I am loathe to quote directly from docs, but they do a great job of explaining why, concisely enough that I don't see how to further summarize the ideas.

What are people's production experiences with it? Who knows, it's an infant to the general public.

From the get-go, the Yarn lockfile guarantees that repeatedly running yarn on the same repository results in the same packages.

Second, Yarn attempts to have good performance, with a cold cache, but especially with a warm cache.

Slightly longer version from the project:

Fast: Yarn caches every package it downloads so it never needs to again. It also parallelizes operations to maximize resource utilization so install times are faster than ever.

Reliable: Using a detailed, but concise, lockfile format, and a deterministic algorithm for installs, Yarn is able to guarantee that an install that worked on one system will work exactly the same way on any other system.

Secure: Yarn uses checksums to verify the integrity of every installed package before its code is executed.

And from the README.md:

pnpm uses hard links and symlinks to save one version of a module only ever once on a disk. When using npm or Yarn for example, if you have 100 projects using the same version of lodash, you will have 100 copies of lodash on disk. With pnpm, lodash will be saved in a single place on the disk and a hard link will put it into the node_modules where it should be installed.

As a result, you save gigabytes of space on your disk and you have a lot faster installations! If you'd like more details about the unique node_modules structure that pnpm creates and why it works fine with the Node.js ecosystem, read this small article: Why should we use pnpm?

Benefits of PNPM over Yarn and NPM 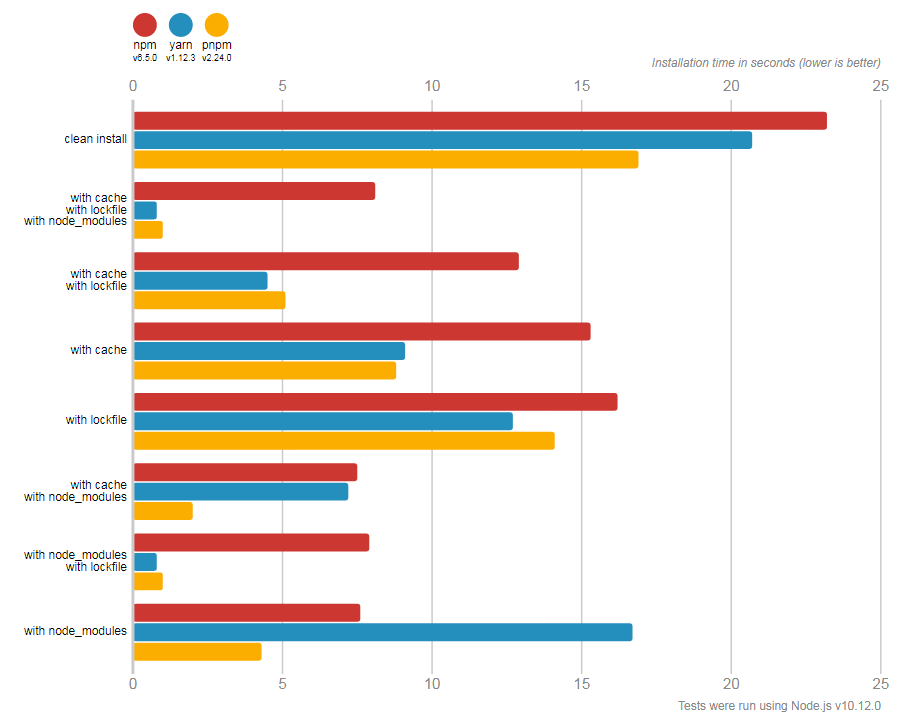 Trying to give a better overview for beginners.

npm has been historically (2010) the most popular package manager for JavaScript. If you want to use it for managing the dependencies of your project, you can type the following command:

This will generate a package.json file. It contains all the dependencies of the project.

would create a directory node_modules and download the dependencies (that you added to the package.json file) inside it.

It will also create a package-lock.json file. This file is used to describe the tree of dependecies that was generated. It allows developpers to install exectly the same dependencies. For example, you could imagine a developper upgrading a dependency to v2 and then v3 while another one directly upgrading to v3.

npm installs dependencies in a non-deterministically way meaning the two developper could have a different node_modules directory resulting into different behaviours. **npm has suffered from bad reputation as for example in February 2018: an issue was discovered in version 5.7.0 in which running sudo npm on Linux systems would change the ownership of system files, permanently breaking the operating system.

You can add Yarn to a project by typing:

This will create a package.json file. Then, install the dependencies with:

A folder node_modules will be generated. Yarn will also generate a file called yarn.lock. This file serve the same purpose as the package-lock.json but is instead constructed using a deterministic and reliable algorithm thus leading to consistant builds.

If you started a project with npm, you can actually migrate to Yarn easily. yarn will consume the same package.json. See Migrating from npm for more details.

However, npm has been improved with each new releases and some projects still uses npm over yarn.

The answer by @msanford covers almost everything, however, I'm missing the security (OWASP's Known Vulnerabilities) part.

You can check them using yarn audit, however, you cannot fix them. This is still an open issue on a GitHub (https://github.com/yarnpkg/yarn/issues/7075).

You can use npm audit fix, so some of them you can fix by yourself.

Both of them, i.e. npm audit & yarn audit have their own Continuous Integration tools. These are respectively https://github.com/IBM/audit-ci (used, works great!) and https://yarnpkg.com/package/audit-ci (haven't used).

When you install a package using Yarn (using yarn add packagename), it places the package on your disk. During the next install, this package will be used instead of sending an HTTP request to get the tarball from the registry.

Yarn comes with a handy license checker, which can become really powerful in case you have to check the licenses of all the modules you depend on.

If you are working on proprietary software, it does not really matter which one you use. With npm, you can use npm-shrinkwrap.js, while you can use yarn.lock with Yarn.

Is Yarn better than NPM?

In terms of speed and performance Yarn is better than NPM because it performs the parallel installation. Yarn is still more secure than NPM. However, Yarn uses more disk space than NPM.