How to atomically delete keys matching a pattern using Redis

In my Redis DB I have a number of prefix:<numeric_id> hashes.

Sometimes I want to purge them all atomically. How do I do this without using some distributed locking mechanism?

Starting with redis 2.6.0, you can run lua scripts, which execute atomically. I have never written one, but I think it would look something like this

Warning: As the Redis document says, because of performance maters, keys command should not use for regular operations in production, this command is intended for debugging and special operations. read more

Ok, i understood. What about this way: store current additional incremental prefix and add it to all your keys. For example:

Here's a completely working and atomic version of a wildcard delete implemented in Lua. It'll run much faster than the xargs version due to much less network back-and-forth, and it's completely atomic, blocking any other requests against redis until it finishes. If you want to atomically delete keys on Redis 2.6.0 or greater, this is definitely the way to go:

This is a working version of @mcdizzle's idea in his answer to this question. Credit for the idea 100% goes to him.

EDIT: Per Kikito's comment below, if you have more keys to delete than free memory in your Redis server, you'll run into the "too many elements to unpack" error. In that case, do:

Starting with v2.8 you really want to use the SCAN command instead of KEYS[1]. The following Bash script demonstrates deletion of keys by pattern:

[1] KEYS is a dangerous command that can potentially result in a DoS. The following is a quote from its documentation page:

Warning: consider KEYS as a command that should only be used in production environments with extreme care. It may ruin performance when it is executed against large databases. This command is intended for debugging and special operations, such as changing your keyspace layout. Don't use KEYS in your regular application code. If you're looking for a way to find keys in a subset of your keyspace, consider using sets.

UPDATE: a one liner for the same basic effect -

For those who were having trouble parsing other answers:

Replace key:*:pattern with your own pattern and enter this into redis-cli and you are good to go.

You can get more help related to keys pattern search from here :- https://redis.io/commands/keys. Use your convenient glob-style pattern as per your requirement like *YOUR_KEY_PREFIX* or YOUR_KEY_PREFIX?? or any other.

And if any of you have integrated Redis PHP library than below function will help you.

@mcdizle's solution is not working it works only for one entry.

This one works for all keys with same prefix

Note: You should replace 'prefix' with your key prefix...

You can also use this command to delete the keys:-

Suppose there are many types of keys in your redis like-

Ex- 'xyz_category_fpc' here xyz is a sitename, and these keys are related to products and categories of a E-Commerce site and generated by FPC.

If you use this command as below-

If you want to Delete Everything in Redis, then follow these Commands-

For Example:- in your shell:

If you have space in the name of the keys, you can use this in bash:

@itamar's answer is great, but the parsing of the reply wasn't working for me, esp. in the case where there are no keys found in a given scan. A possibly simpler solution, directly from the console:

This also uses SCAN, which is preferable to KEYS in production, but is not atomic.

I just had the same problem. I stored session data for a user in the format:

So, each entry was a seperate key-value pair. When the session is destroyed, I wanted to remove all session data by deleting keys with the pattern session:sessionid:* - but redis does not have such a function.

I think what might help you is the MULTI/EXEC/DISCARD. While not 100% equivalent of transactions, you should be able to isolate the deletes from other updates.

Maybe you only need to modify capital characters.

Other answers may not work if your key contains special chars - Guide$CLASSMETADATA][1] for instance. Wrapping each key into quotes will ensure they get properly deleted:

A version using SCAN rather than KEYS (as recommended for production servers) and --pipe rather than xargs.

I prefer pipe over xargs because it's more efficient and works when your keys contain quotes or other special characters that your shell with try and interpret. The regex substitution in this example wraps the key in double quotes, and escapes any double quotes inside.

This is not direct answer to the question, but since I got here when searching for my own answers, I'll share this here.

If you have tens or hundreds of millions of keys you have to match, the answers given here will cause Redis to be non responsive for significant amount of time (minutes?), and potentially crash because of memory consumption (be sure, background save will kick in in the middle of your operation).

The following approach is undeniably ugly, but I didn't find a better one. Atomicity is out of question here, in this case main goal is to keep Redis up and responsive 100% of the time. It will work perfectly if you have all your keys in one of databases and you don't need to match any pattern, but cannot use http://redis.io/commands/FLUSHDB because of it's blocking nature.

If there is a better way to do it, please let me know, I'll update the answer.

Example implementation with randomkey in Ruby, as a rake task, a non blocking substitute of something like redis-cli -n 3 flushdb:

It is simple implemented via "Remove branch" functionality in FastoRedis, just select branch which you want to remove. 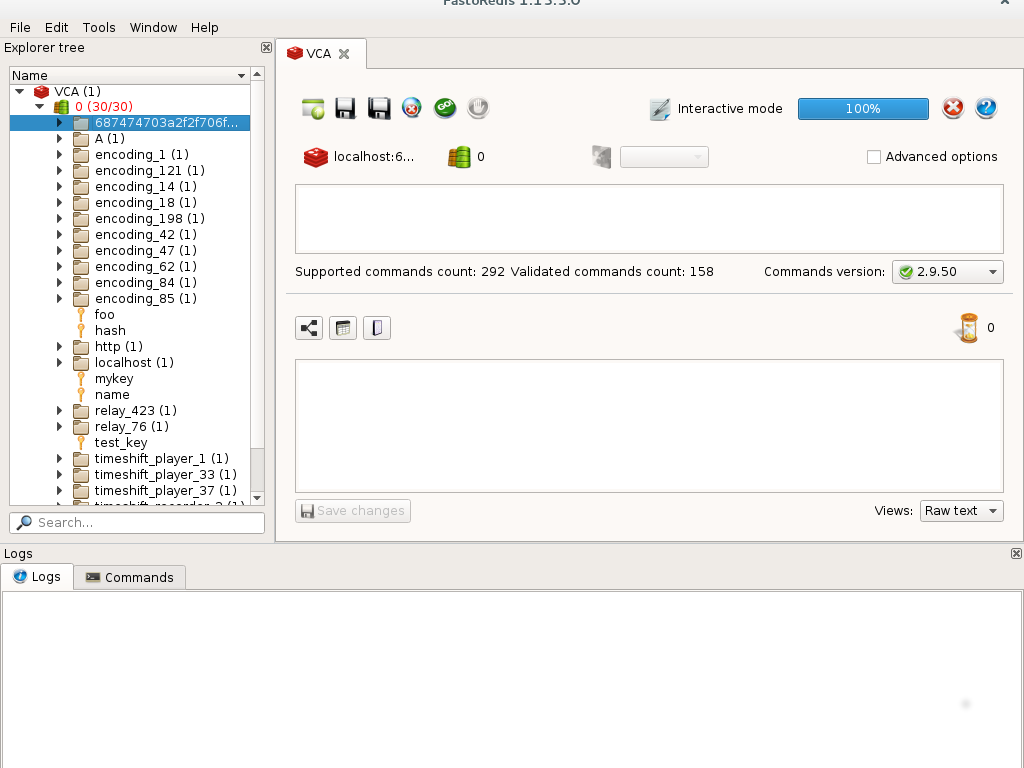 Please use this command and try :

I tried most of methods mentioned above but they didn't work for me, after some searches I found these points:

so I used this code to delete keys by pattern:

maybe you could set them all to EXPIREAT the same second - like a few minutes in the future - and then wait until that time and see them all "self-destruct" at the same time.

but I am not really sure how atomic that would be.

Ad of now, you can use a redis client and perform first SCAN (supports pattern matching) and then DEL each key individually.

However, there is an issue on official redis github to create a patter-matching-del here, go show it some love if you find it useful!

I support all answers related to having some tool or execute Lua expression.

One more option from my side:

In our production and pre-production databases there are thousands of keys. Time to time we need to delete some keys (by some mask), modify by some criteria etc. Of course, there is no way to do it manually from CLI, especially having sharding (512 logical dbs in each physical).

For this purpose I write java client tool that does all this work. In case of keys deletion the utility can be very simple, only one class there:

Below command worked for me.

Spring RedisTemplate itself provides the functionality. RedissonClient in the latest version has deprecated the "deleteByPattern" functionality.

Not the answer you're looking for? Browse other questions tagged redis or ask your own question.

161
How to empty a redis database?
35
Redis Python - how to delete all keys according to a specific pattern In python, without python iterating
9
How to delete keys matching a certain pattern in redis
5
Redis cli delete multiple keys
12
Is the UNLINK command always better than DEL command?
4
How to delete multiple redis keys with the same pattern in PHP using phpredis?
4
How to delete keys matching a pattern in Redis Cluster
0
Redis get key pattern
3
delete redis hash values in bulk based on the hash key name
10
How to bulk delete hundreds of thousands of keys with special characters in Redis
See more linked questions

497
Redis command to get all available keys?
203
How much faster is Redis than mongoDB?
178
How do I move a redis database from one server to another?
594
How do I run Redis on Windows?
709
How do I delete everything in Redis?
167
Redis is single-threaded, then how does it do concurrent I/O?
285
Redis strings vs Redis hashes to represent JSON: efficiency?
165
how to check redis instance version?
11
Is Redis' set command an atomic operation?