I develop a WPF4 application and in my app I need to let the user select a folder where the application will store something (files, generated reports etc.).

Or the only thing I can do, is to use an old-school WinForms dialog? If it's the only way to do what I need, how can I make it looking closer to Vista/7 style and not Win9x?

Windows Presentation Foundation 4.5 Cookbook by Pavel Yosifovich on page 155 in the section on "Using the common dialog boxes" says:

I wrote about it on my blog a long time ago, WPF's support for common file dialogs is really bad (or at least is was in 3.5 I didn't check in version 4), but it's easy to work around it.

You need to add the correct manifest to your application, that will give you a modern style message boxes and folder browser (WinForms, FolderBrowserDialog) but not WPF file open/save dialogs, this is described in those 3 posts (if you don't care about the explanation and only want the solution go directly to the 3rd):

Fortunately, the open/save dialogs are very thin wrappers around the Win32 API that is easy to call with the right flags to get the Vista/7 style (after setting the manifest)

Add The Windows API Code Pack-Shell to your project

If you don't want to use Windows Forms nor edit manifest files, I came up with a very simple hack using WPF's SaveAs dialog for actually selecting a directory.

No using directive needed, you may simply copy-paste the code below !

It should still be very user-friendly and most people will never notice.

The idea comes from the fact that we can change the title of that dialog, hide files, and work around the resulting filename quite easily.

It is a big hack for sure, but maybe it will do the job just fine for your usage...

In this example I have a textbox object to contain the resulting path, but you may remove the related lines and use a return value if you wish...

The only issues with this hack are :

Most people won't notice these, although I would definitely prefer using an official WPF way if microsoft would get their heads out of their asses, but until they do, that's my temporary fix.

The FolderBrowserDialog class from System.Windows.Forms is the recommended way to display a dialog that allows a user to select a folder.

Until recently, the appearance and behaviour of this dialog was not in keeping with the other file system dialogs, which is one of the reasons why people were reluctant to use it.

The good news is that FolderBrowserDialog was "modernized" in NET Core 3.0, so is now a viable option for those writing either Windows Forms or WPF apps targeting that version or later. 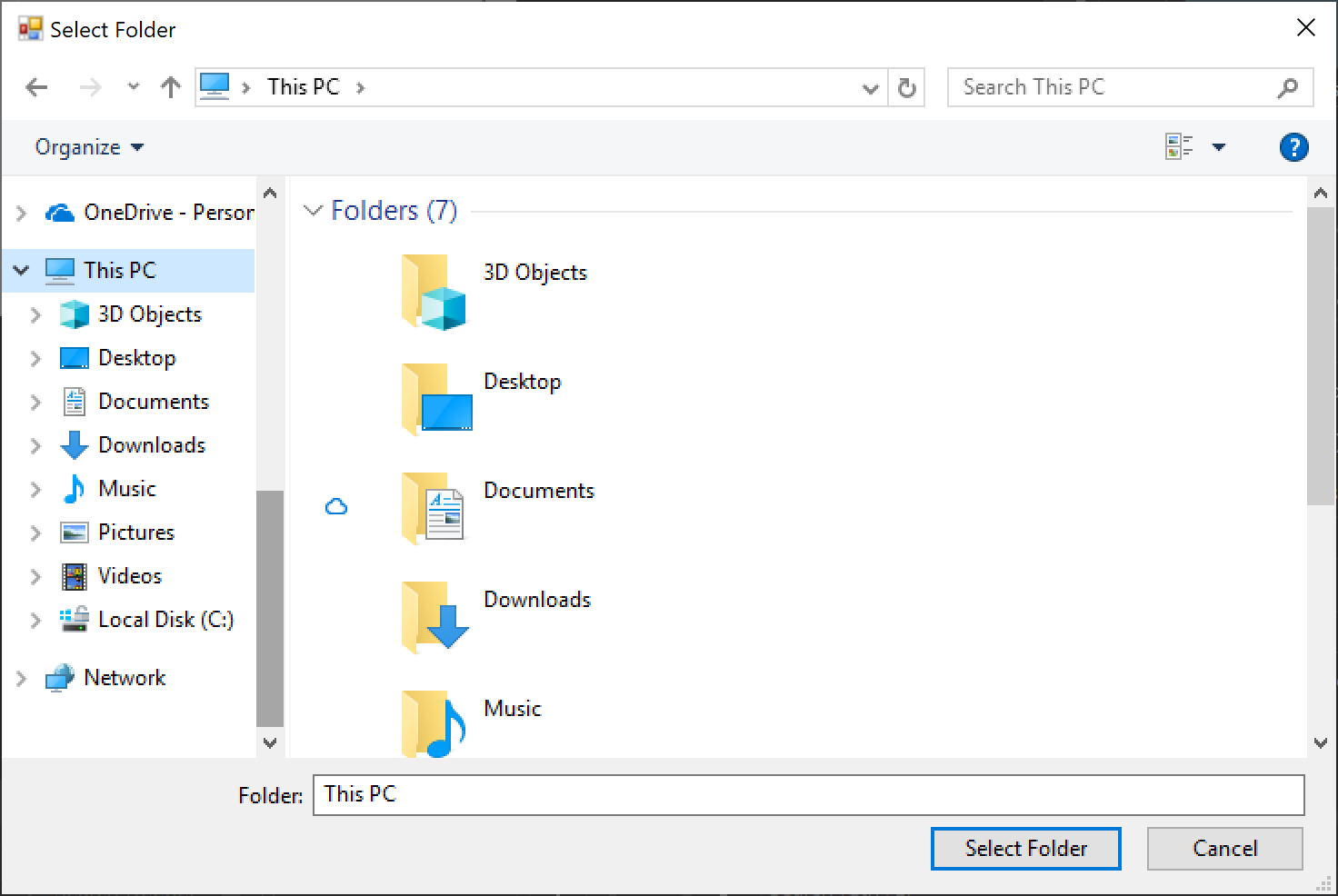 To reference System.Windows.Forms in a NET Core WPF app, it is necessary to edit the project file and add the following line:

This can be placed directly after the existing <UseWPF> element.

Then it's just a case of using the dialog:

FolderBrowserDialog has a RootFolder property that supposedly "sets the root folder where the browsing starts from" but whatever I set this to it didn't make any difference; SelectedPath seemed to be the better property to use for this purpose, however the trailing backslash is required.

Also, the ShowNewFolderButton property seems to be ignored as well, the button is always shown regardless.

Microsoft.Win32.OpenFileDialog is the standard dialog that any application on Windows uses. Your user won't be surprised by its appearance when you use WPF in .NET 4.0

The dialog was altered in Vista. WPF in .NET 3.0 and 3.5 still used the legacy dialog but that was fixed in .NET 4.0. I can only guess that you started this thread because you are seeing that old dialog. Which probably means you're actually running a program that is targeting 3.5. Yes, the Winforms wrapper did get the upgrade and shows the Vista version. System.Windows.Forms.OpenFileDialog class, you'll need to add a reference to System.Windows.Forms.

Based on Oyun's answer, it's better to use a dependency property for the FolderName. This allows (for example) binding to sub-properties, which doesn't work in the original. Also, in my adjusted version, the dialog shows selects the initial folder.

The Ookii Dialogs for WPF has a VistaFolderBrowserDialog class that provides a complete implementation of a folder browser dialog for WPF. 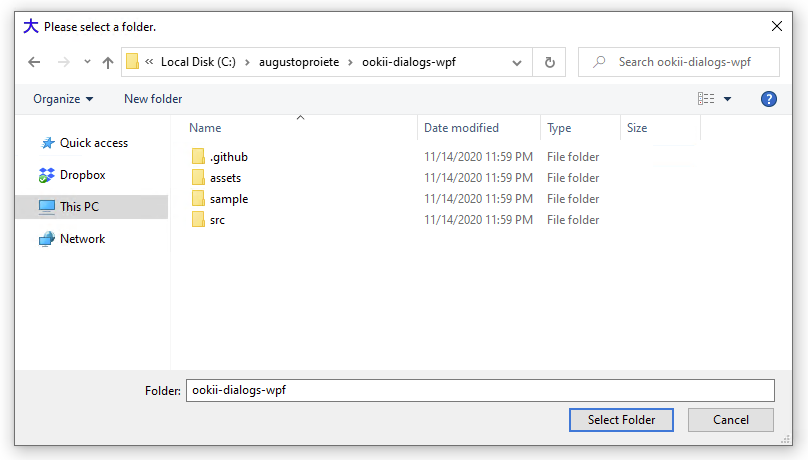 There's also a version that works with Windows Forms.

Only such dialog is FileDialog. Its part of WinForms, but its actually only wrapper around WinAPI standard OS file dialog. And I don't think it is ugly, its actually part of OS, so it looks like OS it is run on.

Other way, there is nothing to help you with. You either need to look for 3rd party implementation, either free (and I don't think there are any good) or paid.

Just to say one thing, WindowsAPICodePack can not open CommonOpenFileDialog on Windows 7 6.1.7600.

A comment on the original question from C. Augusto Proiete suggested Ookii dialogs (https://github.com/ookii-dialogs/ookii-dialogs-wpf). That's what I ended up using in my situation. Here's how I used it in my app.

731
What is the correct way to create a single-instance WPF application?
649
How do I use WPF bindings with RelativeSource?
519
What's the difference between StaticResource and DynamicResource in WPF?
453
Storing WPF Image Resources
652
In WPF, what are the differences between the x:Name and Name attributes?
1306
Difference Between Select and SelectMany
557
How do I exit a WPF application programmatically?
642
Best way to get application folder path
2
Are there any good platform independent Task Dialog implementations for .NET?
0
How to keep a MessageBox window in the foreground in WPF