Why is @font-face throwing a 404 error on woff files?

I'm using @font-face on my company's site and it works/looks great. Except Firefox and Chrome will throw a 404 error on the .woff file. IE does not throw the error. I have the fonts located at the root but I've tried with the fonts in the css folder and even giving the entire url for the font. If remove those fonts from my css file I don't get a 404 so I know it's not a syntax error.

Also, I used fontsquirrels tool to create the @font-face fonts and code:

I was experiencing this same symptom - 404 on woff files in Chrome - and was running an application on a Windows Server with IIS 6.

If you are in the same situation you can fix it by doing the following:

As of 2017: Woff fonts have now been standardised as part of the RFC8081 specification to the mime type font/woff and font/woff2. 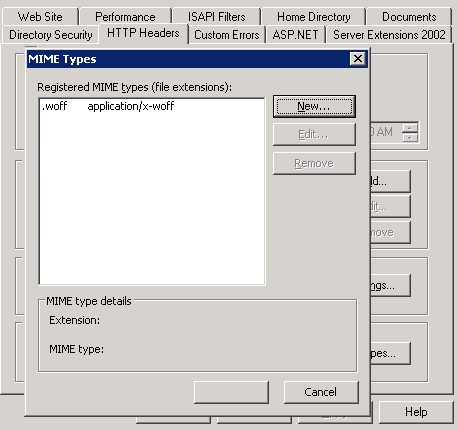 Thanks to Seb Duggan: http://sebduggan.com/posts/serving-web-fonts-from-iis

You can also add the MIME types in the web config:

The answer to this post was very helpful and a big time saver. However, I found that when using FontAwesome 4.50, I had to add an additional configuration for woff2 type of extension also as shown below else requests for woff2 type was giving a 404 error in Chrome's Developer Tools under Console> Errors.

According to the comment by S.Serp, the below configuration should be put within <system.webServer> tag.

Actually the @Ian Robinson answer works well but Chrome will continue complain with that message : "Resource interpreted as Font but transferred with MIME type application/x-woff"

If you get that, you can change from

and you will not have any Chrome console errors anymore !

I also came across the same issue. I think doing this configuration from the server level would be better since it applies for all the websites. 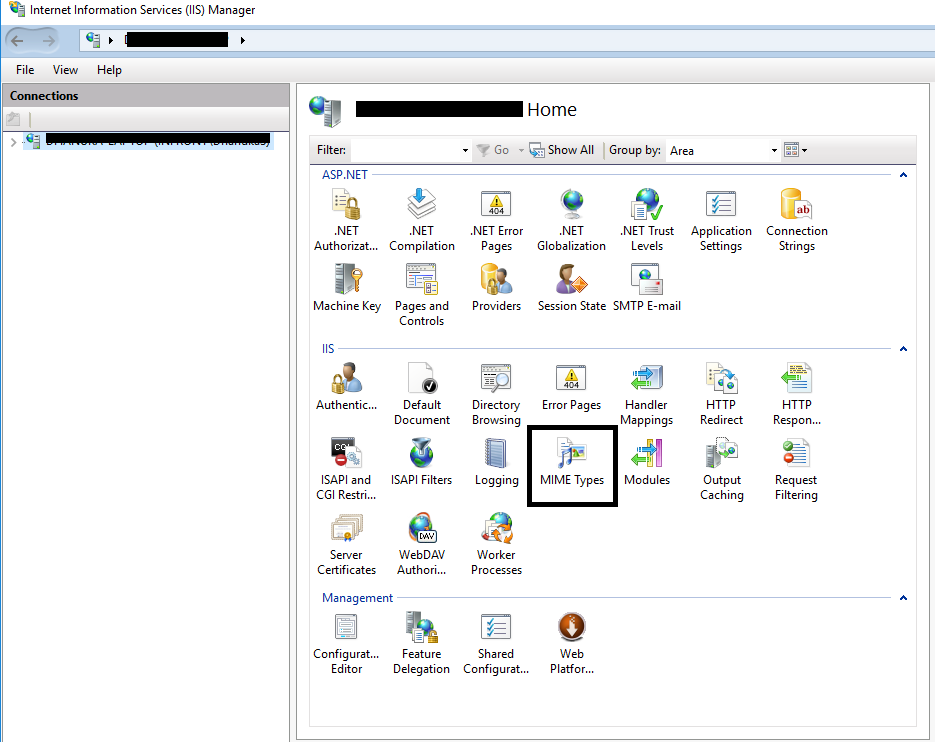 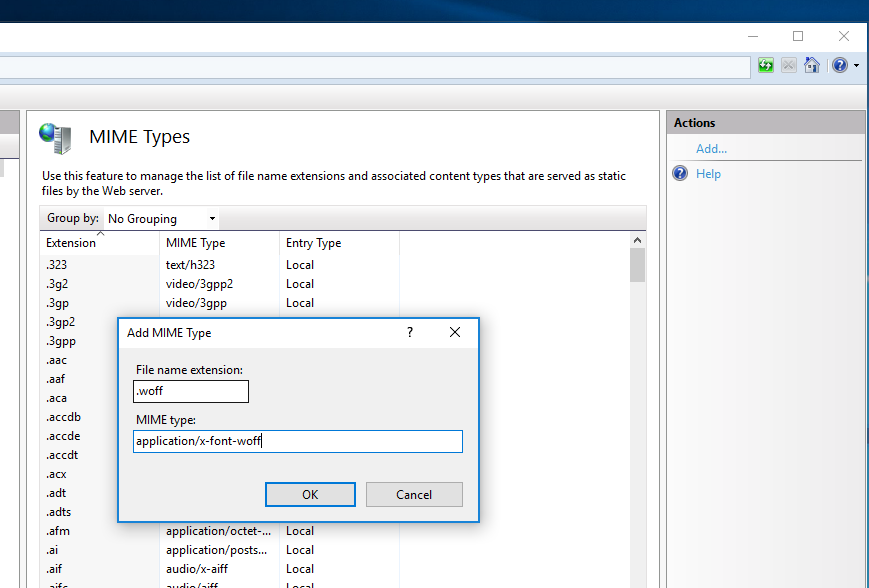 In addition to Ian's answer, I had to allow the font extensions in the request filtering module to make it work.

I tried a ton of things around permissions, mime types, etc, but for me it ended up being that the web.config had removed the Static file handler in IIS, and then explicitly added it back in for directories that would have static files. As soon as I added a location node for my directory and added the handler back, the requests stopped getting 404s.

If you are using CodeIgniter under IIS7 :

In your web.config file, add woff to the pattern

This might be obvious, but it has tripped me up with 404s a number of times... Make sure the fonts folder permissions are set correctly.

Also check your URL rewriter. It may throw 404 if something "weird" was found.

If you dont have access to your webserver config, you can also just RENAME the font file so that it ends in svg (but retain the format). Works fine for me in Chrome and Firefox.

If still not works after adding MIME types, please check whether "Anonymous Authentication" is enable in Authentication section in the site and make sure to select "Application pool identity" as per the given screen shot. 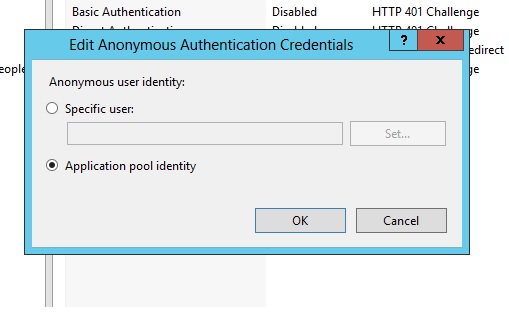 I had to use Mo'Bulletproofer method

3
While loading webfont through @font-face, .woff and .ttf files throw NetworkError: 404 Not Found
265
Font Awesome not working, icons showing as squares
573
Mime type for WOFF fonts?
8
Fontawesome does not work when served by IIS
9
With ASP.NET MVC 5 and Bootstrap 3 default install, why do styles get a 403 error and fonts throw a 404?
4
Fonts intermittently failing to load?
3
@font-face not working with github pages
3
@font-face showing 404 error for fonts i imported .woff and .ttf
1
Error on my Font-face - Give me 404 get to the side
0
404 Errors being thrown but user not being sent to the PageNotfound page
See more linked questions

6
Webfonts rendering differently on Windows, Mac and Linux
4
jQuery misalignment when using font-face
2
font face troubles.. not sure why it won't work?
359
Why should we include ttf, eot, woff, svg,... in a font-face
1
in jade, cannot get style @font-face to work
0
how can I load css with font-face from public folder in Bundle on the Symfony2?
0
@font-face - strange request URL for CSS fonts
0
CSS Import Font Issue
1
@font-face returns 404s on fonts
0
Celtic font - eot, woff, ttf - webfont