but when I try to look it up in the Github source code I find no col function in functions.py file, how can python import a function that doesn't exist?

It exists. It just isn't explicitly defined. Functions exported from pyspark.sql.functions are thin wrappers around JVM code and, with a few exceptions which require special treatment, are generated automatically using helper methods.

If you carefully check the source you'll find col listed among other _functions. This dictionary is further iterated and _create_function is used to generate wrappers. Each generated function is directly assigned to a corresponding name in the globals.

Finally __all__, which defines a list of items exported from the module, just exports all globals excluding ones contained in the blacklist.

If this mechanisms is still not clear you can create a toy example:

An undesired side effect of such metaprogramming approach is that defined functions might not be recognized by the tools depending purely on static code analysis. This is not a critical issue and can be safely ignored during development process.

Depending on the IDE installing type annotations might resolve the problem (see for example zero323/pyspark-stubs#172).

a workaround is to import functions and call the col function from there.

As of VS Code 1.26.1 this can be solved by modifying python.linting.pylintArgs setting:

That issue was explained on github: https://github.com/DonJayamanne/pythonVSCode/issues/1418#issuecomment-411506443

As explained above, pyspark generates some of its functions on the fly, which makes that most IDEs cannot detect them properly. However, there is a python package pyspark-stubs that includes a collection of stub files such that type hints are improved, static error detection, code completion, ... By just installing with

(where x.x.x has to be replaced with your pyspark version (2.3.0. in my case for instance)), col and other functions will be detected, without changing anything at your code for most IDEs (Pycharm, Visual Studio Code, Atom, Jupyter Notebook, ...)

To import all pyspark functions directly;

You may also want to use an alias in order to solve function shadowing;

I ran into a similar problem trying to set up a PySpark development environment with Eclipse and PyDev. PySpark uses a dynamic namespace. To get it to work I needed to add PySpark to "force Builtins" as below. 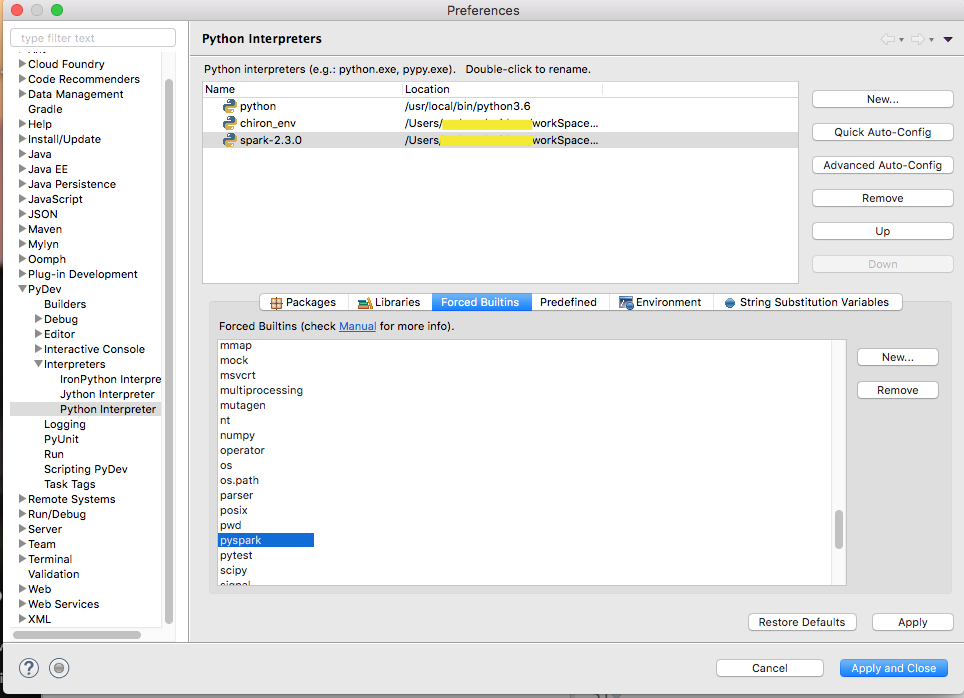 As pointed out by @zero323, there are several spark functions that have wrappers generated at runtime by adding to the globals dict, then adding those to __all__. As pointed out by @vincent-claes referencing the functions using the function path (as F or as something else, I prefer something more descriptive) can make it so the imports don't show an error in PyCharm. However, as @nexaspx alluded to in a comment on that answer, that shifts the warning to the usage line(s). As mentioned by @thomas pyspark-stubs can be installed to improve the situation.

But, if for some reason adding that package is not an option (maybe you are using a docker image for your environment and can't add it to the image right now), or it isn't working, here is my workaround: first, add an import for just the generated wrapper with an alias, then disable the inspection for just that import. This allows all the usages to still have inspections for other functions in the same statement, reduces the warning points to just one, and then ignores that one warning.

If you have several imports, group them like so to have just one noinspection:

(this is how PyCharm formatted it when I used the Reformat File command).

Not the answer you're looking for? Browse other questions tagged python apache-spark pyspark apache-spark-sql pyspark-sql or ask your own question.

3
lit() function missing in PySpark?
29
PySpark error: AttributeError: 'NoneType' object has no attribute '_jvm'
7
Unresolved reference while trying to import col from pyspark.sql.functions in python 3.5
3
How to partition data by datetime in AWS Glue?
4
How do I read a text file & apply a schema with PySpark?
0
Explode array values into multiple columns using PySpark
0
Falling to import max/min/avg/col from pyspark.sql.functions
-1
PySpark 3.1.2 - where are functions such as day, date, month