How do I run a node.js app as a background service?

Since this post has gotten a lot of attention over the years, I've listed the top solutions per platform at the bottom of this post.

I want my node.js server to run in the background, i.e.: when I close my terminal I want my server to keep running. I've googled this and came up with this tutorial, however it doesn't work as intended. So instead of using that daemon script, I thought I just used the output redirection (the 2>&1 >> file part), but this too does not exit - I get a blank line in my terminal, like it's waiting for output/errors.

I've also tried to put the process in the background, but as soon as I close my terminal the process is killed as well.

So how can I leave it running when I shut down my local computer?

Copying my own answer from How do I run a Node.js application as its own process?

Note if you're new to Unix: /var/www/myapp/app.js should have #!/usr/bin/env node on the very first line and have the executable mode turned on chmod +x myapp.js.

Copy your service file into the /etc/systemd/system.

Start it with systemctl start myapp.

Enable it to run on boot with systemctl enable myapp.

See logs with journalctl -u myapp

This is taken from How we deploy node apps on Linux, 2018 edition, which also includes commands to generate an AWS/DigitalOcean/Azure CloudConfig to build Linux/node servers (including the .service file).

You can use Forever, A simple CLI tool for ensuring that a given node script runs continuously (i.e. forever): https://www.npmjs.org/package/forever

UPDATE - As mentioned in one of the answers below, PM2 has some really nice functionality missing from forever. Consider using it.

EDIT I wanted to add that the accepted answer is really the way to go. I'm using forever on instances that need to stay up. I like to do npm install -g forever so it's in the node path and then just do forever start server.js

This might not be the accepted way, but I do it with screen, especially while in development because I can bring it back up and fool with it if necessary.

The screen will detach and survive you logging off. Then you can get it back back doing screen -r. Hit up the screen manual for more details. You can name the screens and whatnot if you like.

2016 Update: The node-windows/mac/linux series uses a common API across all operating systems, so it is absolutely a relevant solution. However; node-linux generates systemv init files. As systemd continues to grow in popularity, it is realistically a better option on Linux. PR's welcome if anyone wants to add systemd support to node-linux :-)

This is a pretty old thread now, but node-windows provides another way to create background services on Windows. It is loosely based on the nssm concept of using an exe wrapper around your node script. However; it uses winsw.exe instead and provides a configurable node wrapper for more granular control over how the process starts/stops on failures. These processes are available like any other service:

The module also bakes in some event logging: 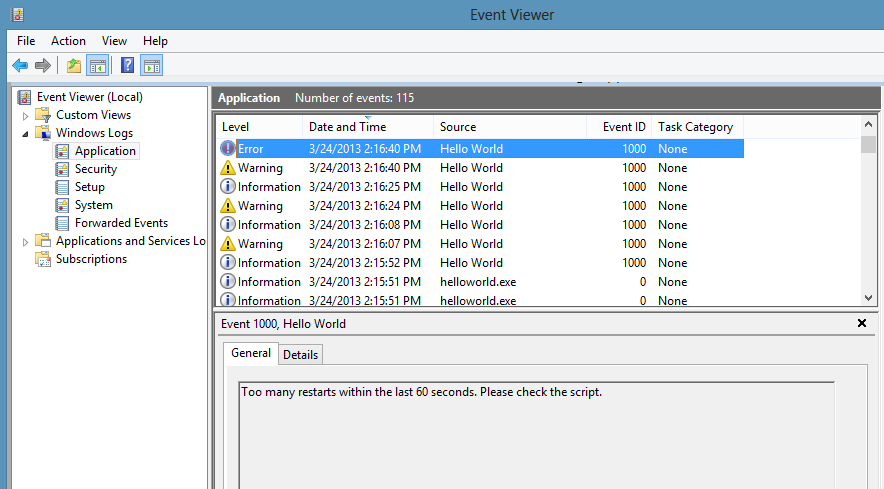 Daemonizing your script is accomplished through code. For example:

The module supports things like capping restarts (so bad scripts don't hose your server) and growing time intervals between restarts.

Since node-windows services run like any other, it is possible to manage/monitor the service with whatever software you already use.

Finally, there are no make dependencies. In other words, a straightforward npm install -g node-windows will work. You don't need Visual Studio, .NET, or node-gyp magic to install this. Also, it's MIT and BSD licensed.

In full disclosure, I'm the author of this module. It was designed to relieve the exact pain the OP experienced, but with tighter integration into the functionality the Operating System already provides. I hope future viewers with this same question find it useful.

If you simply want to run the script uninterrupted until it completes you can use nohup as already mentioned in the answers here. However, none of the answers provide a full command that also logs stdin and stdout.

If you want to run a node server (or something that should start back up when the server restarts) you should use systemd / systemctl.

UPDATE: i updated to include the latest from pm2:

for many use cases, using a systemd service is the simplest and most appropriate way to manage a node process. for those that are running numerous node processes or independently-running node microservices in a single environment, pm2 is a more full featured tool.

If you are running OSX, then the easiest way to produce a true system process is to use launchd to launch it.

Build a plist like this, and put it into the /Library/LaunchDaemons with the name top-level-domain.your-domain.application.plist (you need to be root when placing it):

When done, issue this (as root):

and you are running.

And you will still be running after a restart.

For other options in the plist look at the man page here: https://developer.apple.com/library/mac/documentation/Darwin/Reference/Manpages/man5/launchd.plist.5.html

Try to run this command if you are using nohup -

You can also use forever to start server

I am simply using the daemon npm module:

I use Supervisor for development. It just works. When ever you make changes to a .js file Supervisor automatically restarts your app with those changes loaded.

Here's a link to its Github page

You can easily make it watch other extensions with -e. Another command I use often is -i to ignore certain folders.

You can use nohup and supervisor to make your node app run in the background even after you log out.

Node.js as a background service in WINDOWS XP

The accepted answer is probably the best production answer, but for a quick hack doing dev work, I found this:

nodejs scriptname.js & didn't work, because nodejs seemed to gobble up the &, and so the thing didn't let me keep using the terminal without scriptname.js dying.

But I put nodejs scriptname.js in a .sh file, and nohup sh startscriptname.sh & worked.

Definitely not a production thing, but it solves the "I need to keep using my terminal and don't want to start 5 different terminals" problem.

If you are running nodejs in linux server, I think this is the best way.

Create a service script and copy to /etc/init/nodejs.conf

June 2017 Update:
Solution for Linux: (Red hat). Previous comments doesn't work for me. This works for me on Amazon Web Service - Red Hat 7. Hope this works for somebody out there.

this will install a new windows service which will be listed at services.msc from there you can start or stop the service, this service will auto start and you can configure to restart if it fails.

To round out the various options suggested, here is one more: the daemon command in GNU/Linux, which you can read about here: http://libslack.org/daemon/manpages/daemon.1.html. (apologies if this is already mentioned in one of the comments above).

Check out fugue! Apart from launching many workers, you can demonize your node process too!

PM2 is a production process manager for Node.js applications with a built-in load balancer. It allows you to keep applications alive forever, to reload them without downtime and to facilitate common system admin tasks. https://github.com/Unitech/pm2

I am surprised that nobody has mentioned Guvnor

I have tried forever, pm2, etc. But, when it comes to solid control and web based performance metrics, I have found Guvnor to be by far the best. Plus, it is also fully opensource. 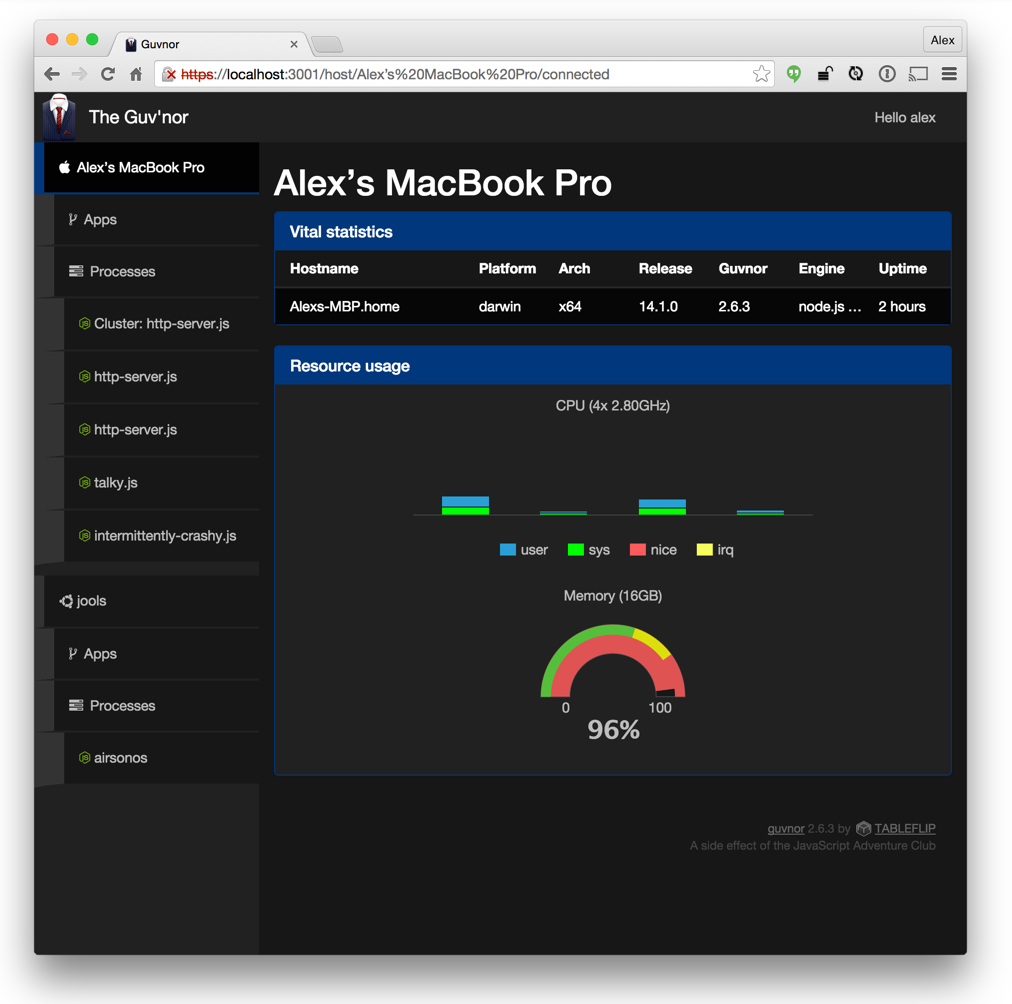 Edit : However, I am not sure if it works on windows. I've only used it on linux.

has anyone noticed a trivial mistaken of the position of "2>&1" ?

I use tmux for a multiple window/pane development environment on remote hosts. It's really simple to detach and keep the process running in the background. Have a look at tmux

For people using newer versions of the daemon npm module - you need to pass file descriptors instead of strings:

Since I'm missing this option in the list of provided answers I'd like to add an eligible option as of 2020: docker or any equivalent container platform. In addition to ensuring your application is working in a stable environment there are additional security benefits as well as improved portability.

There is docker support for Windows, macOS and most/major Linux distributions. Installing docker on a supported platform is rather straight-forward and well-documented. Setting up a Node.js application is as simple as putting it in a container and running that container while making sure its being restarted after shutdown.

Note: Last parameter is selecting folder containing that Dockerfile instead of the Dockerfile itself. You may pick a different one using option -f.

Use this command for starting the container:

This command is assuming your app is listening on port 3000 and you want it to be exposed on port 80 of your host.

This is a very limited example for sure, but it's a good starting point.

If you are using pm2, you can use it with autorestart set to false:

This will generate a sample ecosystem.config.js:

It was due to using the user/group set to: 'nobody'.

Upon googling, it seems that using user/group as 'nobody'/'nogroup' is bad practice for daemons as answered here on the unix stack exchange.

It worked great after I set user/group to my actual user and group.

You can enter whomai and groups to see your available options to fix this.

My service file for a full stack node app with mongodb:

This answer is quite late to the party, but I found that the best solution was to write a shell script that used the both the screen -dmS and nohup commands.

I also add the >> logfile bit on the end so I can easily save the node console.log() statements.

Why did I use a shell script? Well I also added in an if statement that checked to see if the node myserver.js process was already running.

That way I was able to create a single command line option that both lets me keep the server going and also restart it when I have made changes, which is very helpful for development.

Not the answer you're looking for? Browse other questions tagged node.js process background server daemon or ask your own question.

3
How to set up Node.js to always be running on server (like Apache)
3
How to I run a process on a digital ocean droplet and keep it running when I log out?
0
How to keep npm start running forever
1
How to Stop Node.js on Ubuntu and log out without stopping
0
I need some service to run node server, i mean not just "nodejs server.js"
1
How to launch AWS instance so that it works when I turn off my computer?
288
How to make a node.js application run permanently?
199
How do I run a Node.js application as its own process?
91
How does one start a node.js server as a daemon process?
81
Fixing a systemd service 203/EXEC failure (no such file or directory)
See more linked questions

1658
How do I debug Node.js applications?
1866
Writing files in Node.js
597
Node / Express: EADDRINUSE, Address already in use - Kill server
2686
How do I pass command line arguments to a Node.js program?
494
How to run Node.js as a background process and never die?
2194
How to decide when to use Node.js?
2078
How to exit in Node.js
1198
Using Node.js as a simple web server
350
How to completely remove node.js from Windows