How to best write a Python function (check_list) to efficiently test if an element (x) occurs at least n times in a list (l)?

My first thought was:

But this doesn't short-circuit once x has been found n times and is always O(n).

A simple approach that does short-circuit would be:

I also have a more compact short-circuiting solution with a generator:

Are there other good solutions? What is the best efficient approach?

Instead of incurring extra overhead with the setup of a range object and using all which has to test the truthiness of each item, you could use itertools.islice to advance the generator n steps ahead, and then return the next item in the slice if the slice exists or a default False if not:

Note that like list.count, itertools.islice also runs at C speed. And this has the extra advantage of handling iterables that are not lists.

You could use the second argument of index to find the subsequent indices of occurrences:

The official documentation does not mention in its Python Tutuorial, section 5 the method's second or third argument, but you can find it in the more comprehensive Python Standard Library, section 4.6:

(8) index raises ValueError when x is not found in s. When supported, the additional arguments to the index method allow efficient searching of subsections of the sequence. Passing the extra arguments is roughly equivalent to using s[i:j].index(x), only without copying any data and with the returned index being relative to the start of the sequence rather than the start of the slice.

The following graph draws the (approximate) border line, at which both methods perform equally well (the X-axis is logarithmic): 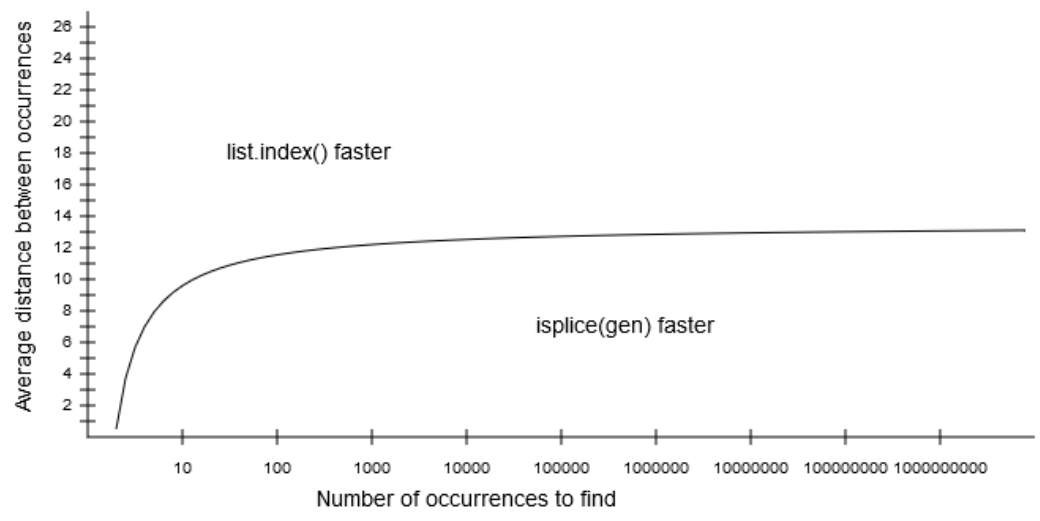 Ultimately short circuiting is the way to go if you expect a significant number of cases will lead to early termination. Let's explore the possibilities:

Take the case of the list.index method versus the list.count method (these were the two fastest according to my testing, although ymmv)

For list.index if the list contains n or more of x and the method is called n times. Whilst within the list.index method, execution is very fast, allowing for much faster iteration than the custom generator. If the occurances of x are far enough apart, a large speedup will be seen from the lower level execution of index. If instances of x are close together (shorter list / more common x's), much more of the time will be spent executing the slower python code that mediates the rest of the function (looping over n and incrementing i)

The benefit of list.count is that it does all of the heavy lifting outside of slow python execution. It is a much easier function to analyse, as it is simply a case of O(n) time complexity. By spending almost none of the time in the python interpreter however it is almost gaurenteed to be faster for short lists.

I would recommend using Counter from the collections module.

This shows another way of doing it.

Not the answer you're looking for? Browse other questions tagged python performance list python-3.x optimization or ask your own question.

1
Check if object occurs more than 2 times in list
12
Fastest way to check whether a value exists more often than X in a list
6
clever any() like function to check if at least n elements are True?
8
How to know a generated sequence is at most a certain length
-1
Is there a simple loop for rolling 6 dice until atleast 4 are the same number?

3234
How do I check if a list is empty?
1502
How to remove an element from a list by index
2058
Getting the last element of a list
1934
How do I get the number of elements in a list?
659
Python progression path - From apprentice to guru
939
Is there a simple way to delete a list element by value?
656
How to sort a list/tuple of lists/tuples by the element at a given index?
813
Fastest way to check if a value exists in a list
1420
Replacing a 32-bit loop counter with 64-bit introduces crazy performance deviations with _mm_popcnt_u64 on Intel CPUs