PowerShell says "execution of scripts is disabled on this system."

I am trying to run a cmd file that calls a PowerShell script from cmd.exe, but I am getting this error:

Management_Install.ps1 cannot be loaded because the execution of scripts is disabled on this system.

I ran this command:

When I run Get-ExecutionPolicy from PowerShell, it returns Unrestricted.

File C:\Projects\Microsoft.Practices.ESB\Source\Samples\Management Portal\Install\Scripts\Management_Install.ps1 cannot be loaded because the execution of scripts is disabled on this system. Please see "get-help about_signing" for more details.

If you're using Windows Server 2008 R2 then there is an x64 and x86 version of PowerShell both of which have to have their execution policies set. Did you set the execution policy on both hosts?

As an Administrator, you can set the execution policy by typing this into your PowerShell window:

When you are done, you can set the policy back to its default value with:

You may see an error:

So you may need to run the command like this (as seen in comments):

I had a similar issue and noted that the default cmd on Windows Server 2012, was running the x64 one.

You can check mode using

Most of the existing answers explain the How, but very few explain the Why. And before you go around executing code from strangers on the Internet, especially code that disables security measures, you should understand exactly what you're doing. So here's a little more detail on this problem.

From the TechNet About Execution Policies Page:

The benefits of which, as enumerated by PowerShell Basics - Execution Policy and Code Signing, are:

To check your current execution policy, you can run Get-ExecutionPolicy. But you're probably here because you want to change it.

To do so you'll run the Set-ExecutionPolicy cmdlet.

You'll have two major decisions to make when updating the execution policy.

For example: if you wanted to change the policy to RemoteSigned for just the CurrentUser, you'd run the following command:

Access to the registry key 'HKEY_LOCAL_MACHINE\SOFTWARE\Microsoft\PowerShell\1\ShellIds\Microsoft.PowerShell' is denied. To change the execution policy for the default (LocalMachine) scope, start Windows PowerShell with the "Run as administrator" option.

If you want to tighten up the internal restrictions on your own scripts that have not been downloaded from the Internet (or at least don't contain the UNC metadata), you can force the policy to only run signed scripts. To sign your own scripts, you can follow the instructions on Scott Hanselman's article on Signing PowerShell Scripts.

Note: Most people are likely to get this error whenever they open PowerShell because the first thing PowerShell tries to do when it launches is execute your user profile script that sets up your environment however you like it.

The file is typically located in:

You can find the exact location by running the PowerShell variable

If there's nothing that you care about in the profile, and don't want to fuss with your security settings, you can just delete it and PowerShell won't find anything that it cannot execute.

We can get the status of current ExecutionPolicy by the command below:

By default it is Restricted. To allow the execution of PowerShell scripts we need to set this ExecutionPolicy either as Unrestricted or Bypass.

We can set the policy for Current User as Bypass by using any of the below PowerShell commands:

Unrestricted policy loads all configuration files and runs all scripts. If you run an unsigned script that was downloaded from the Internet, you are prompted for permission before it runs.

Whereas in Bypass policy, nothing is blocked and there are no warnings or prompts during script execution. Bypass ExecutionPolicy is more relaxed than Unrestricted.

Also running this command before the script also solves the issue:

If you are in an environment where you are not an administrator, you can set the Execution Policy just for you (CurrentUser), and it will not require administrator.

You can set it to RemoteSigned:

You can read all about Getting and Setting Execution policy in the help entries:

Go to Start Menu and search for "Windows PowerShell ISE".

Right click the x86 version and choose "Run as administrator".

Repeat these steps for the 64-bit version of Powershell ISE too (the non x86 version).

I'm just clarifying the steps that @Chad Miller hinted at. Thanks Chad!

RemoteSigned: all scripts you created yourself will be run, and all scripts downloaded from the Internet will need to be signed by a trusted publisher.

I'm using Windows 10 and was unable to run any command. The only command that gave me some clues was this:

But this didn't work. It was limited. Probably new security policies for Windows10. I had this error:

Set-ExecutionPolicy: Windows PowerShell updated your execution policy successfully, but the setting is overridden by a policy defined at a more specific scope. Due to the override, your shell will retain its current effective execution policy of...

So I found another way (solution):

Open a Windows PowerShell command window and run the below query to change ExecutionPolicy:

If it asks for confirming changes, press Y and hit Enter.

First, you need to open the PowerShell window and run this command.

Then it will ask you to confirm. Type Y and press Enter.

When you run this command, you can see that your system has set all policies for the current user as remotely. It will take a few seconds to complete this process.

To check if the execution policy has set. Type:

If it was set, the output would be like this:

You should run this command:

And execute your script.

Open the command prompt in Windows. If the problem is only with PowerShell, use the following command:

you may try this and select "All" Option

Now run the run command what ever you are using.. Trust this the app will runs.. Enjoy :)

You can also bypass this by using the following command:

You can also read this article by Scott Sutherland that explains 15 different ways to bypass the PowerShell Set-ExecutionPolicy if you don't have administrator privileges:

I have also faced a similar issue. Try this.

As I'm using Windows, I followed the steps as given below. Open a command prompt as an administrator and then go to this path:

Look for the file ng.ps1 in this folder (directory) and then delete it (del ng.ps1).

You can also clear npm cache after this though it should work without this step as well.

If you have Git installed, just use Git Bash. 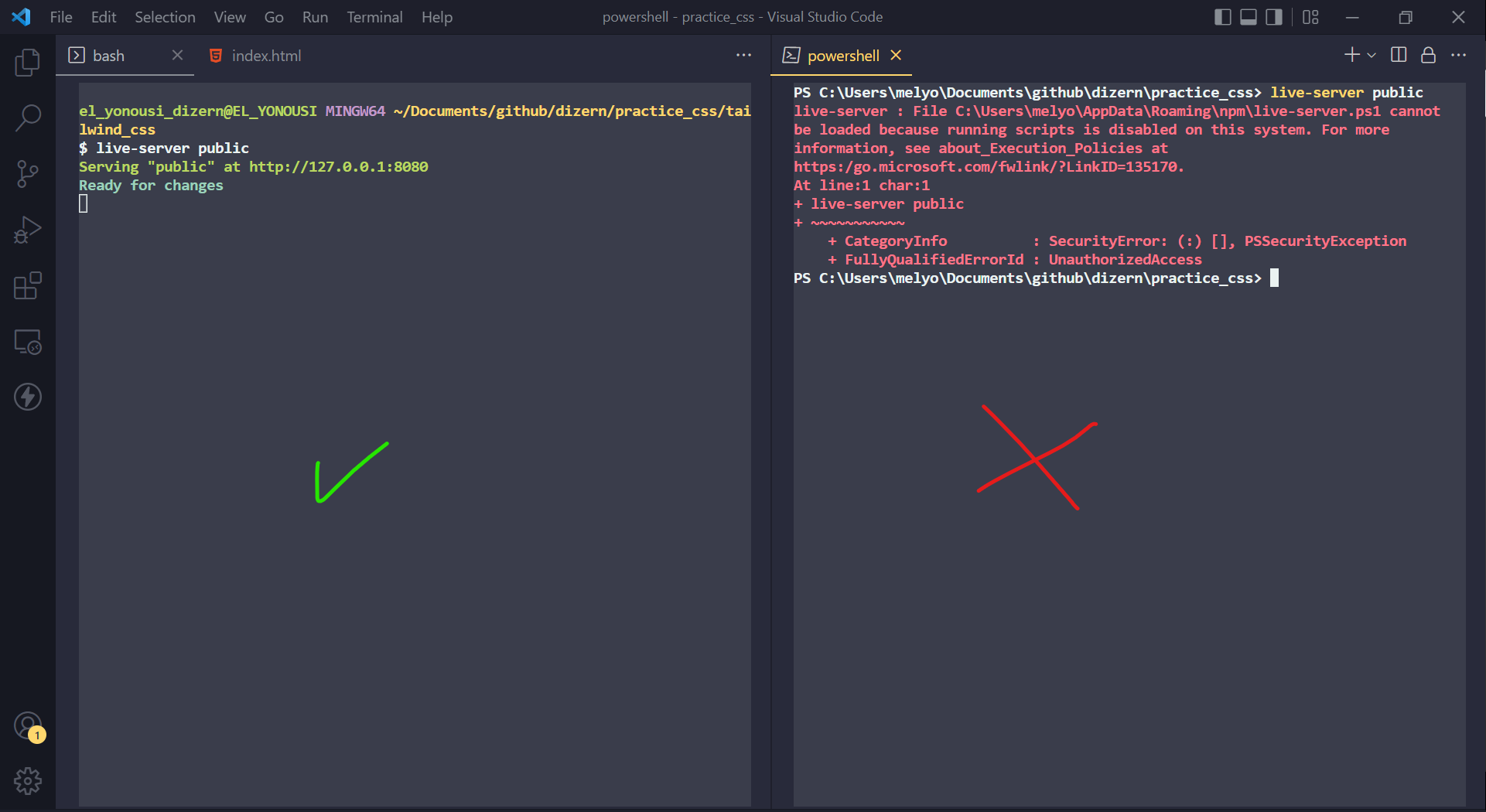 Executing this command in administrator mode in PowerShell will solve the problem.

If you are not administrator, you can use this:

It is indeed very easy. Just open the settings application. Navigate to Privacy and Security: 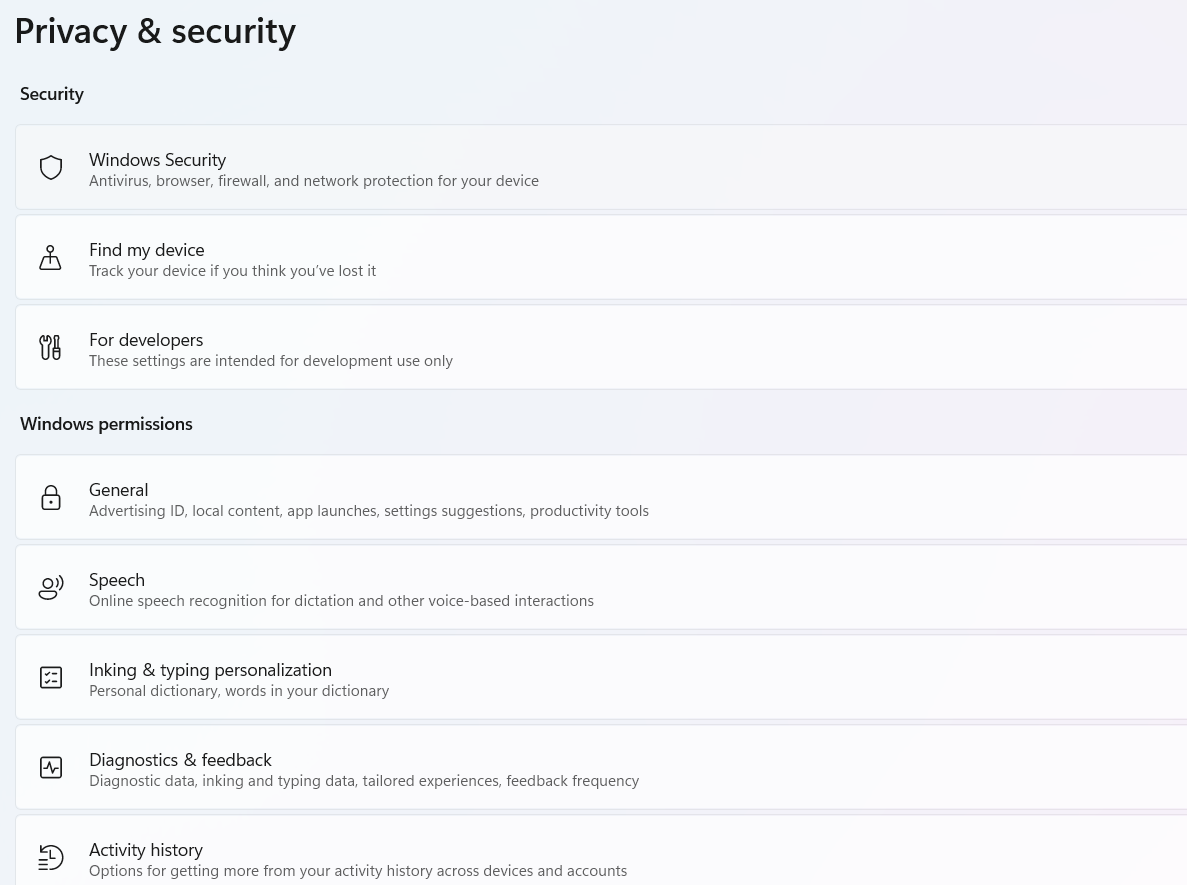 Click on For Developers and scroll to the bottom and find the PowerShell option under which check the checkbox stating "Change the execution policy ... remote scripts". 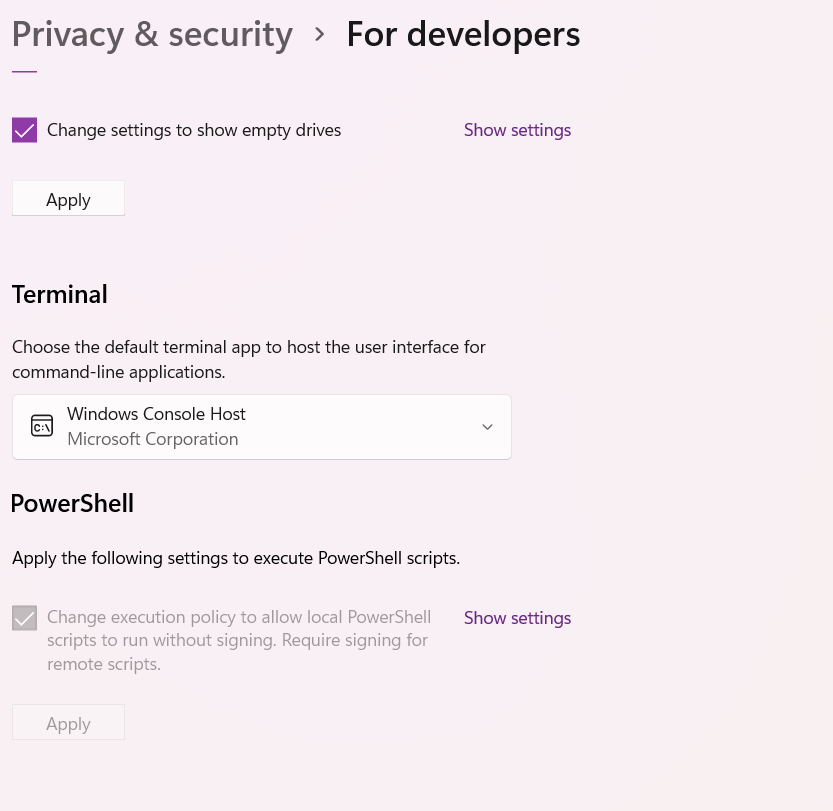 In Windows 10, enable the option under the name: 'Install apps from any source, including loose files.' 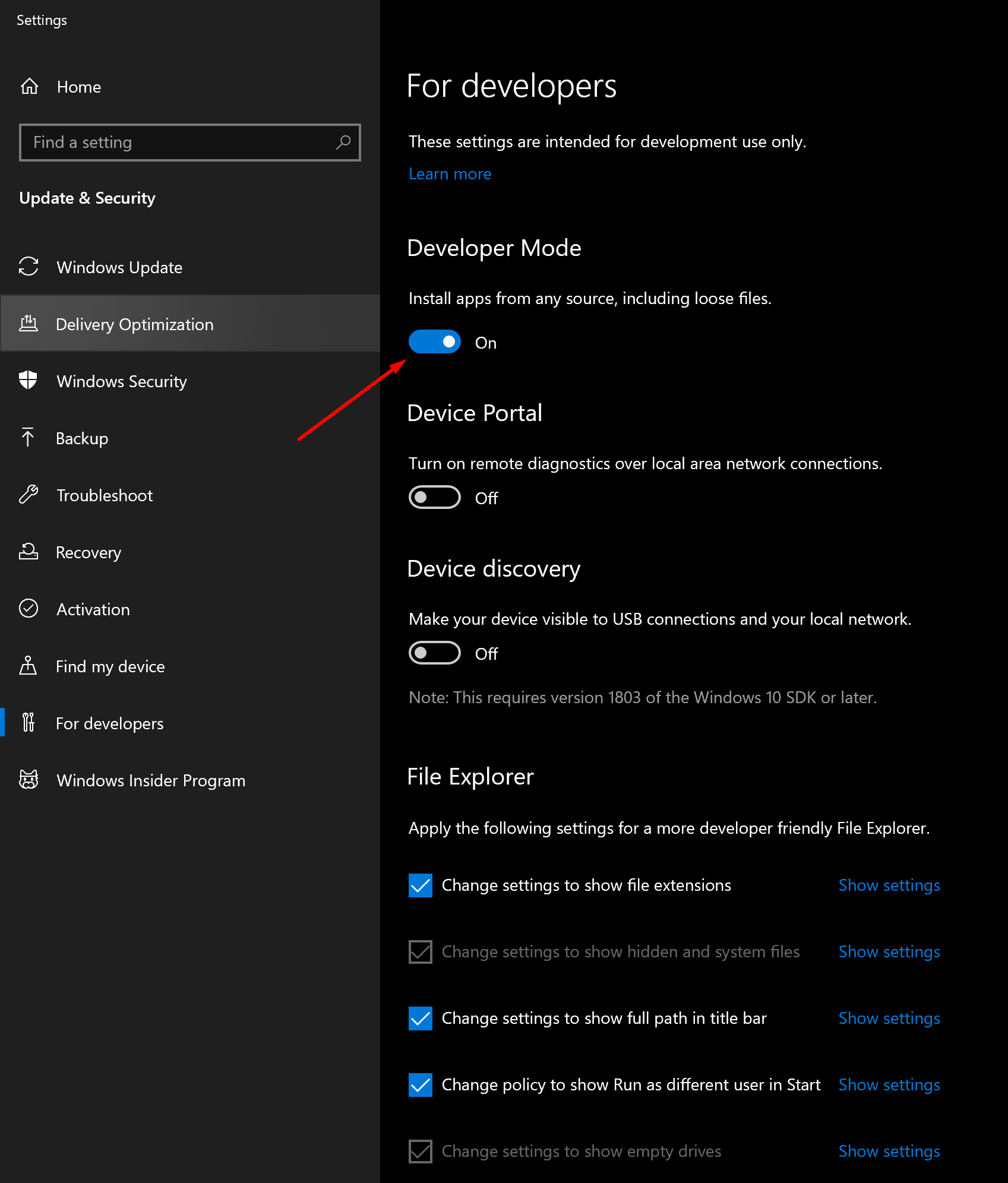 It fixed the issue for me.

Open PowerShell as a administrator. Run the following command

To fix this issue, we have to set the execution policy, so that the PowerShell script runs on the particular machine. Here is how:

Open PowerShell Console by selecting “Run as Administrator” and set the execution Policy with the command: Set-ExecutionPolicy RemoteSigned Type “Y” when prompted to proceed

In PowerShell 2.0, the execution policy was set to disabled by default.

From then on, the PowerShell team has made a lot of improvements, and they are confident that users will not break things much while running scripts. So from PowerShell 4.0 onward, it is enabled by default.

In your case, type Set-ExecutionPolicy RemoteSigned from the PowerShell console and say yes.