What is database pooling?

I just wanted to know the concept of database connection pooling and how it is achieved.

Typically, opening a database connection is an expensive operation, especially if the database is remote. You have to open up network sessions, authenticate, have authorisation checked, and so on. Pooling keeps the connections active so that, when a connection is later requested, one of the active ones is used in preference to having to create another one.

Refer to the following diagram for the next few paragraphs:

A "suitable connection" is just one that already has access to the database using the correct information (such as database instance, credentials, and possibly other things).

Similarly, there's a Close API call (4) which doesn't actually call the real RealClose, rather it puts the connection back into the pool (5) for later use. At some point, connections in the pool may be actually closed (6). This could be done by a thread that continuously monitors the pool and calls RealClose if they are old enough or certain other conditions are met.

That's a pretty simplistic explanation. Real implementations may be arbitrarily more complex such as the previously mentioned:

Database connection pooling is a specific case for a more general one, that of maintaining cached things where they may be expensive to start. As you see from a similar answer of mine, it can apply to thread pools as well (or pools of backup tapes, communication devices, laser cutters, or dozens of other different things).

In all cases, it's best if it's "expensive" to bring another resource online rather than use one that had previously been online.

That linked answer also shows one possible algorithm for deciding when to start up or (fully) shut down a resource. 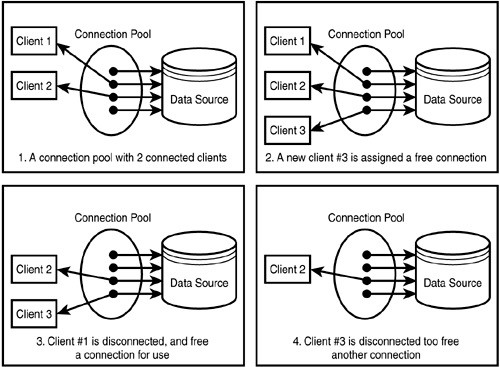 As the name suggests. If a few people wants to swim, they can swim in the same swimming-pool, does it really make sense to construct a new swimming-pool each time someone adds in ? Time and cost is a priority.

Database connection pooling is simply caching connections to databases so that they can be reused next time to reduce the cost of establishing a new connection each time we want to connect to a database.

Connection Pooling concept not only in Java but across many programming languages. Creating a new connection object is costly so a fixed number of connections are made and maintained in lifecycle creating a virtual pool Java Just ( http://javajust.com/javaques.html ) see question 14 on this page

391
How many threads is too many?
6
Why a connection pool of many opened connections is less costly for a system than to open a new connection every time?
3
Should I keep Sequelize instance throughout server running time?
2
Request guarantees with hibernate or connection pooling
0
Save data to db every second resolving lost or slow db connection
1
Where to create and close database connection?
0
connection pooling for Firestore spring application
0
Firebird ADO.NET connection does not dispose file properly after disposing the connection
1
The best way to manage Redis connection in aiohttp app?

1749
Insert into ... values ( SELECT ... FROM ... )
1113
How do I quickly rename a MySQL database (change schema name)?
1341
How can I list the tables in a SQLite database file that was opened with ATTACH?
2106
What is the "N+1 selects problem" in ORM (Object-Relational Mapping)?
743
How to get size of mysql database?
274
Entity Framework and Connection Pooling
1556
What are the options for storing hierarchical data in a relational database?
642
Import SQL dump into PostgreSQL database