I have a case where in my Vue.js with webpack web app, I need to display dynamic images. I want to show img where file name of images are stored in a variable. That variable is a computed property which is returning a Vuex store variable, which is being populated asynchronously on beforeMount.

However it works perfectly when I just do:

My case is similar to this fiddle, but here it works with img URL, but in mine with actual file paths, it does not work.

What should be correct way to do it?

I got this working by following code

But not sure why my earlier approach did not work.

Here is a shorthand that webpack will use so you don't have to use require.context.

And I find that the first 2 paragraphs in here explain why this works? well.

Please note that it's a good idea to put your pet pictures inside a subdirectory, instead of lobbing it in with all your other image assets. Like so: ./assets/pets/

The @ symbol points to the src directory.

There is another way of doing it by adding your image files to public folder instead of assets and access those as static images.

This is where you need to put your static images: 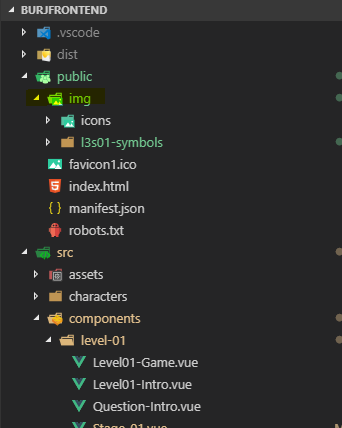 Your best bet is to just use a simple method to build the correct string for the image at the given index:

then do the following inside your v-for:

Here's the JSFiddle (obviously the images don't show, so I've put the image src next to the image):

Vue.js uses vue-loader, a loader for WebPack which is set up to rewrite/convert paths at compile time, in order to allow you to not worry about static paths that would differ between deployments (local, dev, one hosting platform or the other), by allowing you to use relative local filesystem paths. It also adds other benefits like asset caching and versioning (you can probably see this by checking the actual src URL being generated).

So having a src that would normally be handled by vue-loader/WebPack set to a dynamic expression, evaluated at runtime, will circumvent this mechanism and the dynamic URL generated will be invalid in the context of the actual deployment (unless it's fully qualified, that's an exception).

If instead, you would use a require function call in the dynamic expression, vue-loader/WebPack will see it and apply the usual magic.

For example, this wouldn't work:

While this would work:

I just found out about this myself. Took me an hour but... you live, you learn, right? 😊

I also hit this problem and it seems that both most upvoted answers work but there is a tiny problem, webpack throws an error into browser console (Error: Cannot find module './undefined' at webpackContextResolve) which is not very nice.

What I did is place random image into require statement and hiding that image in css, so nobody sees it.

The static path is resolved by Webpack as a module dependency through loader. But for dynamic path you need to use require to resolve the path. You can then switch between images using a boolean variable & ternary expression.

And of course toggle the value of the boolean through some event handler.

I also faced this problem.

Here is a good article that clarifies this: https://blog.lichter.io/posts/dynamic-images-vue-nuxt/

Tried all of the answers here but what worked for me on Vue2 is like this.

As I am using Gridsome, this way worked for me.

well the best and easiest way that worked for me was this of which i was fetching data from an API..

the getPic method takes one parameter which is the name of the file and it returns the absolute path of the file maybe from your server with the file name simple...

here is an example of a component where i used this:

I encountered the same problem. This worked for me by changing '../assets/' to './assets/'.

The image needs to be transcribed. What worked for me is putting the images in public folder. i.e public/assets/img

I have a solution you may want to try.

then images can be called with the established for loop

As of today, working with VUE 3 + Typescript & composition API, what I have done is wrap require function in try catch to handle crash.

and call this function in image tag:

3
Image not displaying in loop Vue.js
0
Why when i pass source manually it works but when i tried to pass source with vuex it doesn't - Vue3 / Vuex / Composition API
0
Vue.js relative path in data
130
React Native - Image Require Module using Dynamic Names
11
Passing and binding img src from props in Vue.js
19
Vue.js dynamic image src with webpack require() not working
2
How to use dynamic images in Nuxt?
3
Vue.js dynamic image paths not loading
2
Dynamic img src URL with "OR" statement not working properly in NUXT component
2
How do I reference an image path in an img src in Vue JS
See more linked questions

2453
How can I make a div not larger than its contents?
4008
What is the !! (not not) operator in JavaScript?
2720
Open a URL in a new tab (and not a new window)
1045
How to display Base64 images in HTML
3171
Why does my JavaScript code receive a "No 'Access-Control-Allow-Origin' header is present on the requested resource" error, while Postman does not?
425
Disable input conditionally (Vue.js)
328
Can I pass parameters in computed properties in Vue.Js
677
Vue.js - How to properly watch for nested data
0
Can't load images from assets folder in nested components (Vue.js 2.0 / Webpack)