Examples of Delegates in Swift [closed]

I have been trying to learn how delegation with protocols work. I understood everything, but I can't think of when to use delegation other than when using table views and possibly scroll views.

In general, when is delegation used?

First of all, you should know that Delegation Pattern is not exclusive for iOS world:

In software engineering, the delegation pattern is a design pattern in object-oriented programming that allows object composition to achieve the same code reuse as inheritance.

But working with delegation in the iOS world is so common, I assume that you can see many of classes that provide a delegation/datasource for giving the ability to provide properties or behaviors for the used instance. It is one of main mechanisms of how objects talk to each other in CocoaTouch.

However, delegation is not the only way to let objects talk to each other in iOS, you might want to know that there are:

Remark: in case if you are interested in comparing between them, you might want to check the following articles:

When to use Delegation?

So, the question is: "So why should I use delegation instead of those options?"

I will try to make it simple; I would suggest the use of delegation when you have one to one relationship between two objects. Just to make it clearer, the goal of talking a little bit about the NotificationCenter is to try to make sense when delegations are used:

How to Apply Delegation?

For the purpose of simplifying, I would mention it as steps:

Does it sounds a little confusing? What about a real-world example?

Imagine that you are building an application related to playing audios. Some of the viewControllers should have a view of an audio player. In the simplest case, we assume that it should have a play/pause button and another button for, let's say, showing a playlist somehow, regardless of how it may look like.

So far so good, the audio player view has its separated UIView class and .xib file; it should be added as a subview in any desired viewController.

The "#" comments represents the steps of "How to Apply Delegation?" section.

As one of the most popular examples of using delegation is Passing Data Back between View Controllers.

Delegation is used when you want to pass some information or state of object A to another object B. Usually object B is the object that created object A.

I will list some situations where you would use delegation. 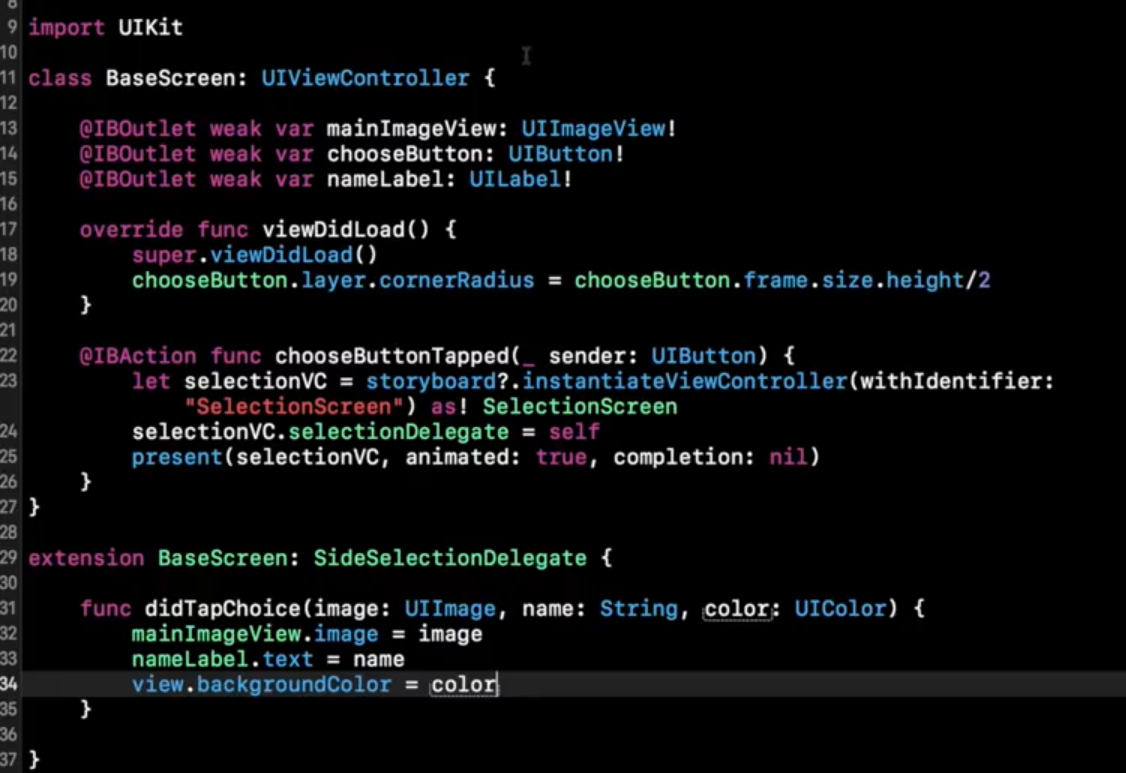 Create Another class then insert code 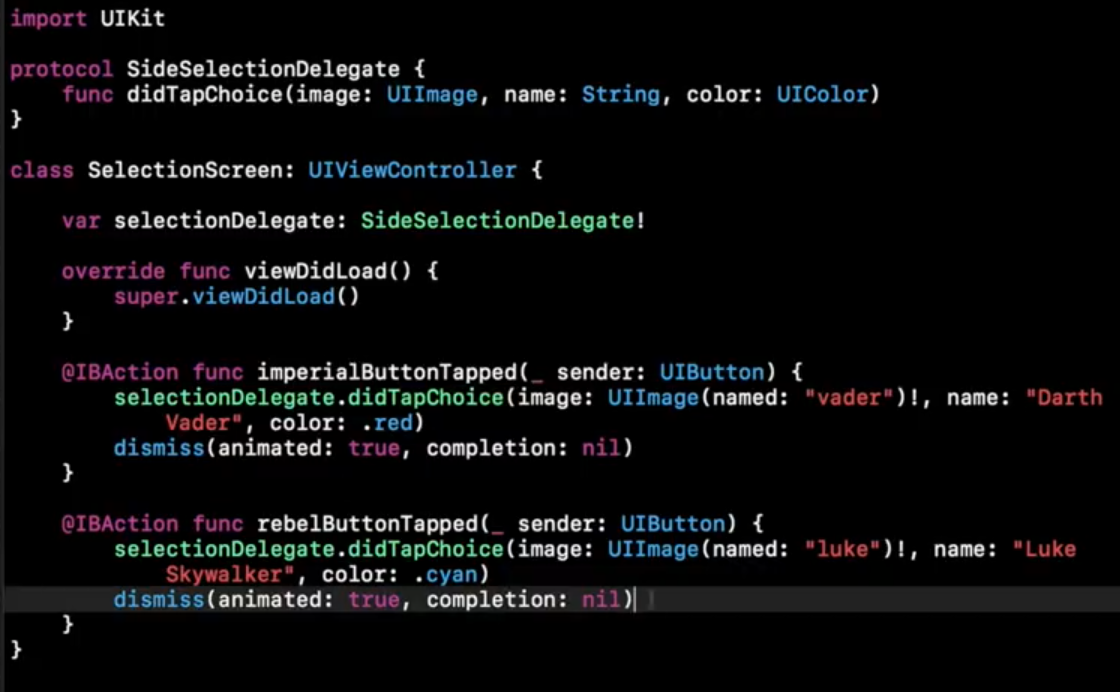 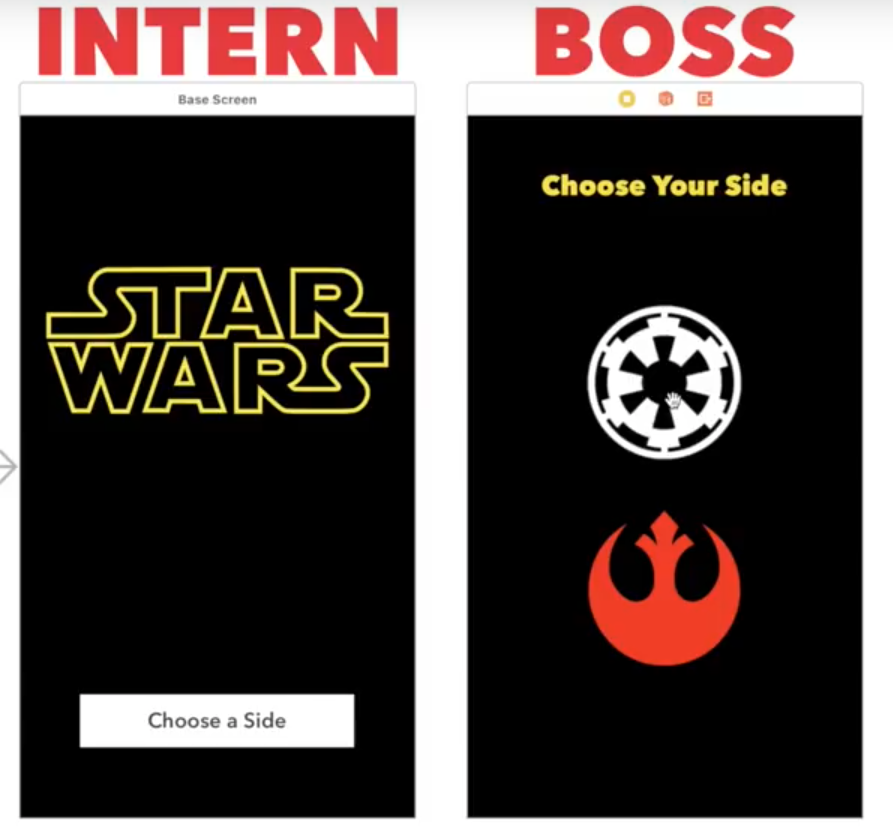 Delegation in IOS world and mostly in MVC (Model View Controller) is a way for the View to talk to the Controller and it's called "blind communication" and delegation means to give the " leading stick " to another object ( doesn't really care who is taking over but usually the Controller) to control over components that the view can not control on it's own (remember it's only a view) or doesn't own to make it more simple ....
the controller can talk to a view but the view can not talk to the controller without Delegation

Not the answer you're looking for? Browse other questions tagged swift design-patterns delegates protocols delegation or ask your own question.

738
How do I create delegates in Objective-C?
140
What is a C++ delegate?
956
How do I call Objective-C code from Swift?
925
#pragma mark in Swift?
130
Delegates in swift?
921
Swift Beta performance: sorting arrays
7
Swift delegate protocol for generic class
0
Using protocol and delegation in SWIFT