What is the difference between Amazon ECS and Amazon EC2?

I'm just getting started on AWS EC2. I understand that EC2 is like a remote computer where I can do pretty much everything I want. Then I found out about ECS. I know it uses Docker, but I'm confused about the relationship between these two.

Is ECS just a Docker install in EC2? If I already have an EC2 and I start an ECS, does it mean I have two instances?

Is ECS just a docker install in EC2? If I already have a EC2, then I start a ECS, does it mean I have two instance?

No. AWS ECS is just a logical grouping (cluster) of EC2 instances, and all the EC2 instances part of an ECS act as Docker host i.e. ECS can send command to launch a container on them (EC2). If you already have an EC2, and then launch ECS, you'll still have a single instance. If you add/register (by installing the AWS ECS Container Agent) the EC2 to ECS it'll become the part of the cluster, but still a single instance of EC2.

An Amazon ECS without any EC2 registered (added to the cluster) is good for nothing.

To simplify it further, if you have launched an Amazon ECS with no EC2 instances added to it, it's good for nothing i.e. you can't do anything about it. ECS makes sense only once one (or more) EC2 instances are added to it.

The next confusing thing here is the container term - which is not fully virtualized machine instances, and Docker is one technology we can use to create container instances. Docker is a utility you can install on our machine, which makes it a Docker host, and on this host you can create containers (same as virtual machines - but much more light-weight). To sum up, ECS is just about clustering of EC2 instances, and uses Docker to instantiate containers/instances/virtual machines on these (EC2) hosts.

By default, your container instance launches into your default cluster. If you want to launch into your own cluster instead of the default, choose the Advanced Details list and paste the following script into the User data field, replacing your_cluster_name with the name of your cluster.

Or, if you have an ecs.config file in Amazon S3 and have enabled Amazon S3 read-only access to your container instance role, choose the Advanced Details list and paste the following script into the User data field, replacing your_bucket_name with the name of your bucket to install the AWS CLI and write your configuration file at launch time. Note For more information about this configuration, see Storing Container Instance Configuration in Amazon S3.

Just to clarify it further – you can create containers on your single EC2 instance without ECS. Install any of the containerization technology i.e. Docker and run the create container command, setting your EC2 as a Docker host, and have as much Docker containers as you want (or as much as your EC2's resources allow).

In simple words,ECS is a manager while EC2 instances are just like employees. All the employees (EC2) under this manager(ECS) can perform "Docker" tasks and the manager also understands "docker" pretty well. So,whenever you need "docker" resources, you show up to the Manager. Manager already has status from every employee(EC2) decides which one should perform the task.

Now, coming back to your question, a manager without an "employee" does not make sense but is definitely possible. 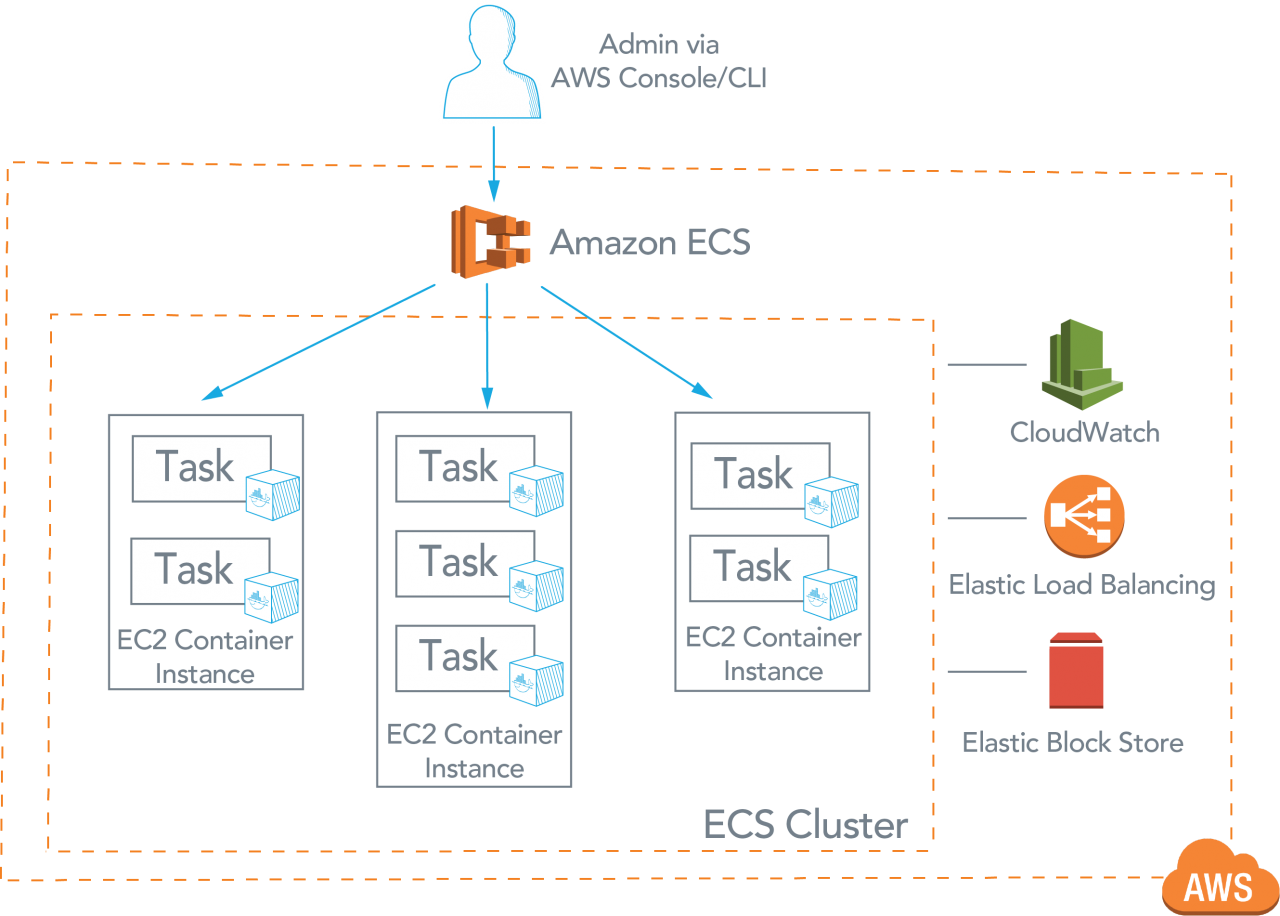 EC2 allows you to launch individual instances which you can use for pretty much whatever you like. ECS is a container service, which means it will launch instances that will be ready to launch container applications. The main distinction between the two services is that with EC2 you have to manage each instance separately in whatever method you choose (manually, using a CM tool or any other way) - deploy your applications and maintain the connection between the servers yourself. ECS allows you to launch a cluster of machines that will serve as the deployment ground of your container apps, allowing you to treat all instances in the cluster as one big instance available for your container workload.

And to answer your question - You can start an ECS cluster with no instances in it, but then it won't be able to run anything on it. Once you register an EC2 instance inside an ECS cluster, containers are ready to run in it. So the bottom line is - you can use both ECS and EC2 with only one instance, but that is not the actual use case these services were built for.

You can ask it to run one or more Docker images, either as an auto-scaling capable "Service" or as an ad-hoc "Task".

The services and tasks run on a "Cluster". Originally, a Cluster was a group of one or more pre-configured EC2 servers running ECS Cluster Agent. The Cluster Agent would schedule the containers on the EC2 server. These EC2 servers show up in your EC2 Instances list and are charged at regular EC2 per-minute costs - You can even SSH onto them like any normal EC2 server. If you wanted more capacity to run more Services or Tasks, or if you wanted resilience against EC2 failure, then you would more EC2 servers.

Around November 2017, AWS added ECS Fargate. Now a Cluster can run "serverless" without provisioning EC2 nodes. You simply define the amount of CPU and memory your Task or Service requires to operate, meaning that you just pay for the CPU and memory time rather than the EC2.

ECS stands for 'Elastic Container Service'. It is a container orchestration service.
Lets say you have a Docker container running and you decide to update the Docker image. It's relatively easy task to stop, pull and run if you have one container running but its tedious to do the same steps if you have 10 to 100 of containers running.
With AWS ECS you can have this control. You specify if update is required provide the latest image id and ECS will handle the stop, pull and run etc. commands for you. It also provides with much more additional features, refer - https://aws.amazon.com/ecs/features/
EC2 stand for 'Elastic Compute Cloud'. In simple terms its a virtual machine.
ECS uses EC2 to run your containers.
'These running docker containers (tasks) are run on EC2 instances'.

Okay, as you know EC2 is a virtual machine on AWS and ECS is a container orchestration system on AWS.

To use ECS, you need to run your container into some virtual machines which EC2 is one of an option to provide that.

You will need to install ecs-agent on EC2 to make a connection with ECS. And ECS also can monitor the resource usages on your EC2. So basically you choose the more high-level EC2 type, then more resource(CPU/MEM) your container can use.

ECS is a container orchestrator just like Kubernetes or Docker swarm, EC2 is an Amazon Elastic Compute Cloud platform for Creating Virtual Machines. ECS allows you to run containers on either serverless environments (Fargate) where you don't have to run any VM or in a non managed environments where you host the containers on EC2 instances.

EC2 is a compute service that enables applications to run on AWS, whereas ECS is an AWS service used primarily to orchestrate Docker containers.

2
Is 2 the minimum number of instances to properly deploy a container on AWS?
0
why run dockers on AWS