I am learning the Intel Architecture. So far I have encountered several types of interrupts:

Anyone can help compare their essential difference in plain words from the below aspects?

Different ways to to trigger a SMI for a processor

In the beginning, the x86 CPU had two pins that could be used to notify the incoming of an interrupt: INTR (Interrupt Request) and NMI (Non Maskable Interrupt)

While the picture depicts an 8086 chip, these pins stuck around until the introduction of what is known as the LAPIC (more on this below) during the Pentium era.

As an informative note, between the INTR and a device there usually was a chip called 8259A also known as PIC (Programmable Interrupt Controller).

NMI when asserted caused the CPU to interrupt the current program and start executing the interrupt handler for the interrupt vector 2. Simply put, asserting NMI generates the interrupt 2.
Clearing the IF won't mask an NMI, it was possible to mask any signal going to the NMI pin in hardware though: setting the MSb of port 70h would do the trick.

The idea behind NMIs is to partition the interrupts into two categories: one made of the common interrupts, interrupt that are used by device under a normal functioning of the system and that an OS could want to mask; the other category made by interrupt much more serious that an OS wouldn't want to mask (except for transitory states).

In the DOS days the interrupt 2 handler was set by the BIOS, this vendor specific handler read a proprietary set of hardware registers, detected the error (like a memory ECC error, a bus error due to a suddend unplug), and attempted a recovery (like a reset or a memory scrubbing).

This mechanism made sense at the time because the OS worked in conjunction with the BIOS, being able to perform a cli without affecting the NMI was great simplification.

With the advent of protected mode, the BIOS interrupt 2 handler, made for real mode, became useless.
Some kernels used the NMI for implementing a kernel watchdog timer since NMI interrupts would be generated even after a cli.

Intel recognised that using interrupts to give control to the firmware was no longer a solution as new execution modes could be added to the CPU, a more transparent solution was needed.
So they created the SMM (System Management Mode).

Contrary to a normal interrupt the SMM is a special mode of the CPU, quoting chapter 34 of manual 2 from Intel:

When SMM is invoked through a system management interrupt (SMI), the processor saves the current state of the processor (the processor’s context), then switches to a separate operating environment defined by a new address space. The system management software executive (SMI handler) starts execution in that environment, and the critical code and data of the SMI handler reside in a physical memory region (SMRAM) within that address space. While in SMM, the processor executes SMI handler code to perform operations such as powering down unused disk drives or monitors, executing proprietary code, or placing the whole system in a suspended state. When the SMI handler has completed its operations, it executes a resume (RSM) instruction.

To enter SMM a SMI (System Management Interrupt) must be generated

The only way to enter SMM is by signaling an SMI through the SMI# pin on the processor or through an SMI message received through the APIC bus.

While the I in SMI stand for Interrupt asserting the SMI# won't generate an interrupt in the sense shown above.

SMI was introduced with a later version of the 386, right when protected mode was becoming popular.
It has been used to translate hardware interface transparently, for example, Intel chipsets can be programmed to generate an SMI when ports 60h-64h are accessed in order to give legacy support for USB devices.
Those are the standard PS2 ports for dealing with mouse and keyboard; the SMM code transparently read the value of the ports 60h-64h and appropriately translates those accesses to USB accesses.

With the advent of Pentium, Intel introduced the LAPIC (Local Advanced Programmable Interrupt Controller), the INTR and NMI are gone, substituted by the LINT0 and LINT1 (Local Interrupt).
LINT0 and LINT1 are programmable pins, from Chapter 10 of manual 2 from Intel: 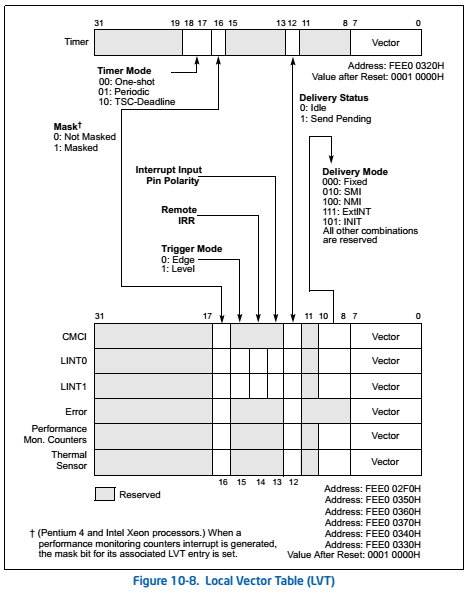 At reset LINT0 is configured as INTR and LINT1 as NMI for backwards compatibility.

The complexity of routing interrupts and giving them a priority has been moved to hardware external to the CPU.
Every device or platform used a custom wiring, for example, PCI devices had their pins for interrupts crossed to minimise pollution. The advent of the IOAPIC with its hierarchical layout and of the [MSI]s(https://en.wikipedia.org/wiki/Message_Signaled_Interrupts) added more functional layers in the handling of interrupts.

Meanwhile, it was recognised that leaving the OS out of management decision by using the SMI was not a good idea:
an OS can disable or throttle a processor or a device, can report, log, shutdown.

The complexity of dealing with hardware without a standardised informative support from the firmware and the need to make the OS part of the management procedures culminated in the ACPI specifications.

Instead of relying on OS invisible modes like SMM, ACPI defines an interpretable byte-code (the AML).
The OS is responsible for executing, firmware developers are responsible for writing it.

The ACPI designers decided to use a normal interrupt, the SCI (System Control Interrupt), to request the attention of the OS, this interrupt can be signalled in any way but must be handled by the OS and not by the firmware.

The SCI is a normal interrupt, its vector (read: number) is reported in one of the ACPI table/structure.
The SCI vector can be configured by programming the chipset, a common value used the last time I read some datasheet/table was 9.

Upon an SCI the OS typically determines the source of such interrupt and perform the appropriate action, usually this involves executing some AML code in the process.

An hardware interrupt can be "generated" by software in two ways, depending on the meaning of "generated":

Note that the OS usually expect an hardware interrupt to be generated under specific hardware status, if no cause can be found the interrupt is usually classified as spurious, not all OS/handler deal well with spurious interrupts.

Chapter 6.9 of the 3rd Intel manual reports the interrupts priorities

Thus, considering that a SCI is just a normal interrupt the ordering is

Note that this order is used when multiple interrupts occur at the "same" time.
While serving an NMI or while in SMI is possible to enable and serve normal / SCI interrupts.

Not the answer you're looking for? Browse other questions tagged x86 interrupt interrupt-handling or ask your own question.

1
How SCI - System Control Interrupt vector is defined?
0
Different ways to to trigger a SMI for a processor

166
What is the difference between Trap and Interrupt?
1
When to use Interrupt Gate or Trap Gate?
4
Inter Processor Interrupt usage
2
Hardware or software interrupt or exception by trap instruction?
1
What's the difference between Software-Generated Interrupt and Software-Generated Exception?
1
How SCI - System Control Interrupt vector is defined?
0
Registering custom interrupt handler for Intel PT
0
How cpu is aware of hardware interrupt?
0
how does the operating system treat few interrupts and keep processes going?