How to check when a VBA module was modified?

I have written a version control module. The AutoExec macro launches it whenever I, or one of the other maintainers log in. It looks for database objects that have been created or modified since the previous update, and then adds an entry to the Versions table and then opens the table (filtered to the last record) so I can type in a summary of the changes I performed.

It is working great for Tables, Queries, Forms, Macros, etc but I cannot get it to work correctly for modules.

I have found two different properties that suggest a Last Modified date ...

The first one (CurrentDB) always shows "LastUpdated" as the Date it was created, unless you modify the description of the module or something in the interface. This tells me that this property is purely for the container object - not what's in it.

The second one works a lot better. It accurately shows the date when I modify and compile/save the module. The only problem is that when you save or compile a module, it saves / compiles ALL the modules again, and therefore sets the DateModified field to the same date across the board. It kind of defeats the purpose of having the DateModified property on the individual modules doesn't it?

So my next course of action is going to a bit more drastic. I am thinking I will need to maintain a list of all the modules, and count the lines of code in each module using VBA Extensions. Then, if the lines of code differs from what the list has recorded - then I know that the module has been modified - I just won't know when, other than "since the last time I checked"

Does anyone have a better approach? I'd rather not do my next course of action because I can see it noticeably affecting database performance (in the bad kind of way)

To get the text from a module using VBE Extensibility, you can do

And then you can use the following modified MD5 hash function from this answer as below, you can take the hash of each module to store it, then compare it in your AutoExec.

The VBIDE API makes it excruciatingly painful - as you've noticed.

Rubberduck doesn't deal with host-specific components yet (e.g. tables, queries, etc.), but its parser does a pretty good job at telling whether a module was modified since the last parse.

"Modified since last time I checked" is really all you need to know. You can't rely on line counts though, because this:

Would be the same as this:

And obviously you'd want that change to be picked up and tracked. Comparing every character on every single line of code would work, but there's a much faster way.

The general idea is to grab a CodeModule's contents, hash it, and then compare against the previous content hash - if anything was modified, we're looking at a "dirty" module. It's C#, and I don't know if there's a COM library that can readily hash a string from VBA, but worst-case you could compile a little utility DLL in .NET that exposes a COM-visible function that takes a String and returns a hash for it, shouldn't be too complicated.

Here's the relevant code from Rubberduck.VBEditor.SafeComWrappers.VBA.CodeModule, if it's any help:

Here Target is a Microsoft.Vbe.Interop.CodeModule object - if you're in VBA land then that's simply a CodeModule, from the VBA Extensibility library; something like this:

So yeah, your "drastic" solution is pretty much the only reliable way to go about it. Few things to keep in mind:

I'd go with a Dictionary that stores the modules' object pointer as a key, and their content hash as a value.

That said as the administrator of the Rubberduck project, I'd much rather see you join us and help us integrate full-featured source control (i.e. with host-specific features) directly into the VBE =) 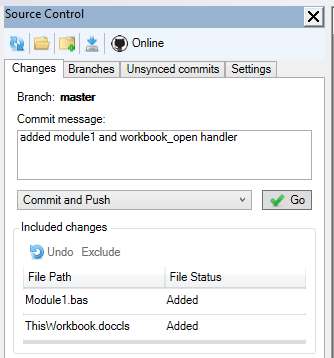 I thought I would add the final code I came up with for a hash / checksum generation module, since that was really the piece I was missing. Credit to the @BlackHawk answer for filling in the gap by showing that you can late bind .NET classes - that's going to open up a lot of possibilities for me now.

I have finished writing my Version checker. There were a few caveats that I encountered that made it hard to rely on the LastUpdated date.

For Tables I built a string that was a concatenation of the table name, all field names with their size and data types. I then computed the hash on those.

For Queries I simply computed the hash on the SQL.

For Modules, Macros, Forms, and Reports I used the Application.SaveAsText to save it to a temporary file. I then read that file in to a string and computed a hash on it. For Forms and Reports I didn't start adding to the string until the "Begin" line passed.

Seems to be working now and I haven't come across any situations where it would prompt for a version revision when something wasn't actually changed.

For calculating a checksum or hash, I built a Class Module named CryptoHash. Here is the full source below. I optimized the Bytes Array to Hex String conversion to be quicker.

Not the answer you're looking for? Browse other questions tagged vba ms-access access-vba or ask your own question.

7
How to get the MD5 hex hash for a file using VBA?

1
Access VBA Error 2486 DoCmd.Save
471
Is there a way to crack the password on an Excel VBA Project?
0
Why could this process have crashed?
518
How to avoid using Select in Excel VBA
0
Multiple records from a join in one record
0
Is it possible to add an XML “log” using CustomXMLParts in Excel VBA?
2
Error 2115: Macro/function set to BeforeUpdate/ValidationRule is preventing {pgm} from saving data in the field
0
Importing text files with the filename included