How do I import the javax.servlet / jakarta.servlet API in my Eclipse project?

You also need to ensure that you already have a servletcontainer installed on your machine which implements at least the same Servlet API version as the servletcontainer in the production environment, for example Apache Tomcat, RedHat WildFly, Eclipse GlassFish, etc. Usually, just downloading the ZIP file and extracting it is sufficient. In case of Tomcat, do not download the EXE format, that's only for Windows based production environments. See also a.o. Several ports (8005, 8080, 8009) required by Tomcat Server at localhost are already in use.

A servletcontainer is a concrete implementation of the Servlet API. Also note that for example WildFly and GlassFish are more than just a servletcontainer, they also support JSF (Faces), EJB (Enterprise Beans), JPA (Persistence) and all other Jakarta EE fanciness. See also a.o. What exactly is Java EE?

Ensure that you're using the right Servlet package

The javax.* package has been renamed to jakarta.* package since Servlet API version 5.0 which is part of Jakarta EE 9 (Tomcat 10, TomEE 9, WildFly 22 Preview, GlassFish 6, Payara 6, Liberty 22, etc). So if you're targeting these server versions or newer, then you need to replace

in order to get it to compile, else you might risk to face this build error

The superclass "javax.servlet.http.HttpServlet" was not found on the Java Build Path

Integrate Server in Eclipse and associate it with Project

Once having installed both Eclipse for Enterprise Java and a servletcontainer on your machine, do the following steps in Eclipse:

You should in any case not have the need to fiddle around in the Build Path property of the project. You should above all never manually copy/download/move/include the individual servletcontainer-specific libraries like servlet-api.jar, jsp-api.jar, el-api.jar, j2ee.jar, javaee.jar, etc. It would only lead to future portability, compatibility, classpath and maintainability troubles, because your webapp would not work when it's deployed to a servletcontainer of a different make/version than where those libraries are originally obtained from.

In case you're using Maven, you need to make absolutely sure that servletcontainer-specific libraries which are already provided by the target runtime are marked as <scope>provided</scope>. You can find examples of proper pom.xml dependency declarations for Tomcat 10+, Tomcat 9-, JEE 9+ and JEE 8- in this answer: How to properly configure Jakarta EE libraries in Maven pom.xml for Tomcat?

Here are some typical exceptions which you can get when you litter the /WEB-INF/lib or even /JRE/lib, /JRE/lib/ext, etc with servletcontainer-specific libraries in a careless attempt to fix the compilation errors: 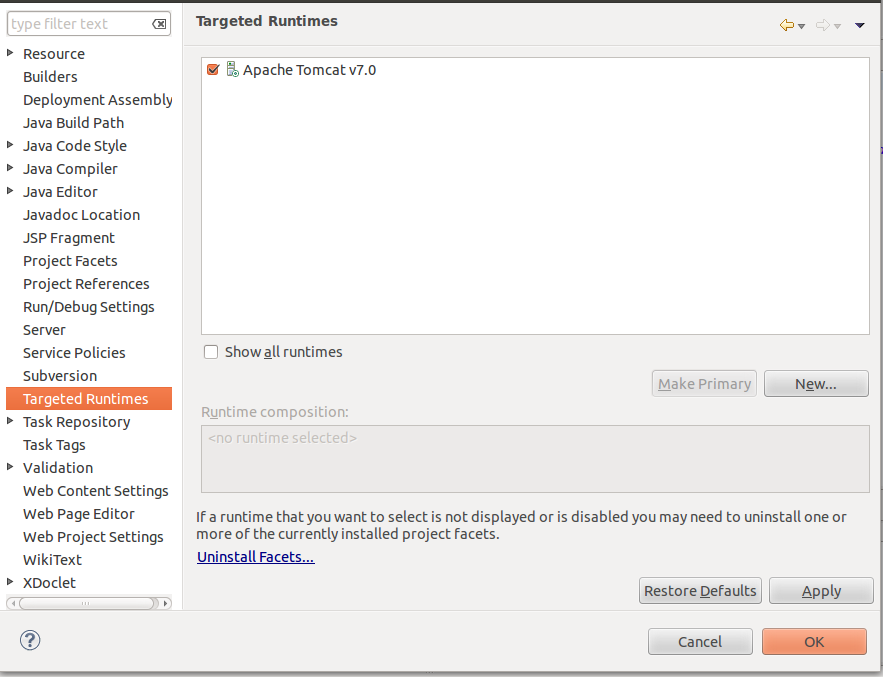 check on Apache Tomcat v7.0 under Targeted Runtime and it works.

Include servlet-api.jar from your server lib folder. 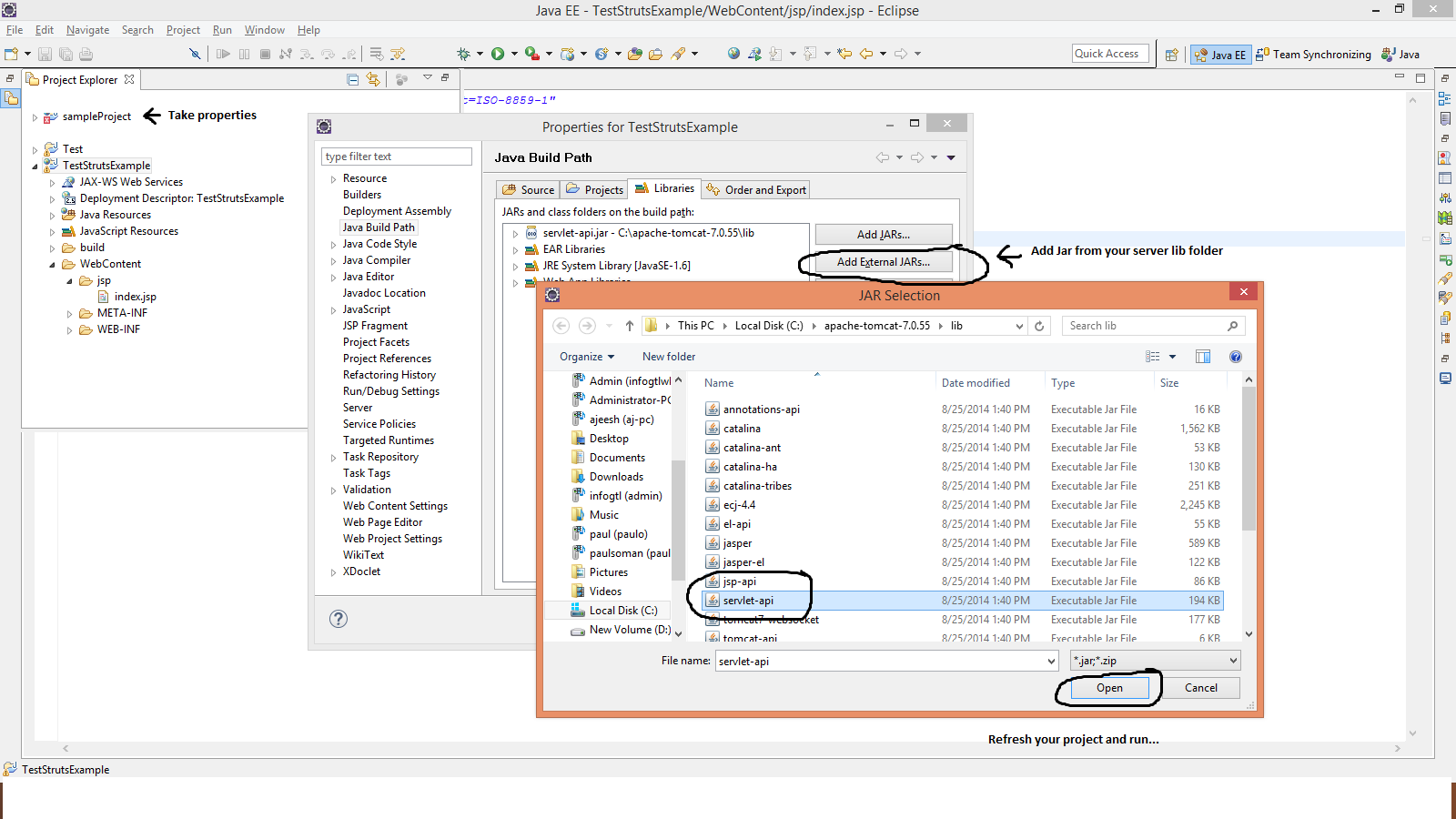 Add javax.servlet dependency in pom.xml. Your problem will be resolved.

you can simply copy the servlet-api.jar and copy that jar files into lib folder, which is in WEB-INF. then just clean and built your project, your errors will be solved.

you can directly add jar files to library by using following steps.

I know this is an old post. However, I observed another instance where in the project already has Tomcat added but we still get this error. Did this to resolve that:
Alt + Enter
Project Facets
On the right, next to details, is another tab "Runtimes". The installed tomcat server will be listed there. Select it.
Save the configuration and DONE!

This, of course, works only if you have added the servlet-api.jar to Eclipse build path. Typically your application server (e.g Tomcat) will have the right jar file.

I was getting a null pointer exception during project creation related to "Dynamic Web Module".

To get the project to compile (that is, to javax.servlet to import successfully) I had to go to project's Properties, pick Project Facets in the sidebar, tick Dynamic Web Module and click Apply.

In my case, when I went to the Targetted Runtimes, screen, Tomcat 7 was not listed (disabled) despite being installed.

To fix, I had to go to Preferences->Server->Runtime Environments then uninstall and reinstall Tomcat 7.

Many of us develop in Eclipse via a Maven project. If so, you can include Tomcat dependencies in Maven via the tomcat-servlet-api and tomcat-jsp-api jars. One exists for each version of Tomcat. Usually adding these with scope provided to your POM is sufficient. This will keep your build more portable.

If you upgrade Tomcat in the future, you simply update the version of these jars as well.

This could be also the reason. i have come up with following pom.xml.

The unresolved issue was due to exclusion of spring-boot-starter-tomcat. Just remove <exclusions>...</exclusions> dependency it will ressolve issue, but make sure doing this will also exclude the embedded tomcat server.

If you need embedded tomcat server too you can add same dependency with compile scope.

I would prefer to use the exact classes that my application is going to use rather than one provided by Eclipse (when I am feeling like a paranoid developer).

Another solution would be to use Eclipse "Configure Build Path" > Libraries > Add External Jars, and add servlet api of whatever Container one chooses to use.

And follow @kaustav datta's solution when using ant to build - have a property like tomcat.home or weblogic.home. However it introduces another constraint that the developer must install Weblogic on his/her local machine if weblogic is being used ! Any other cleaner solution?

First get the local tomcat instance downloaded/installed on your machine. Assume we installed tomcat v8.5.

Now create your dynamic web project and we see the import javax.servlet cannot be resolved issue. Resolve this by following below.

All Errors will be gone.

541
How can I get Eclipse to show .* files?
4612
How do I read / convert an InputStream into a String in Java?
1298
How can you speed up Eclipse?
2821
How can I create an executable/runnable JAR with dependencies using Maven?
1127
R cannot be resolved - Android error
2027
How do I break out of nested loops in Java?
1301
'Must Override a Superclass Method' Errors after importing a project into Eclipse
1982
"Debug certificate expired" error in Eclipse Android plugins
707
Eclipse HotKey: how to switch between tabs?
26868
Why is processing a sorted array faster than processing an unsorted array?