Hi I have been shifted from VS 2013 to 2015 presently. So I am not too much familiar with in depth specifications.

I like VS 2015 as it allows me to evaluate lambda expressions and also it allow to me to change values runtime.

In some apps (winforms tested only) I am able to edit code while debugging and yes latest code is executed always i.e I don't need to stop and run the program again and againe. Yes it is very excellent feature.

But in case of my first experience at controller in MVC I am unable to edit code and it shows me multiple reasons behind this. 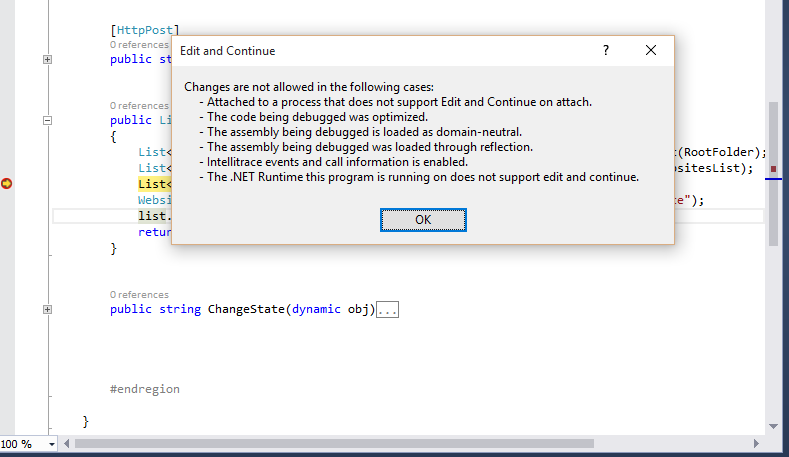 Can someone explain in what scenarios I can add/delete code while debugging?

In your visual studio go to Tools->Options-> expand debugging -> select Edit and continue and then check Enable edit and continue. here is image of that: see screenshot

You normally cannot edit and continue if you attached to an already running process which maybe your case if you are attached to a running MVC web project. If something was load using Reflection you will not be able to edit it as well.

I have also seen sometimes a similar message appearing during debug. I found the following from MSDN regarding code changes during debugging:

So, after alot of R&D i came to know that Edit and continue is NOT available for Asp.net yet. It would be released in the final version of Visual studio 15.

Not the answer you're looking for? Browse other questions tagged c# visual-studio visual-studio-2015 compiler-warnings or ask your own question.