What does the git index contain EXACTLY?

What does the Git index exactly contain, and what command can I use to view the content of the index?

Thanks for all your answers. I know that the index acts as a staging area, and what is committed is in the index rather than the working tree. I am just curious about what an index object consists of. I guess it might be a list of filename/directory names, SHA-1 pairs, a kind of virtual tree maybe?

Is there, in Git terminology, any plumbing command that I can use to list the contents of the index?

The Git book contains an article on what an index includes:

The index is a binary file (generally kept in .git/index) containing a sorted list of path names, each with permissions and the SHA1 of a blob object; git ls-files can show you the contents of the index:

The Racy git problem gives some more details on that structure:

The index is one of the most important data structures in git.
It represents a virtual working tree state by recording list of paths and their object names and serves as a staging area to write out the next tree object to be committed.
The state is "virtual" in the sense that it does not necessarily have to, and often does not, match the files in the working tree. 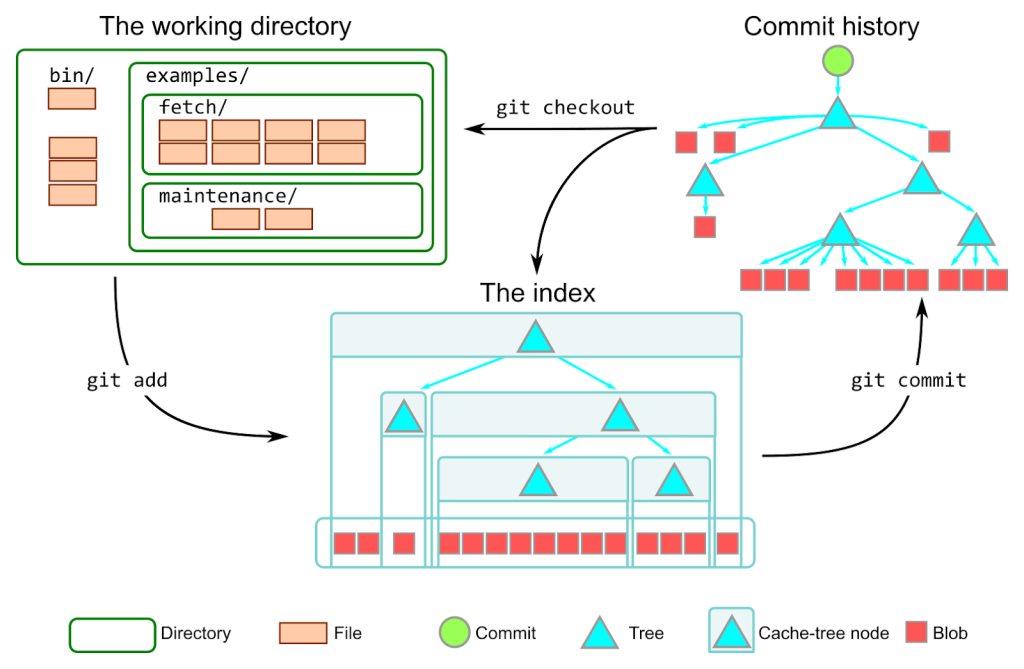 The Git index is a critical data structure in Git. It serves as the “staging area” between the files you have on your filesystem and your commit history.

The Git index file has the following format

All binary numbers are in network byte order.
Version 2 is described here unless stated otherwise.

If the index is the place where the next commit is prepared, why doesn't "git ls-files -s" return nothing after commit?

That list (of element tracked) is initialized with the content of a commit.
When you switch branch, the index content is reset to the commit referenced by the branch you just switched to.

This patch enables addressing the CPU cost of loading the index by adding additional data to the index that will allow us to efficiently multi- thread the loading and conversion of cache entries.

It accomplishes this by adding an (optional) index extension that is a table of offsets to blocks of cache entries in the index file.

To make this work for V4 indexes, when writing the cache entries, it periodically"resets" the prefix-compression by encoding the current entry as if the path name for the previous entry is completely different and saves the offset of that entry in the IEOT.
Basically, with V4 indexes, it generates offsets into blocks of prefix-compressed entries.

With the new index.threads config setting, the index loading is now faster.

The load_cache_entries_threaded() function takes a src_offset parameter that it doesn't use. This has been there since its inception in 77ff112 (read-cache: load cache entries on worker threads, 2018-10-10, Git v2.20.0-rc0).

Digging on the mailing list, that parameter was part of an earlier iteration of the series, but became unnecessary when the code switched to using the IEOT extension.

All binary numbers are in network byte order.
In a repository using the traditional SHA-1, checksums and object IDs (object names) mentioned below are all computed using SHA-1.
Similarly, in SHA-256 repositories, these values are computed using SHA-256.

I've decided to do a little testing to better understand the format and research some of the fields in more detail.

I have marked points which I'm not sure / haven't found with TODO: please feel free to complement those points.

As others mentioned, the index is stored under .git/index, not as a standard tree object, and its format is binary and documented at: https://github.com/git/git/blob/master/Documentation/technical/index-format.txt

The major structs that define the index are at cache.h, because the index is a cache for creating commits.

When we start a test repository with:

And if we get the content of the only object:

We get a. This indicates that:

Now let's look at the index itself:

Next we will conclude:

Next starts a list of index entries, defined by struct cache_entry Here we have just one. It contains:

Then comes a 00: 1-8 bytes of zero padding so that the path will be null-terminated and the index will end in a multiple of 8 bytes. This only happens before index version 4.

No extensions were used. Git knows this because there would not be enough space left in the file for the checksum.

To see what is inside the index, issue the command:

When you run git status, you can see which files are staged (currently in your index), which are modified but not yet staged, and which are completely untracked.

You can read this. A Google search throws up many links, which should be fairly self sufficient.

Git index is a binary file (generally kept in .git/index) containing a sorted list of path names, each with permissions and the SHA1 of a blob object;

git ls-files can show you the contents of the index. Please note that words index, stage, and cache are the same thing in Git: they are used interchangeably. 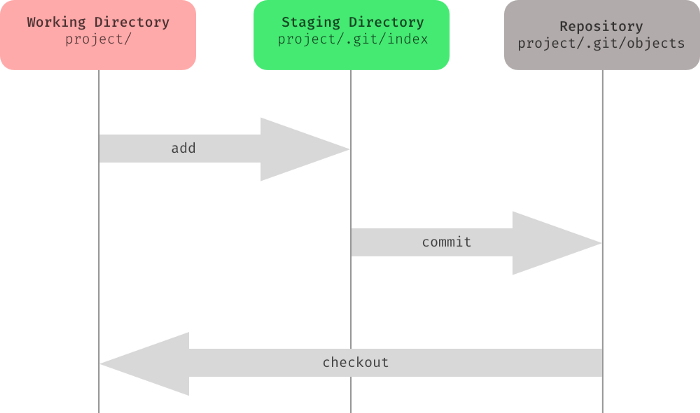 "If you git add, then a stage 0 is added to the index for the path, and Git will know that the conflict has been marked as solved. TODO: check this."

Details on the numerical representation of the various stages, in this case a file with conflict.

Here is what you exactly needed, use this command.

Just wanted to put git ls-tree in the ring.

The index is one of the most important data structures in git.
It represents a virtual working tree state by recording list of paths and their object names and serves as a staging area to write out the next tree object to be committed.
The state is "virtual" in the sense that it does not necessarily have to, and often does not, match the files in the working tree.

Would it be true to say git ls-tree tells me exactly what working files/objects should be present if I checked out a special commit? What kind of tree do we speak of in the context of ls-tree?

3
What exactly is git index in technical point of view
187
Git 'fatal: Unable to write new index file'
241
Getting a fatal error in git for multiple stage entries
144
What does tree-ish mean in Git?
93
Git equivalents of most common Mercurial commands?
72
Git is really slow for 100,000 objects. Any fixes?
61
Is the git binary diff algorithm (delta storage) standardized?
55
What's the difference between the index, cached, and staged in git?
22
What is the file format of a git commit object data structure?
18
How to view git objects and index without using git
See more linked questions

7881
How do I remove local (untracked) files from the current Git working tree?
3675
View the change history of a file using Git versioning
13508
What is the difference between 'git pull' and 'git fetch'?
25302
How do I undo the most recent local commits in Git?
2505
How do I show the changes which have been staged?
6225
Move the most recent commit(s) to a new branch with Git
5755
How do I change the URI (URL) for a remote Git repository?
5190
How to determine the URL that a local Git repository was originally cloned from
1728
How can I reconcile detached HEAD with master/origin?
3129
What does cherry-picking a commit with Git mean?