I have a dataframe with observed and modelled data, and I would like to calculate the R2 value. I expected there to be a function I could call for this, but can't locate one. I know I can write my own and apply it, but am I missing something obvious? I want something like

You need a little statistical knowledge to see this. R squared between two vectors is just the square of their correlation. So you can define you function as:

Sandipan's answer will return you exactly the same result (see the following proof), but as it stands it appears more readable (due to the evident $r.squared).

Let's do the statistics 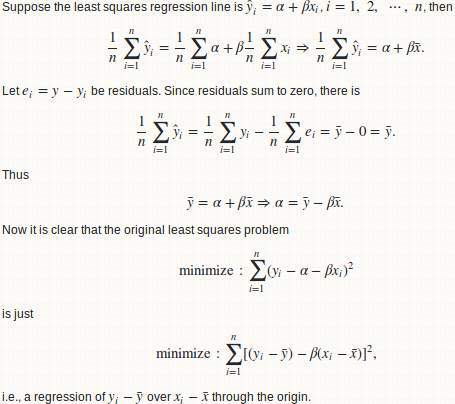 R squared between two arbitrary vectors x and y (of the same length) is just a goodness measure of their linear relationship. Think twice!! R squared between x + a and y + b are identical for any constant shift a and b. So it is a weak or even useless measure on "goodness of prediction". Use MSE or RMSE instead:

The R squared is reported by summary functions associated with regression functions. But only when such an estimate is statistically justified.

R squared can be a (but not the best) measure of "goodness of fit". But there is no justification that it can measure the goodness of out-of-sample prediction. If you split your data into training and testing parts and fit a regression model on the training one, you can get a valid R squared value on training part, but you can't legitimately compute an R squared on the test part. Some people did this, but I don't agree with it.

The R squared between those two vectors is 1. Yes of course, one is just a linear rescaling of the other so they have a perfect linear relationship. But, do you really think that the preds is a good prediction on actual??

Thanks for your comments 1, 2 and your answer of details.

You probably misunderstood the procedure. Given two vectors x and y, we first fit a regression line y ~ x then compute regression sum of squares and total sum of squares. It looks like you skip this regression step and go straight to the sum of square computation. That is false, since the partition of sum of squares does not hold and you can't compute R squared in a consistent way.

As you demonstrated, this is just one way for computing R squared:

But there is another:

Also, your formula can give a negative value (the proper value should be 1 as mentioned above in the Warning section).

I had never expected that this answer could eventually be so long when I posted my initial answer 2 years ago. However, given the high views of this thread, I feel obliged to add more statistical details and discussions. I don't want to mislead people that just because they can compute an R squared so easily, they can use R squared everywhere.

and have to be accessed from the vector like this

However, this is using the correlation squared approximation for r-squared as mentioned in another answer. I'm not sure why Max Kuhn didn't just use the conventional 1-SSE/SST.

caret also has an R2() method, although it's hard to find in the documentation.

The way to implement the normal coefficient of determination equation is:

Not too bad to code by hand of course, but why isn't there a function for it in a language primarily made for statistics? I'm thinking I must be missing the implementation of R^2 somewhere, or no one cares enough about it to implement it. Most of the implementations, like this one, seem to be for generalized linear models.

You can also use the summary for linear models:

Here is the simplest solution based on [https://en.wikipedia.org/wiki/Coefficient_of_determination]

Not sure why this isn't implemented directly in R, but this answer is essentially the same as Andrii's and Wordsforthewise, I just turned into a function for the sake of convenience if somebody uses it a lot like me.

I am use the function MLmetrics::R2_Score from the packages MLmetrics, to compute R2 it uses the vanilla 1-(RSS/TSS) formula.

Not the answer you're looking for? Browse other questions tagged r function statistics or ask your own question.

22
How to obtain RMSE out of lm result?
29
Is there a faster lm function
10
R - Calculate Test MSE given a trained model from a training set and a test set
13
Fast pairwise simple linear regression between variables in a data frame
2
how to calculate correlation between one row and remaining row of a data frame
2
Unable to get R-squared for test dataset
3
Separate B-spline between knots and compare goodness of fit on each piece
1
R squared as measure in Excel Power Pivot
2
Validate Accuracy of Test Data
1
R-squared in lm() for zero-intercept model
See more linked questions

2075
What's the difference between a method and a function?
985
How to get a function name as a string?
7461
var functionName = function() {} vs function functionName() {}
2587
Set a default parameter value for a JavaScript function
1127
Grouping functions (tapply, by, aggregate) and the *apply family
1410
What does the exclamation mark do before the function?
1308
Passing parameters to a Bash function
371
How do I define a function with optional arguments?
191
Call apply-like function on each row of dataframe with multiple arguments from each row
647
How can I view the source code for a function?