What is difference between Lightsail and EC2? [closed]

The community reviewed whether to reopen this question last year and left it closed:

Recently Amazon launched Lightsail. Is there any difference between them? If yes, then what's the difference? Are Lightsail instances more powerful than EC2?

Testing¹ reveals that Lightsail instances in fact are EC2 instances, from the t2 class of burstable instances.

EC2, of course, has many more instance families and classes other than the t2, almost all of which are more "powerful" (or better equipped for certain tasks) than these, but also much more expensive. But for meaningful comparisons, the 512 MiB Lightsail instance appears to be completely equivalent in specifications to the similarly-priced t2.nano, the 1GiB is a t2.micro, the 2 GiB is a t2.small, etc.

Lightsail is a lightweight, simplified product offering -- hard disks are fixed size EBS SSD volumes, instances are still billable when stopped, security group rules are much less flexible, and only a very limited subset of EC2 features and options are accessible.

It also has a dramatically simplified console, and even though the machines run in EC2, you can't see them in the EC2 section of the AWS console. The instances run in a special VPC, but this aspect is also provisioned automatically, and invisible in the console. Lightsail supports optionally peering this hidden VPC with your default VPC in the same AWS region, allowing Lightsail instances to access services like EC2 and RDS in the default VPC within the same AWS account.²

Bandwidth is unlimited, but of course free bandwidth is not -- however, Lightsail instances do include a significant monthly bandwidth allowance before any bandwidth-related charges apply.³ Lightsail also has a simplified interface to Route 53 with limited functionality.

But if those sound like drawbacks, they aren't. The point of Lightsail seems to be simplicity. The flexibility of EC2 (and much of AWS) leads inevitably to complexity. The target market for Lightsail appears to be those who "just want a simple VPS" without having to navigate the myriad options available in AWS services like EC2, EBS, VPC, and Route 53. There is virtually no learning curve, here. You don't even technically need to know how to use SSH with a private key -- the Lightsail console even has a built-in SSH client -- but there is no requirement that you use it. You can access these instances normally, with a standard SSH client.

²The Lightsail docs are not explicit about the fact that peering only works with your Default VPC, but this appears to be the case. If your AWS account was created in 2013 or before, then you may not actually have a VPC with the "Default VPC" designation. This can be resolved by submitting a support request, as I explained in Can't establish VPC peering connection from Amazon Lightsail (at Server Fault).

³The bandwidth allowance applies to both inbound and outbound traffic; after this total amount of traffic is exceeded, inbound traffic continues to be free, but outbound traffic becomes billable. See "What does data transfer cost?" in the Lightsail FAQ.

Lightsail VPSs are bundles of existing AWS products, offered through a significantly simplified interface. The difference is that Lightsail offers you a limited and fixed menu of options but with much greater ease of use. Other than the narrower scope of Lightsail in order to meet the requirements for simplicity and low cost, the underlying technology is the same.

The pre-defined bundles can be described:

It's worth reading through the Amazon EC2 T2 Instances documentation, particularly the CPU Credits section which describes the base and burst performance characteristics of the underlying instances.

Importantly, since your Lightsail instances run in VPC, you still have access to the full spectrum of AWS services, e.g. S3, RDS, and so on, as you would from any EC2 instance.

In lightsail a virtual machine, SSD-based storage, data transfer, DNS management, and a static IP are all offered as a package. Whereas in normal case you provision an EC2 instance and then setup the rest of these things.Also Bandwidth included in the price, no security groups to set up, no need to worry about EBS volumes sizing. 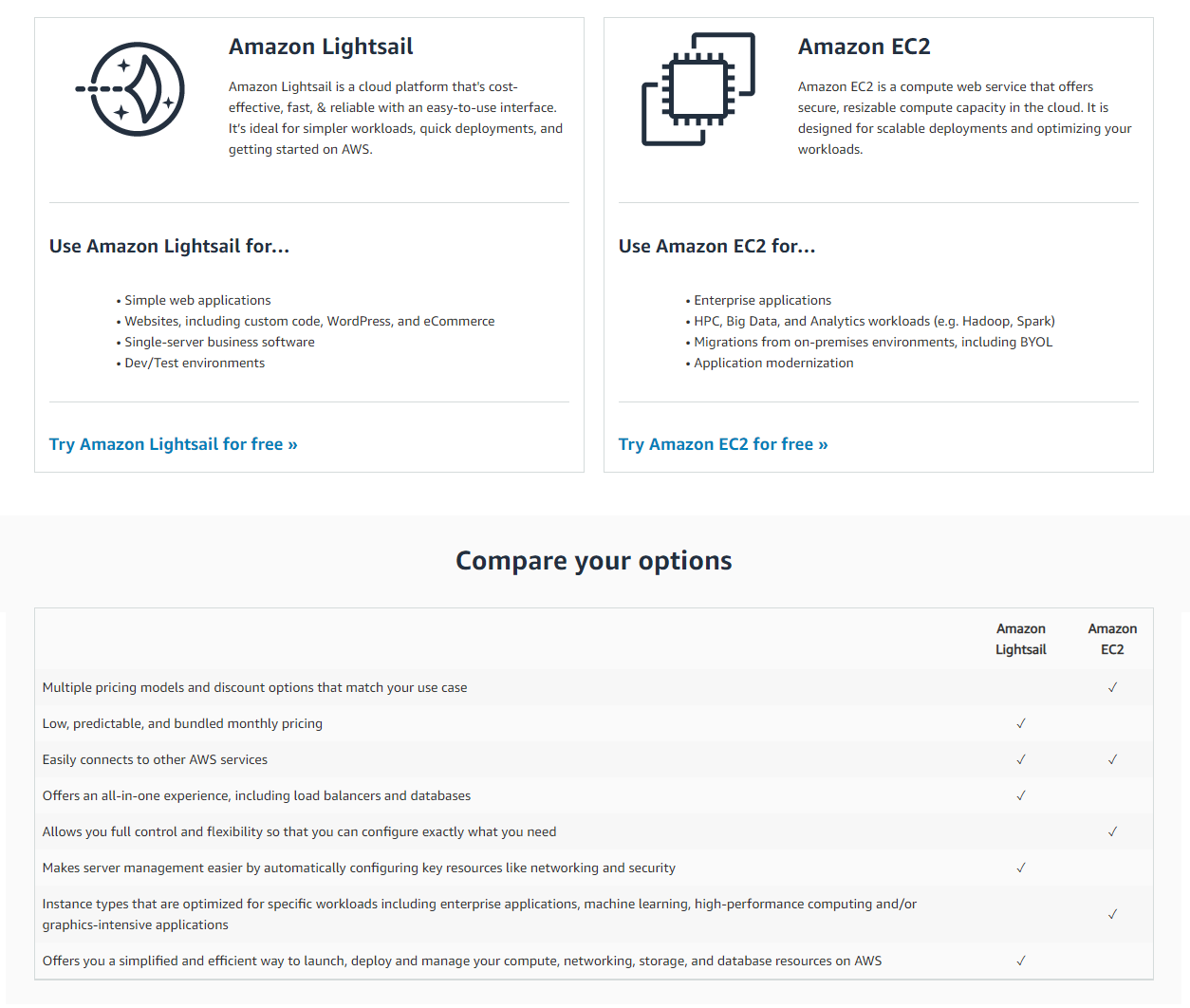 Amazon Lightsail – The Power of AWS, the Simplicity of a VPS https://aws.amazon.com/blogs/aws/amazon-lightsail-the-power-of-aws-the-simplicity-of-a-vps/

I think the lightsail as the name suggest is light weight and meant for initial development. For production sites and apps with high volume it simply becomes unavailable and hangs....It is just a sandbox to play with things. Further lack of support reduces its reliability. There should be an option to migrate to EC2, when u fully develop your apps or sites..So that with same minimum configuration you can migrate to scalable EC2..

2
AWS vs. Lightsail, what is the difference?
146
Why do we need private subnet in VPC?
15
Are Amazon Lightsail instances managed / automatically updated?
6
Are AWS Lightsail databases subject to burst performance?
1
How do I get the instance name of a Lightsail instance
0
Frozen trying to install Hyperledger composer-rest-server on AWS Lightsail