I am working on a node project which generates data using mongodb dataset-generator and I've added my data generation server code to AWS's Lambda which I've expose to AWS's api gateway.

So now the issue is that CloudFront timeout the request after 30 seconds. And the problem is that the computation I am doing cannot be break into multiple API hits. So can anyone from community can help me out here or can tell me some alternative which allows me to hit request which won't get timeout.

I believe I originally misinterpreted the nature of the problem you are experiencing.

I assumed, since you mentioned CloudFront, that you had explicitly configured CloudFront in front of your API Gateway endpoint.

It may be true that you didn't, since API Gateway implicitly uses services from "the AWS Edge Network" (a.k.a. CloudFront) to provide a portion of its service.

In fact, API Gateway also has a 30 second response timeout and Can Be Increased? is No. So the "CloudFront" timeout is essentially the same timeout as the one imposed by API Gateway.

This, of course, would have have precedence over any longer timeout on your Lambda function.

There isn't a simple and obvious workaround. This seems like a task that is outside the scope of the design of API Gateway.

One option -- which I personally tend to dislike when APIs force it on me -- is to require pagination. I really hate that... just give me the data, I can handle it... but it has its practical applications. If the request is for 1000000 rows, return rows 1 through 1000 and return a next_url that will fetch rows 1001 through 2000.

Another option is for the initial function to submit the request to a second lambda function, using asynchronous invocation, for processing, and return a redirect that will send the user to a new URL where the data can be fetched. Now, stick with me, because this solution sounds really horrible, but it's theoretically viable. The asynchronous function would do the work in the background, and store the response in S3. The URL where the data is fetched would be third lambda function that would poll the key in the S3 bucket where the data is to be stored, say once per second for 20 seconds. If the file shows up, it would pre-sign a URL for that location, and issue a final redirect to the browser with the signed URL as the Location. If the file does not show up, it would redirect the browser back to itself again so that polling would continue until the file shows up or the browser gets tired of the redirect loop.

Sketchy? Yes. Viable? Probably. Good idea? That's debatable... but it seems as if you are doing something that really is outside the fundamental design parameters of API Gateway, so either a fairly complex workaround is needed, of you'll want to implement this somewhere other than with API Gateway.

Of course, you could write your own "API Gateway" that runs on EC2 and invokes Lambda functions directly through the Lamdba API and returns results to the caller -- so Lambda still handles the work and the scaling, but you avoid the 30 second timeout. 30 seconds is a long time to wait for a web response.

I see that this is the old question but need to say that start from March 2017 it is possible to change an origin response timeout and keep-alive timeout. 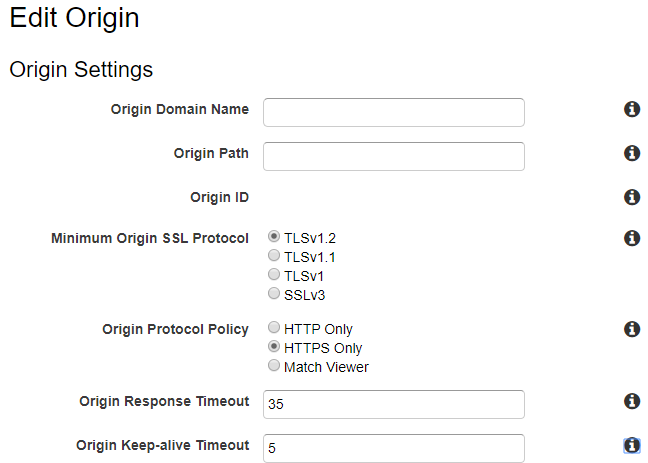 Not the answer you're looking for? Browse other questions tagged node.js amazon-web-services aws-lambda amazon-cloudfront or ask your own question.