How to draw a small graph with community structure in networkx

The graph has around 100 nodes, and the number of communities ranges from 5 to 20. Is there any way to draw the graph such that the nodes of the same community are close to each other?

I've tried to assign different communities different colors, but that does not work well in my application.

I've read this and this but did not find a good solution.

For small graph, I find the spring_layout pretty OK for drawing communities. If you need to highlight nodes (and their communities) I recommend you:

If you choose spring_layout you can additionally play around with the k argument (the documentation states: Increase this value to move nodes farther apart). Note that spring_layout can give different images for each time you run the code (this way you can run the code multiple times and save the image only when you're satisfied with the result).

In the following example I use a default graph (nx.karate_club_graph) in which I detect the communities automatically with the python-louvain package (imported as community). Node sized are defined with the node_size argument in nx.draw_networkx_nodes. The node colors depend on the community to which they belong -- I use the plt.cm.RdYlBu color map (see more color maps here). Note that you can also affect node sizes (and edges lengths) by defining a bigger or smaller image with figsize in plt.figure.

Output (I ran the code multiple times and choosed the "prettiest" image): 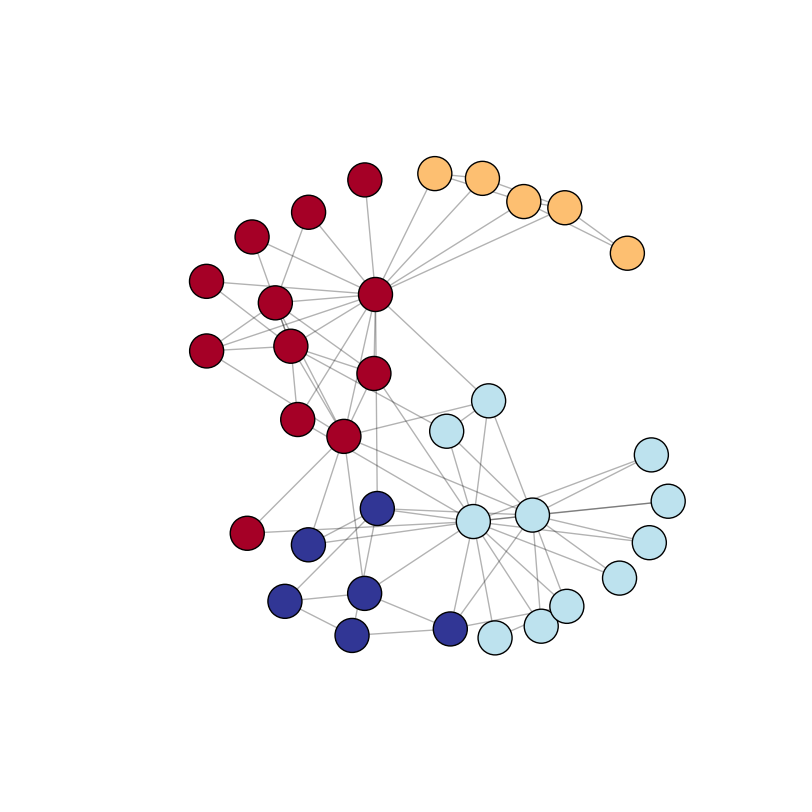 But what if you have a bigger graph with less obvious communities? Here is a more complicated graph with 100 nodes and 100 random edges (and thus random communities) but with the same drawing approach: 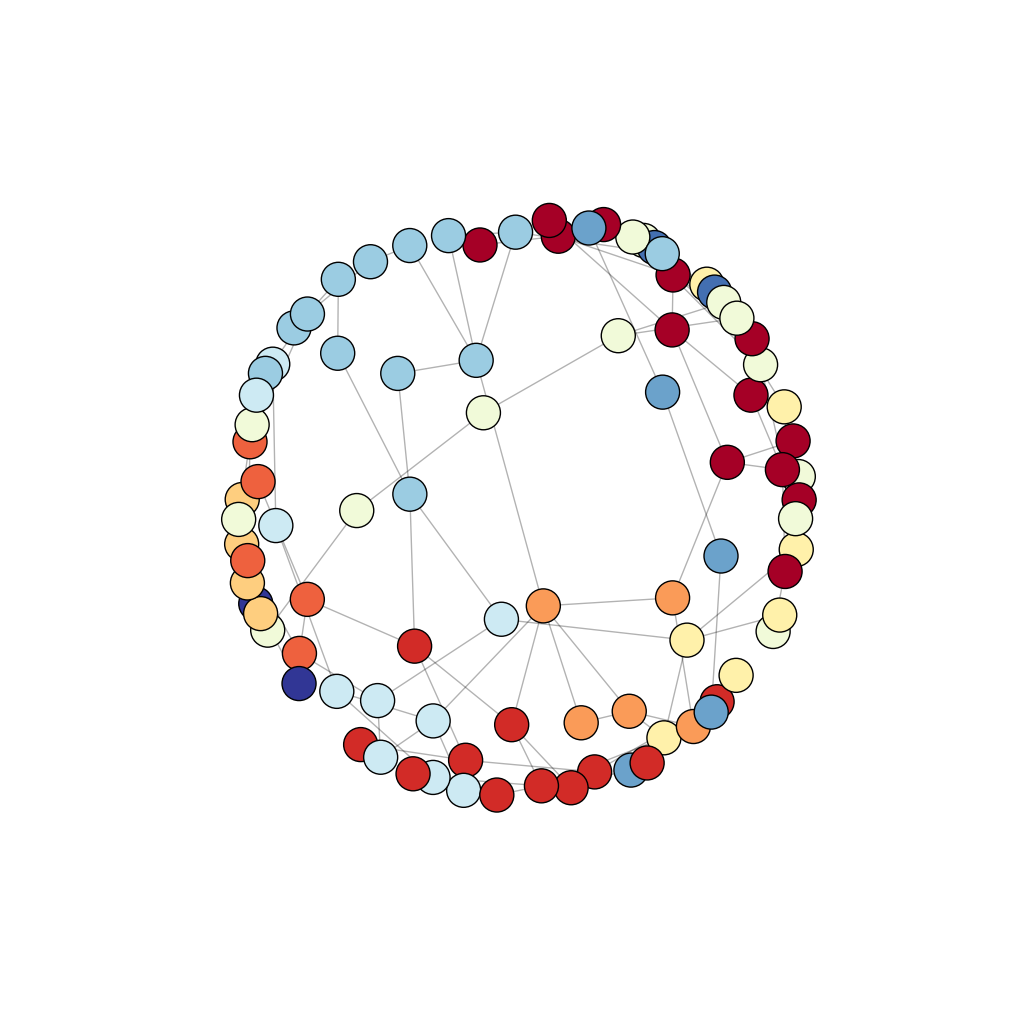 We see no clear communities in the image above. Here you have at least three choices:

If you choose the third option, you can have the nodes of one highlighted community bigger than other nodes (and of different color of course). You could also change the color and thickness of edges in that community (not shown in the example below).

Output (only the first community highlighted): 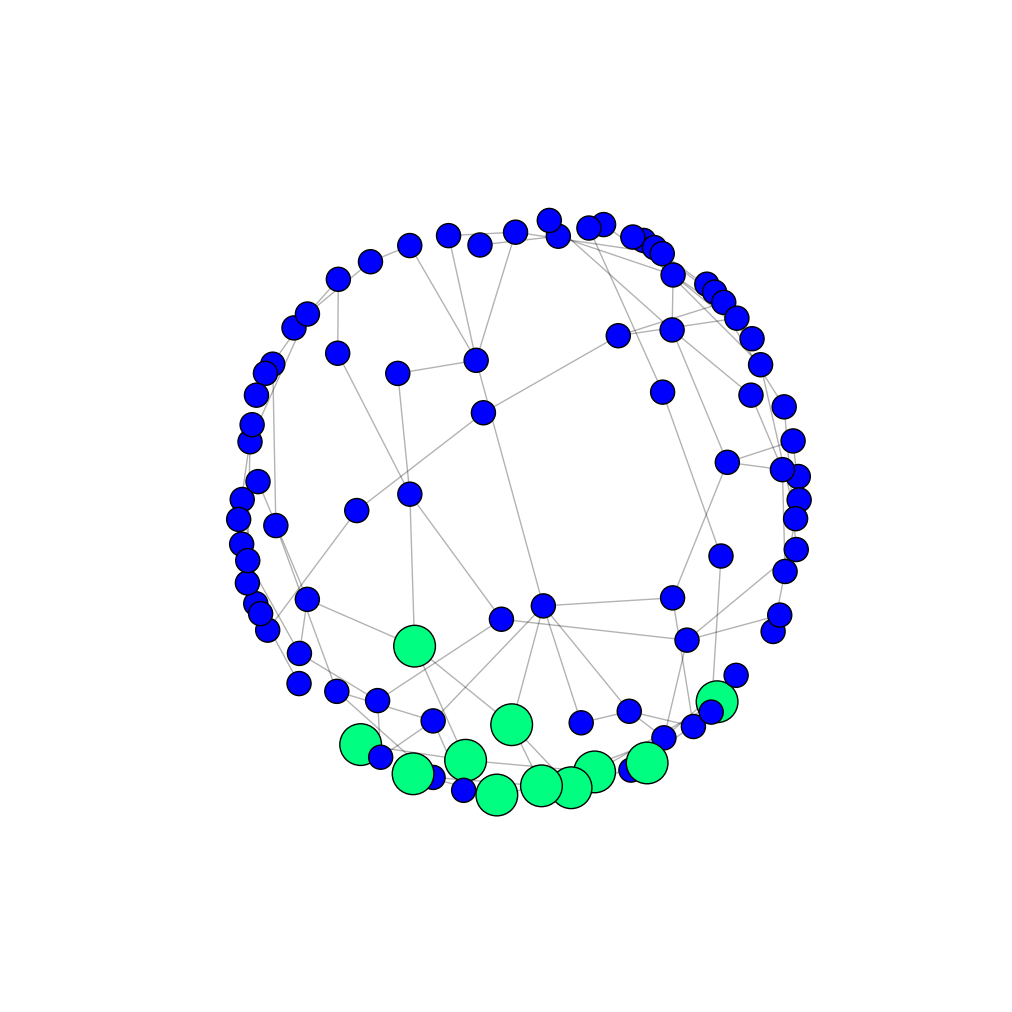 If you have multiple images for the same graph, I recommend that the nodes have the same positions in all of them (you'll need to have the same pos between drawings). That way the images are more comparable.

Not the answer you're looking for? Browse other questions tagged python data-mining networkx graph-visualization or ask your own question.

97
Is there a way to guarantee hierarchical output from NetworkX?
59
Improving Python NetworkX graph layout

585
"is" operator behaves unexpectedly with integers
2748
How do you change the size of figures drawn with Matplotlib?
659
Python progression path - From apprentice to guru
2438
How to upgrade all Python packages with pip
0
Detecting community with python and networkx
535
Error: " 'dict' object has no attribute 'iteritems' "
3
Community Detection Algorithms using NetworkX
1
How to draw specific communities from networkx while ignoring the other communities?