How to edit (customize) Color Themes in VS2017 Preview

has anyone figures out, how to change the color theme in VS2017.

I used a custom Theme in 2012 and later in 2013. I imported it with the Extension. But I was also able to Import the theme via registry to the Express Versions, where the Extension wasn't running.

In 2017 there is no Extenesion (yet!? - I hope it is coming, I can't stand that blue or black or White), and I didn't found the place in the registry.

The actual extension is now live for VS 2017. – vaindil

The official Visual Studio 2017 Color Theme Editor has arrived! I recommend using it instead of the hack below. Since the hacked version has some downsides that the official plugin does not have: it requires restarting visual studio when importing themes, plugin updates cause loosing themes, it doesn't define all colors that VS2017 uses.

Still, people might find use in hacking VSIX-files to get old Visual Studio plugins working. Therefore I leave the original answer below for reference.

Editing and saving themes is problematic, as pointed out by @RepoMan. The following work around allows you to edit a theme and save it:

If you're referring to one of the 3 inbuilt themes, this link from Microsoft explains how. The relevant bit is below:

Microsoft have also changed the format of the .vssettings file, so you can't manually import VS 2013 themes either.

I really hope you can change the theme in Visual Studio 2017 Community when it comes out.

Maybe this will help a little bit. You can at least edit the way the tooltip looks without any extensions/addons. Go to Tools->Options->Environment->Fonts and Colors. Under "Show settings for:" change the dropdown to "Environment". Note that it's easy to miss this: for some reason I never saw it until now. There's 3 options in there that will let you adjust the tooltip's border, background, and default font color. Note that you can't adjust all the font colors that might appear.

I have tried this with the final (non-RC) release of VS2017 that came out today. 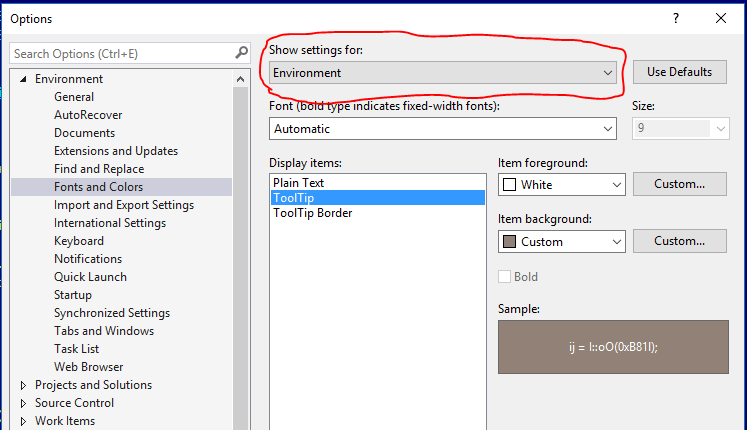 There is an easier way for using Color Theme Editor in Visual Studio 2017 with the help of an hacked version (created by Serban Var) that is available on this page. I use the following color settings for Solarized (Dark) Theme. Similarly, it is also possible to change the colors i.e. Operators, etc. for the themes you use via Tools → Options → Environment → Fonts and Colors.

Note : Please do not forger to save your currents settings before importing this settings. I used it without any problem and the only thing I need to change for Solarized Dark Theme is Operator and Item Background colors.

The color theme editor for VS 2017 was just released, no need for hacks anymore. Grab it here.

First of all choose Blue theme then convert it to Light and then choose Dark. By doing so you will get a Dark theme as you had in VS2013 or 2015.

Not the answer you're looking for? Browse other questions tagged visual-studio-2017 vs-color-theme-editor or ask your own question.