I want to know how the memory is being allocated in the following program:

Now, as far as my understanding goes, the following diagram describes how the memory allocation takes place: 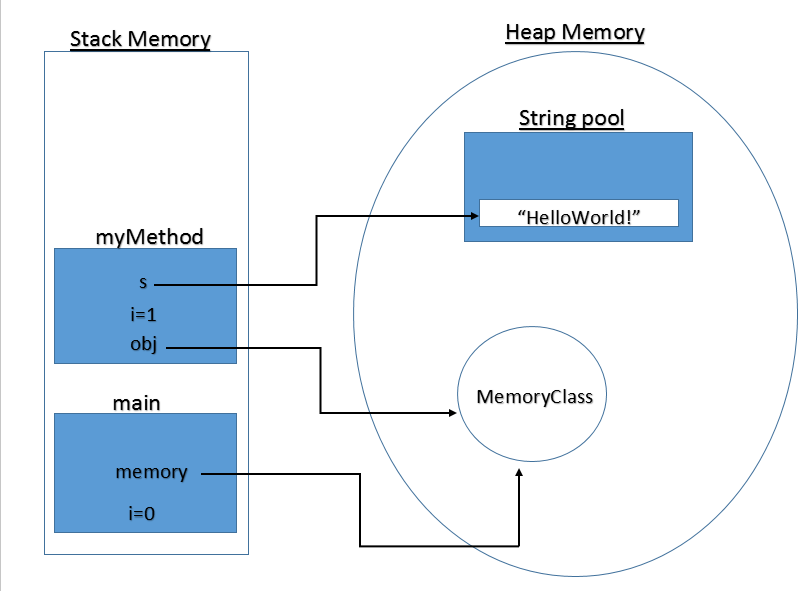 In the above diagram, memory,obj and s, which are in the stack memory, are actually the references to their "actual objects" which are placed inside the heap memory.
Here is the set of questions that come to my mind:

Where are the methods of s stored?

They are stored in the String class object; it is an object loaded by a ClassLoader object when String is first referenced in the program. All the implementations of the JVM that existed when I read about this last never deallocated the memory for a class object once it was loaded. It's on the heap.

Had I created another object of MemoryClass inside myMethod, would JVM allocate memory for the same methods again inside the stack memory?

No, methods and data for objects is kept separately, specifically because the JVM never needs more than one copy of the methods.

Would JVM free the memory allocated to myMethod as soon as it's execution is completed, if so, how would it manage the situation mentioned in question 2(only applicable if JVM allocates memory multiple times to the same method).

What would have been the case, if I had only declared s and did not initialize it, would JVM still allocate memory to all the methods of java.lang.String class,if so,why?

This depends on the JVM implementation, I think, and maybe the compiler. If you declare a variable and never use it, it is quite possible (and common) for the compiler to notice that there is no use for it and to not put it into the class file. If it isn't in the class file, it is never referenced, and therefore it and its methods are not loaded, etc. If the compiler puts it in anyway but it is never referenced, then the ClassLoader wouldn't have any reason to load it, but I'm a little vague on whether it would get loaded or not. Might depend on the JVM implementation; does it load things because there are variables of the class or only when they are referenced? How many ClassLoader algorithms can dance on the head of a 4-digit PIN?

I encourage you to read about the JVM and ClassLoaders and such; you will gain so much more by reading an explanation of how it works rather than poking at it with examples you can think up.

First things first: I am assuming your questions are coming out after reading this article (because over there I see a very similar diagram as yours) so I will not quote or highlight any of the points which are mentioned over there and will try to answer to your questions with points which were not so obvious in that post.

Reading to all your questions, my impression is that you are clear about how memory is allocated in stack and heap but have doubts about metadata of the classes i.e. where in the memory, methods of the classes would be stored and how they would be recycled. So, first let me try to explain JVM memory areas: 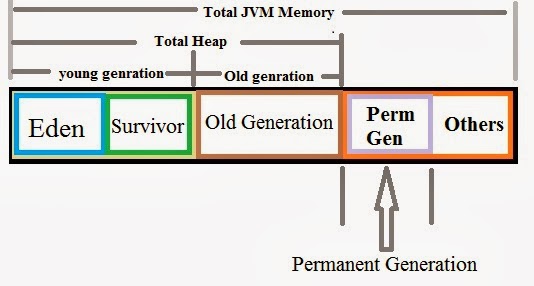 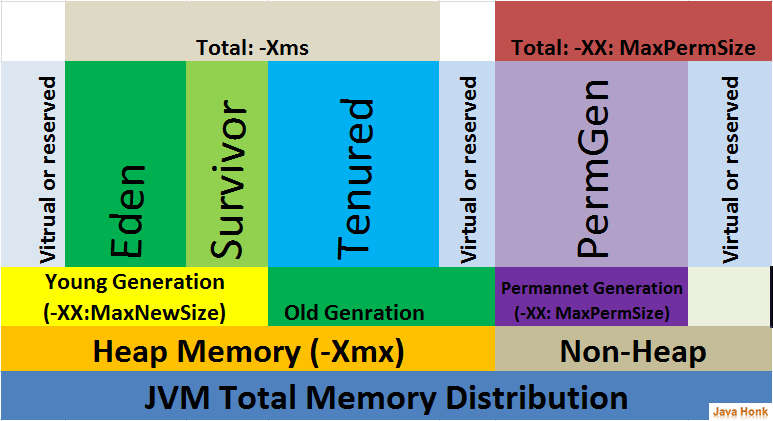 Now, as clear from the above diagrams below is the tree structure of JVM memory and I will try to throw light on the same (@Adit: please note that area which concerns you is PermGen Space or permanent generation space of non-heap memory).

Heap memory is the runtime data area from which the Java VM allocates memory for all class instances and arrays. The heap may be of a fixed or variable size. The garbage collector is an automatic memory management system that reclaims heap memory for objects.

Eden space: The pool from which memory is initially allocated for most objects.

Survivor space: The pool containing objects that have survived the garbage collection of the Eden space.

Tenured space: The pool containing objects that have existed for some time in the survivor space.

Non-heap memory includes a method area shared among all threads and memory required for the internal processing or optimization for the Java VM. It stores per-class structures such as a runtime constant pool, field and method data, and the code for methods and constructors. The method area is logically part of the heap but, depending on the implementation, a Java VM may not garbage collect or compact it. Like the heap memory, the method area may be of a fixed or variable size. The memory for the method area does not need to be contiguous.

The pool containing all the reflective data of the virtual machine itself, such as class and method objects. With Java VMs that use class data sharing, this generation is divided into read-only and read-write areas.

The HotSpot Java VM also includes a code cache, containing memory that is used for compilation and storage of native code.

Where are the methods of s stored?

Had I created another object of MemoryClass inside myMethod, would JVM allocate memory for the same methods again inside the stack memory?

Stack memory only contains local variables so your ORV (object reference variable) of new MemoryClass would still be created in stack frame of myMethod, but JVM would not load all the methods, metadata etc. of MemoryClass again in "Permanent Generation".

JVM loads class only once and when it loads the class then space is allocated on "Permanent Generation" for that class and that happens only once while the class is loaded by JVM.

Would JVM free the memory allocated to myMethod as soon as it's execution is completed, if so, how would it manage the situation mentioned in question 2(only applicable if JVM allocates memory multiple times to the same method).

Stack frame created for myMethod will be removed from stack memory, so all the memory created for local variables will be cleaned but this doesn't mean that JVM will clean up the memory allocated in "Permanent Generation" for the class those object you have created in myMethod

What would have been the case, if I had only declared s and did not initialize it, would JVM still allocate memory to all the methods of java.lang.String class, if so, why?

Sources of above information and further reading:

Since the arsy's accepted answer and hagrawal's answer's are clear, just want to elaborate on the fourth question :

What would have been the case, if I had only declared s and did not initialize it, would JVM still allocate memory to all the methods of java.lang.String class,if so,why?

Basically while its true that the class data - that has the fields and methods information - is stored in the permanent-generation (meta-space from JDK-8 onwards), it is important to note that its the objects within the java.lang.String class (such as the char[] which holds all the character information for that string) for which data is allocated on the heap.

This does not happen until either a new string object is created - either using the 'new' keyword or by creating a new string literal (Eg: "helloworld").

Not the answer you're looking for? Browse other questions tagged java memory memory-management heap-memory stack-memory or ask your own question.

341
Java heap terminology: young, old and permanent generations?
110
Where does Java's String constant pool live, the heap or the stack?
1
Java - How is memory leak in Java harmful? How can it possibly get used for a bad cause?

4164
What are the differences between a HashMap and a Hashtable in Java?
7446
Is Java "pass-by-reference" or "pass-by-value"?
3783
How do I efficiently iterate over each entry in a Java Map?
9022
What and where are the stack and heap?
3505
What is the difference between public, protected, package-private and private in Java?
4300
Avoiding NullPointerException in Java
4530
How do I read / convert an InputStream into a String in Java?
3466
When to use LinkedList over ArrayList in Java?
3929
How do I generate random integers within a specific range in Java?
3597
How can I create a memory leak in Java?