I just started with OpenGL programming and I am building a clock application. I want it to look something simple like this: http://i.stack.imgur.com/E73ap.jpg

I tried the GL_SMOOTH_POLYGON method mentioned in the Red Book. However that doesn't seem to do a thing.

I am working on a laptop with Intel integrated graphics. The card doesn't support things like GL_ARB_multisample.

What are my options at this point to my app look anti-aliased?

Intel integrated videocards are notorious for their lack of support for OpenGL antialiasing. You can work around that, however.

First option: Manual supersampling
Make a texture 2x times as big as the screen. Render your scene to the texture via FBO, then render the texture at half size so it fills the screen, with bilinear interpolation. Can be very slow (in complex scenes) due to the 4x increase in pixels to draw.

Will result in weak antialiasing (so I don't recommend it for desktop software like your clock). See for yourself: 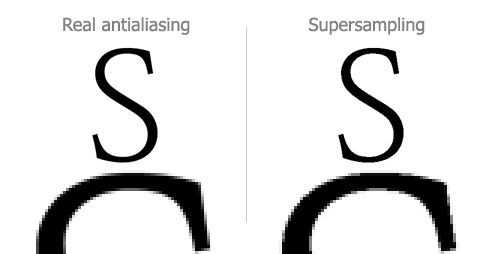 Second option: (advanced)
Use a shader to perform Morphological Antialiasing. This is a new technique and I don't know how easy it is to implement. It's used by some advanced games.

Third option:
Use textures and bilinear interpolation to your advantage by emulating OpenGL's primitives via textures. The technique is described here.

Fourth option: Use a separate texture for every element of your clock.

For example, for your hour-arrow, don't use a flat black GL_POLYGON shaped like your arrow. Instead, use a rotated GL_QUAD, textured with a hour-arrow image drawn in an image program. Then bilinear interpolation will take care of antialiasing it as you rotate it.

This option would take the least effort and looks very well.

Fifth option:
Use a library that supports software rendering -

Such libraries contain their own algorithms for antialiased rendering, so they don't depend on your videocard for antialiasing. The advantages are:

The disadvantage is much worse performance, but that doesn't matter at all for a clock app, and it turns around when you take into account the intelligent-redrawing functionality I mentioned.

For something like a clock app, the fifth option is very much recommended. OpenGL is mainly useful for games, 3D software and intense graphical stuff like music visualizers. For desktop apps, it's too low-level and the implementations differ too much.

Draw it into a framebuffer object at twice (or more) the final resolution and then use that image as a texture for a single quad drawn in the actual window.

Not the answer you're looking for? Browse other questions tagged c++ opengl antialiasing or ask your own question.

660
How do I achieve the theoretical maximum of 4 FLOPs per cycle?
0
Anti aliasing with multisampling in opengl 2.1?
1
How to set OpenGL version?
4
OpenGL SuperSampling Anti-Aliasing?
0
Anti-aliasing/smoothing/supersampling 2d images with opengl
0
Anti Aliasing based on colors (not textures)
3
Disabling anti-aliasing in pygame