Multiple services on the same URL

Currently I'm building a central place to do some common tasks, which a bunch of projects should use and it would be extremely nice to have this (mostly for convenience, I'll admit): 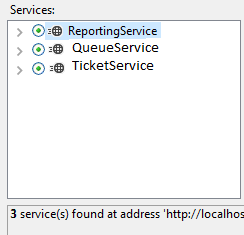 I just can't seem to do that. I've tried implementing multiple interfaces, but that doesn't work the way I want. It exposes too much in the same place. I have a pseudo thing going on right now where I have three services, but on three different addresses (/ReportingService.svc, /QueueService.scv, and /TicketService.svc) and thus the above doesn't happen (ideally just one /Services.svc).

The way the dialog is constructed seems to support this way of exposing services (namely it says "1 service(s) found at[...]"), but I just can't find a way to do it.

I suppose this could be helpful, but I haven't been able to make it work either. I just get a 404 when trying to open the listenUri.

Does anyone have any good ideas?

You need to create your methods in the interface (and obviously implement those methods in your service class).

So, now you have just one service and multiple methods inside of it.

Or if you want to keep your methods organized, you could include services in your Web.config file.

Not the answer you're looking for? Browse other questions tagged wcf or ask your own question.