I have different pc's with the same configurations (Win7 Prof with Office 2013, exact same build-number). I have a excel file which uses the old calendar control of office 2007.

To solve this problem I register with administrator rights the mscal.ocx:

It gives me an success message on every pc. But on some pc's I can not use the old calendar control. 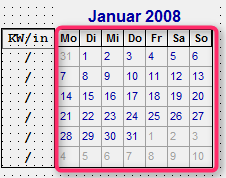 On the pc's that working the calendar control is seen as above in the red square, the pc's it doesn't work the red square is empty and gives the error

I searched and compared the registry on the pc's for mscal.ocx and they are exactly the same. I also added the reference to the mscal.ocx manualy in vba but still the same problem.

Where else can I look to ensure the ocx is correct added? Any idea how to solve it? Thanks

it's common controls you need to get up and running support.microsoft.com/en-gb/kb/2746232

Not the answer you're looking for? Browse other questions tagged vba excel ocx regsvr32 or ask your own question.

1975
How do I create an Excel (.XLS and .XLSX) file in C# without installing Microsoft Office?
516
Is there a way to crack the password on an Excel VBA Project?
559
How to avoid using Select in Excel VBA
29
Excel VBA Code: Compile Error in x64 Version ('PtrSafe' attribute required)
639
How to use Regular Expressions (Regex) in Microsoft Excel both in-cell and loops
2
Excel oleobject cannot delete
1
Office 2013 vba Calendar mscomctl ocx
41
How can I create a calendar input in VBA Excel?