I would like to know a method of making a self-contained (tarball) Linux JDK/JRE with a high font rendering quality similar to that provided by the Freetype project. So far, after:

-- trying out different versions of JDK available for Ubuntu:

(the shape of the # character might be some unrelated font problem, I have no idea)

-- trying out a number of different fonts and sizes, but it seemed orthogonal;

-- switching a number of switches like LCD rendering and antialiasing:

-- following the recipes like "apply some patched packages and scripts from different repos to your Ubuntu derivative", (this did not work for me, at least not some time ago, worked on the distro level and offered a fixed version of the jdk)

-- resigning from Swing and trying to make a GUI in JavaFX instead,

I started to believe that I won't get a font rendering comparable to Freetype. Then I stumbled into Android Studio, which was all of three Java and Linux and a Freetype-like font rendering:

And it turned out it all boils down to the JRE it uses:

I tried to compile OpenJDK from sources with FreeType enabled:

but it does not work - font rendering is still like on the two first images. 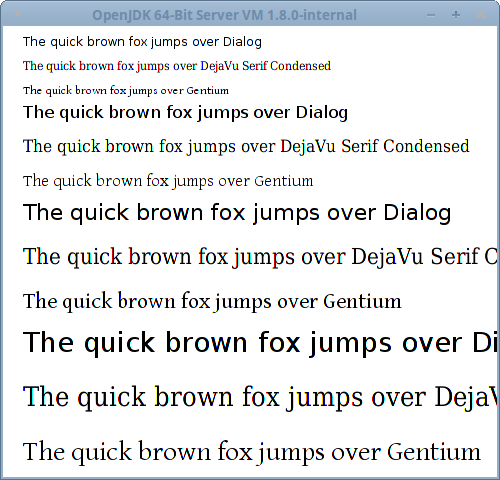 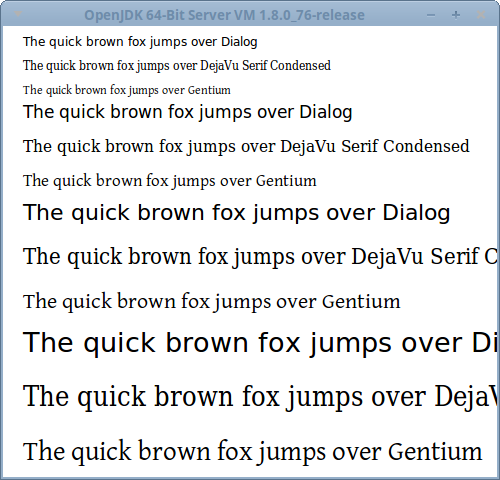 but the renderer which requires proper hints still does a bad job - all of the fonts in the 4th image have flaws:

And thus the questions:

1. Is there a method of preparing a portable tarball (not system-wide modifications) of any recent version of JDK/JRE, which has a font rendering quality similar to that seen in the third/5th image?

has the "traditional Linux Java" font rendering again, can it be that the method used in the case of the third image is a feature later abandoned?

It turns that there is a custom jdk JetBrain OpenJDK, which has a greatly improved font rendering.

Not the answer you're looking for? Browse other questions tagged java linux swing fonts rendering or ask your own question.

793
Dealing with "Xerces hell" in Java/Maven?
255
How to set JAVA_HOME in Linux for all users
0
No JRE 1.8 virtual machine on Mac OS Yosemite
2
java.nio.file not working even with JDK 1.7 in Eclipse
0
Encryption Exception in production environment
0
Why does maven ignores the JDK i installed?