I'm confused about the error(s) in this photo: 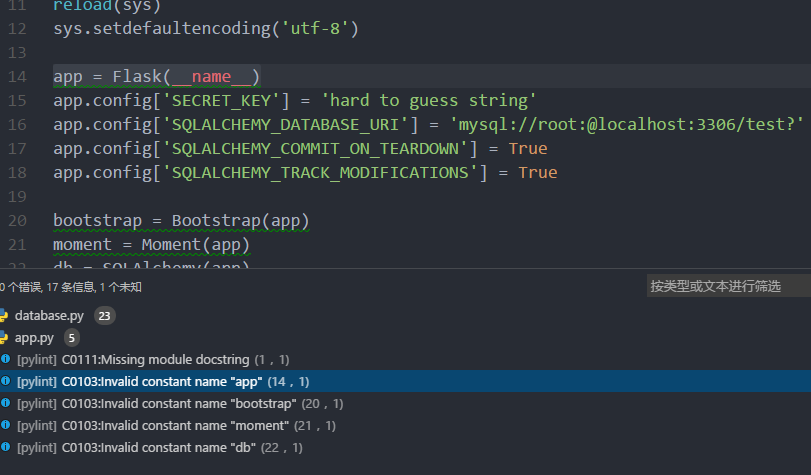 I don't know how to fix them. My program is a Python-Flask web frame. When I use VScode to debug my program, Pylint shows these errors. I know this problem doesn't matter, but it makes me annoyed. How Can I fix it?

As explained by Kundor, PEP 8 states that:

Constants are usually defined on a module level and written in all capital letters with underscores separating words.

The point is that "constants" in python don't really exist. Pylint, as per PEP 8, expects module level variables to be "constants."

That being said you've several options:

In your case I would go with the third option, by creating a build_app function or something similar, that would return the application (and maybe the 'db' object as well but you have several choices there). Then you could add a salt of the second option to get something like:

The fact that PEP8 considers only constants at the module level is probably the reason why many developpers use a dedicated main() function.

PEP 8 decrees that names of constants should be in all caps.

So, rename those variables to be all caps.

Tip: if you google 'C0103' it'll take you to the PyLint messages wiki entry for that message, with details on it.

Rename those variables to be all caps.

you can use the following line at the beginning of your python script and execute it:

It will disable all the invalid constant convention message in static code analyzer.

Not the answer you're looking for? Browse other questions tagged python pylint or ask your own question.