I am trying to understand the OpenGL coordinate system. However, some tutorials say the default coordinate system is left handed (see http://www.c-sharpcorner.com/UploadFile/jeradus/OpenGLBasics11172005014307AM/OpenGLBasics.aspx) and others say it is right handed (see http://www.falloutsoftware.com/tutorials/gl/gl0.htm). Which is correct? I understand that we can transform one to the other by mirroring but I would like to know the default coordinates.

There is some confusion here. 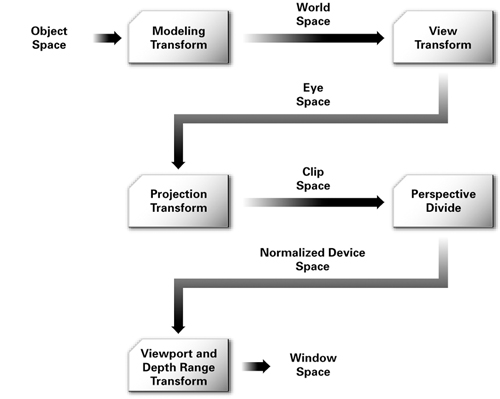 OpenGL is right handed in object space and world space.

But in window space (aka screen space) we are suddenly left handed.

How did this happen?

The way we get from right-handed to left-handed is a negative z scaling entry in the glOrtho or glFrustum projection matrices. Scaling z by -1 (while leaving x and y as they were) has the effect of changing the handedness of the coordinate system. 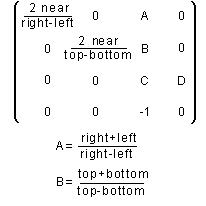 From an orthographic perspective, glOrtho generates a matrix like this: 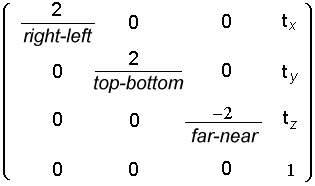 The near and far planes, however, are specified differently. The near parameter is defined as

Here we have a typical canonical view volume 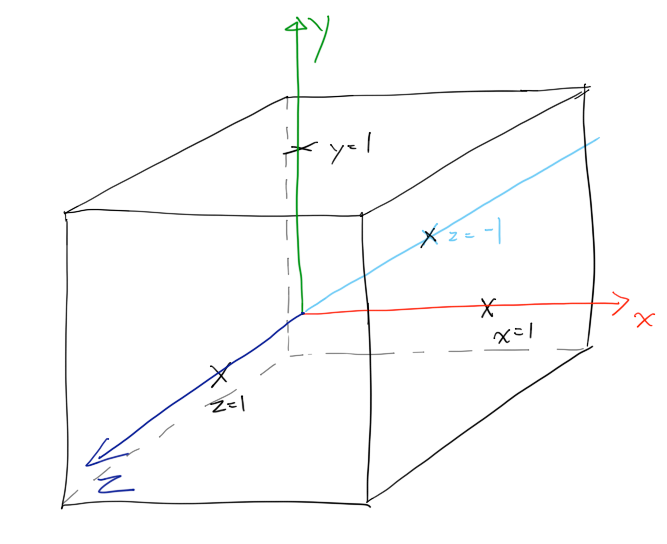 Because the z multiplier is (-2/(far-near)), the minus sign effectively scales z by -1. This means that "z" is turned left handed during the viewing transformation, unbeknownst to most people as they simply work in OpenGL as a "right handed" coordinate system.

So, if you call

Then the NEAR PLANE is 10 units ahead of you. Where are you? Why, at the origin, with the x-axis to your right, the y-axis on top of your head, and your nose pointing down the negative z-axis (that's the default "By default, the camera is situated at the origin, points down the negative z-axis, and has an up-vector of (0, 1, 0)."). So the near plane is at z=-10. The far plane is 10 units behind you, at z=+10.

By default the Normalized Device Coordinate is left-handed.

The glDepthRange is by default [0, 1] (near, far) making the +z axis point into the screen and with +x to the right and +y up it is a left-handed system.

Changing the depth range to [1, 0] will make the system right-handed.

Quoting a previous answer from Nicol: (the strike-through is my work, explained below)

I'm surprised nobody mentioned something: OpenGL works in a left-handed coordinate system too. At least, it does when you're working with shaders and use the default depth range.

Once you throw out the fixed-function pipeline, you deal directly with "clip-space". The OpenGL Specification defines clip-space as a 4D homogeneous coordinate system. When you follow the transforms through normalized device coordinates, and down to window space, you find this.

Window space is in the space of a window's pixels. The origin is in the lower-left corner, with +Y going up and +X going right. That sounds very much like a right-handed coordinate system. But what about Z?

The default depth range (glDepthRange) sets the near Z value to 0 and the far Z value to one. So the +Z is going away from the viewer.

In the fixed-function pipeline, the standard projection matrices (produced by glOrtho, glFrustum and the like) all transform from a right-handed space to a left-handed one. They flip the meaning of Z; just check the matrices they generate. In eye space, +Z moves towards the viewer; in post-projection space, it moves away.

I suspect Microsoft (and GLide) simply didn't bother to perform the negation in their projection matrices.

I did strike one part since it diverged from my findings.

Either changing the DepthRange or the DepthFunc and using the ClearDepth(0) works but when using both they cancelled out each other back to a left-handed system.

You should only notice that OpenGL only knows NDC! and that is a left-handed coordinate system.

Why do we usually use right-handed coordinate system in world-space?

I think it`s conventional. It just does. Maybe it just want to distinguish from DirectX.

According to the book:

I don't fully agree with the "it's neither" but that's probably a philosophical question anyway.

Opengl is definitely left-handed. You see a lot of tutorials stating the opposite because they are negating the z-value in projection matrix. When the final vertices are computed inside vertex shader, it's converting the vertices that you pass from client-side (right-hand coord) to left-handed, and the vertices will then be passed to geometry shader and fragment shader. If you use right-hand coordinate system in client-side, Opengl doesn't care. It only knows normalized coordinate system, which is left handed.

Edit: If you don't trust me, just experiment in your vertex shader by adding a translation matrix, and you can easily see if Opengl is left-handed or not.

By using OpenGL's built in projection and transformation functions, observing the movements on screen follow the rules of the right-handed coordinate system. For example, if an object in front of your view is translated in the positive z direction, then the object will move towards you.

The depth buffer is quite the opposite, and this is where the NDC (Normalized Device Coordinates) come into play. If passing GL_LESS into the glDepthFunc means that pixels will draw when they are nearer to you than what's already in the depth buffer, then pixels are considered to live in a left-handed coordinate system.

Lastly, gluLookAt under the hood has to negate the look-at vector. Since the math assumes a vector is pointing in a positive direction towards the object it's looking at, and a camera looks down -z, the look-at vector must be negated so that it aligns with the camera.

Something to chew on. It doesn't make much sense to call the z direction of a right handed coordinate system a forward vector :). I think Microsoft realized this when they designed Direct3D.

Not the answer you're looking for? Browse other questions tagged opengl coordinates or ask your own question.

5
Why is this image not mirrored vertically?
2
Matrix needed to convert rotations for one coordinate system to another
2
Decomposition of glFrustum in openGL
2
When is Z axis flipped? (OpenGL)
2
What should be the result from a lookat function in a right handed system?
1
Opengl - GLM::Ortho + GLM_COORDINATE_SYSTEM = weird?
2
Why did we chose to orient OpenGL view camera along -z axis?
1
Model View Projection - How to move objects in a world
1
How to use this DXF Bulge Arc function getArcDataFromBulge()?
1
LWJGL: Slick: Drawing fonts in 3D world
See more linked questions