Is the HTML5 Gamepad API limited to only 4 Controllers?

I'm correctly able to get input from 4 controllers through using the HTML5 Gamepad API within a browser.

What I'm having trouble with is getting input from 8 controllers. These being all Xbox 360 controllers, I know there's a legacy limit to the XInput API. But looking at the HTML5 API documentation above, I can't see anything mentioning a limit or how the API is implemented.

navigator.getGamepads(); seems to return an array of 4 undefined spots in Chrome and Edge, and an unspecified array in FireFox that still seems to go to a limit of 4.

You can see Windows 10 verifies I have 8 controllers connected in the Devices panel, and all work individually up to 4 gamepads within the browser. So I'm questioning why the Gamepad API is limiting me here - is it by design of the Gamepad API, or XInput? 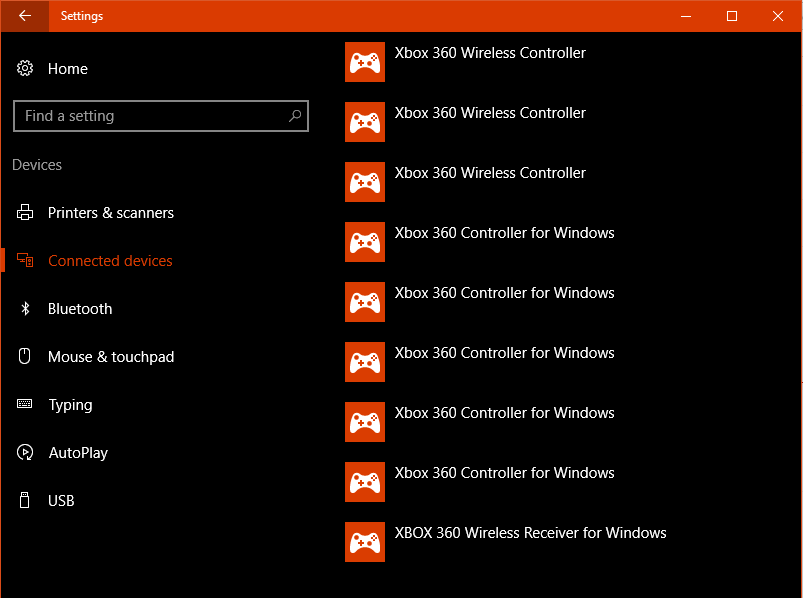 Ok, I've done some extensive research and testing and feel some confidence in answering this.

The Gamepad API spec doesn't define a limit to controllers, as you can see in the linked documentation above.

XInput doesn't seem to be the culprit other than maybe influencing the implementation, because I was able to have a mix of inputs beyond four in Firefox that weren't all recognized in the other browsers.

I think this can be chalked up to bad implementation on the part of engines behind Chrome and Edge, and I can only hope they see the light and Firefox keeps their implementation flexible. Ideally the standard lays down the law unambiguously.

Thus far, every time I've used the GamePad API in Chrome, it's returned an array containing four entries initially. The "About:Help" for my version returns the following information:

When running my code, with one input device attached to my computer, the array contains the following entries:

At the moment I don't have enough spare USB ports to try plugging in more than 3 devices, so if anyone does have the requisite hardware largesse, it will be an interesting experiment to find out what happens if you attach 5 gamepads to your computer, and see if Chrome creates an array large enough for them all.

One other quirk I've discovered is this. You're supposed to press a button on one of your gamepads/joysticks before running any code that calls the navigator.getGamePads() method. This is a security feature to stop web pages listening for your gamepad details, and sending them off to a malicious entity - if you're lucky enough to have blown a couple of thousand pounds on a realistic F-16 HOTAS unit, you don't want this information being sent to scammers. However, in practice, I've found that this doesn't work on my computer. Even after pressing a button several times, my code pops up the dialogue box I coded to say "No gamepads detected". I then dismiss the dialogue, press a button on the joystick, try again, and hey presto, the detection code registers my devices. Whether this is a Chrome quirk, or is replicated in Firefox, I've yet to test.

A thought occurs to me: when testing your browser code, try pressing a button on EVERY attached device, and see if that results in the GamePad API registering all your devices. Though one issue I can foresee, that might complicate your test, is that you have multiple identical devices connected. If you can find a collection of 8 different gamepads, and try that, you might see different results.

There's a range of issues with the GamePad API at the moment, due to the fact that the W3C standard for this API has yet to be finalised - it's still in the draft stage. As a consequence, different browsers have different implementation details, until the developers thereof have a stable standard to work with.

If implementations use the xinput API internally, 4 is the limit, if they are able to recognize Hid in addition to xinput, they could theoretically massage and expose more through the w3c API but it can get convoluted and error prone especially with multiple devices entering and exiting..

I found that if I plug in multiple controllers, and then unplug some with lower indexes, on chrome numbering stays even after refresh, while on mozilla numbering stays only until refresh. This makes me think chrome actually takes the data from Windows (hence the length 4), while mozilla does it by itself.

Not the answer you're looking for? Browse other questions tagged javascript html gamepad gamepad-api or ask your own question.

809
HTML text input allow only numeric input
2419
Storing Objects in HTML5 localStorage
3905
Change an HTML5 input's placeholder color with CSS
895
Using HTML5/Canvas/JavaScript to take in-browser screenshots
2555
Round to at most 2 decimal places (only if necessary)
1
HTML5 Gamepad API not working
1
Microsoft Edge does not detect gamepads
0
Arduino joystick to web gamepad
3
Is there a way to use the HTML5 Gamepad API with multiple windows or tabs in Firefox?
18
How to detect joy-con input/motion controls in HTML5 JavaScript