What are the differences between service orchestration and service choreography from an intra-organization point of view.

Basic technologies (such as XML, SOAP, WSDL) provide means to describe, locate, and invoke services as an entity in its own right. However, these technologies do not give a rich behavioral detail about the role of the service in more complex collaboration. This collaboration includes a sequence of activities and relationships between activities, which build the business process. There are two ways to build this process: service orchestration and service choreography.

Service orchestration represents a single centralized executable business process (the orchestrator) that coordinates the interaction among different services. The orchestrator is responsible for invoking and combining the services.

The relationship between all the participating services are described by a single endpoint (i.e., the composite service). The orchestration includes the management of transactions between individual services. Orchestration employs a centralized approach for service composition. 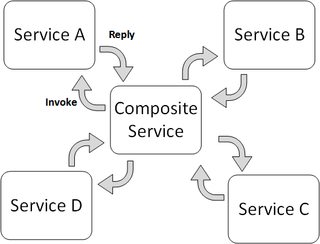 Service choreography is a global description of the participating services, which is defined by exchange of messages, rules of interaction and agreements between two or more endpoints. Choreography employs a decentralized approach for service composition. 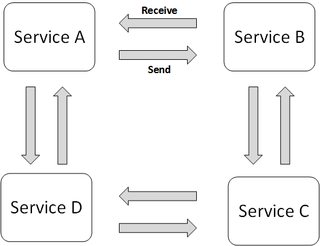 Service orchestration: you put together several services by a fixed logic. This logic is described at a single place. You can imagine a team of people with a manager doing micro-management. The manager precisly tells what, when and who should do. The team members do not care of the entire goal of the job, the manager combines the outputs into a single deliverable. A practical example is a BPEL process. BPEL process contains the logic, can invoke several services and combine their responses into a single service response.

Service choreography: the decision logic is distributed, with no centralized point. You can imagine a home, where everybody aims for the common good and works pro-actively without micro-management. Or you can imagine a human body, where different members are interdependent and work for the common goal. A practical example is event driven processing, where an agent is activated by an event and does its job. All the agents make a system together. There is no centralized logic. Choreography possibilities may go farther beyond orchestration as it is more aligned with the real world.

My opinion is that we do not need to distinguish much between these two, as we need to focus on the business logic. Where a single point of logic does the job, we do orchestration. Where a problem cannot be covered by a centralized logic, we are forced to choreography anyway. That is why we often come accross orchestration in IT, whereas choreograhy remains more an academical concept and a subject for research. And very often we do choreography without actualy knowing it, as in the real world.

Since the thread is old but still writing to it for those who will stumbled here in search of this question as I did. This is much debated question in Service-oriented architecture (SOA) which needs much cleaner explanation for beginners. 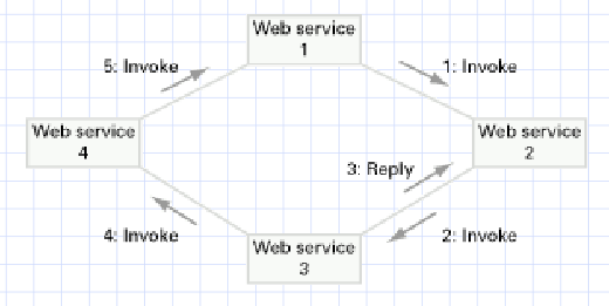 Andrei and others did a good job explaining what is orchestration and what is choreography. For the software architect choosing between these two alternatives, it is also important to compare them with respect to different qualities.

An orchestration solution might introduce a SPOF if the orchestrator element doesn't employ a mechanism for high availability. Thanks @Deepak por pointing this out in a comment.

Orchestration is useful when you have control over all the actors in a process - when they're all in one domain of control and you can dictate the flow of activities. This is of course most often when you're specifying a business process that will be enacted inside one organisation that you have control over.

Choreography is a way of specifying how two or more parties - none of which has any control over the other parties' processes, or perhaps any visibility of those processes - can coordinate their activities and processes to share information and value. Use choreography when coordination across domains of control/visibility is required. You can think of choreography, in a simple scenario, as like a network protocol. It dictates acceptable patterns of requests and responses between parties.

Another way to look at Service Orchestration vs. Choreography:

I'd say choreography is well suited internally for highly decentralized organizations. You won't need a central business process executor. This facilitates independent growth and development by each of organization sub-units.

(I subscribe to this interpretation of orchestration vs. choreography question: http://geekexplains.blogspot.com/2008/07/ways-of-combining-web-services.html)

One can use both choreography and orchestration is the same system as we have done in our product. Various actors performing various tasks dispatched to them are choreographed by the event pub/sub system via events they generate. For example, when a prime mover carrying a container arrives at a warehouse, that event, which is subscribed by the warehouse manager app, prompts the warehouse manager to activate the resources to unload the cargo. But when exceptions happen, such as the forklift to carry the load breaks down, that event starts an orchestration engine (a workflow processor) to orchestrate the task for various actors as per the exception handling workflow to handle the exception.

In orchestration, there is a conductor and there are instrument players. Players play according to how conductor conducts. If conductor is replaced, the harmonic expression will be different i.e. it is still the same play (service) but with a different outcome. For example, to provide a financial arrangement proposal, the orchestration service will conduct by asking (invoking) each player (entity or utility service, e.g. credit check) to play (return results or adjust/update its playing) according to conductor's template (business rules). In choreography, there is a choreographer and there are groups of dancers. Choreography is a direction, but each group of dancers is autonomous in how to realize that direction.

Both orchestration and choreography are two philosophies of process formalism at large scale, i.e. collaboration spaces. A collaboration space is a formal representation for an industry, for example health industry, food industry, automotive industry or ... . So you should have some service providers at small scale able to speak some language of communication before you decide to orchestrate them or use choreography to supply some demand meaningful to end-consumer.

Orchestration typically follows what has been famous as middleware in distributed systems. Some good tooling examples within IT industry can be Juju, Zapier IFTTT. You have centralized control, auditory, modification and trouble shooting over services you consume.

Choreography is more decentralized than orchestration in the sense that it accepts more autonomous collaborators. For example bitcoin network is a collection of service providers called nodes which collectively provide a Defi service namely distributed ledger functionality to its service end-consumers. But this does not have any centralized authority in charge, and there is no total-view over whole network. There is just a consensus machanism that if respected candidate service provider joins the network and participate in end-consumer service provision. Anywhere you need to attack trusted third party and its side effects such as corruption, an orchestration would not suffice.

Again any collaboration among actors in any industry can be subjected to orchestration or choreography, so I hope limiting examples only to IT industry is not misleading.

Also I can add, naming suggests analogy between the two and stage performance. In an orchestra, every instrument player is harmonized with other team members if he/she follows the single conductor. On the other hand analogous to stage dancing in choreography there is no conductor, each stage dancer only harmonize himself/herself with his/her partner (better if spoke as peer), with no single point of harmonization leadership. But still both present harmonization to viewers.

1
Reduce async communication overhead in a micro service architecture
7
Why do sagas (aka, process managers) contain an internal state and why are they persisted to the event store?
1
Microservices: Service discovery/ circuit breaker for Event-driven architecture
0
How can I atomically (or at least properly) create User in the system with multiple bounded contexts?
-2
Term choreography in openshift Vs Container Orchestration in kubernetes
1
Microservice architecture design question