I only found information on SO as to the difference between NgZone.run(), but not between these two functions.

For answers with only a reference to the doc, please illustrate some practical scenarios to choose one over the other.

Checks the change detector and its children.

It means, if there is a case where any thing inside your model (your class) has changed but it hasn't reflected the view, you might need to notify Angular to detect those changes (detect local changes) and update the view.

1- The change detector is detached from the view ( see detach )

2- An update has happened but it hasn't been inside the Angular Zone, therefore, Angular doesn't know about it.

Like when a third party function has updated your model and you want to update the view after that.

Because this code is outside of Angular's zone (probably), you most likely need to make sure to detect the changes and update the view, thus:

** You could wrap that third party function inside a zone.run :

** You could wrap the function inside a setTimeout :

3- There are also cases where you update the model after the change detection cycle is finished, where in those cases you get this dreaded error :

"Expression has changed after it was checked";

This generally means (from Angular2 language) :

I saw an change in your model that was caused by one of my accepted ways ( events, XHR requests, setTimeout, and ... ) and then I ran my change detection to update your view and I finished it, but then there was another function in your code which updated the model again and I don't wanna run my change detection again because there is no dirty checking like AngularJS anymore :D and we should use one way data flow!

Couple of ways to fix it :

1- Proper way : make sure that update is inside the change detection cycle ( Angular2 updates are one way flow that happen once, do not update the model after that and move your code to a better place/time ).

2- Lazy way: run detectChanges() after that update to make angular2 happy, this is definitely not the best way, but as you asked what are the possible scenarios, this is one of them.

This way you're saying : I sincerely know you ran the change detection, but I want you to do it again because I had to update something on the fly after you finished the checking.

3- Put the code inside a setTimeout, because setTimeout is patched by zone and will run detectChanges after it's finished.

Marks all ChangeDetectionStrategy ancestors as to be checked.

This is mostly needed when the ChangeDetectionStrategy of your component is OnPush.

OnPush itself means, only run the change detection if any of these has happened :

1- One of the @inputs of the component has been completely replaced with a new value, or simply put, if the reference of the @Input property has changed altogether.

So if ChangeDetectionStrategy of your component is OnPush and then you have :

This will not update the obj reference ,hence the change detection is not gonna run, therefore the view is not reflecting the update/mutation.

In this case you have to manually tell Angular to check and update the view (markForCheck);

So if you did this :

You need to do this:

Rather, below would cause a change detection to run :

Which completely replaced the previous obj with a new {};

@milad described the reasons why you potentially could need to trigger change detection manually.

As I said, this guy doesn't trigger change detection at all. It simply goes upwards from the current component to the root component and updates their view state to ChecksEnabled. Here is the source code:

This approach is often used in the ngDoCheck lifecycle hook. You can read more in the If you think ngDoCheck means your component is being checked — read this article.

See also Everything you need to know about change detection in Angular for more details. 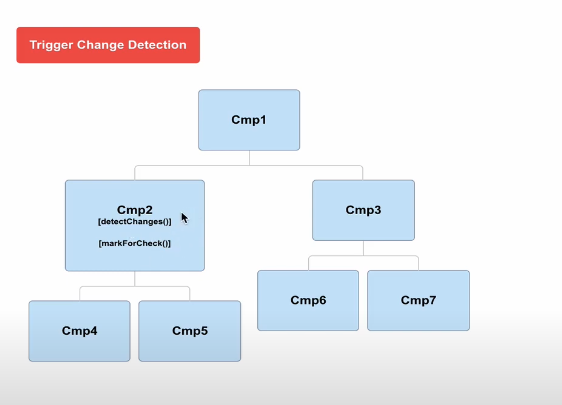 cd.detectChanges() will run change detection immediately from the current component down through its descendants.

Not the answer you're looking for? Browse other questions tagged angular angular2-changedetection or ask your own question.

16
Angular 4: `ExpressionChangedAfterItHasBeenCheckedError: Expression has changed after it was checked
16
Updating boolean in AfterViewInit causes "Expression has changed after it was checked"
9
Angular onPush does not update child property from parent
4
Nativescript Use LIstPicker with JS object
8
Render time-based Observables in Angular without overwhelming change detection
6
What are the implications of bootstrapping multiple components
7
Angular markForCheck vs detectChanges
3
ChangeDetectionStrategy.OnPush doesn't act how I expect it to
5
My breakpoint in Angular's change detection is not triggered on checkAndUpdateView()
5
Angular. Why calling markForCheck() results to view update
See more linked questions